Cubic Zirconia is a motley assemblage of music makers, a group that dabbles in house, […] 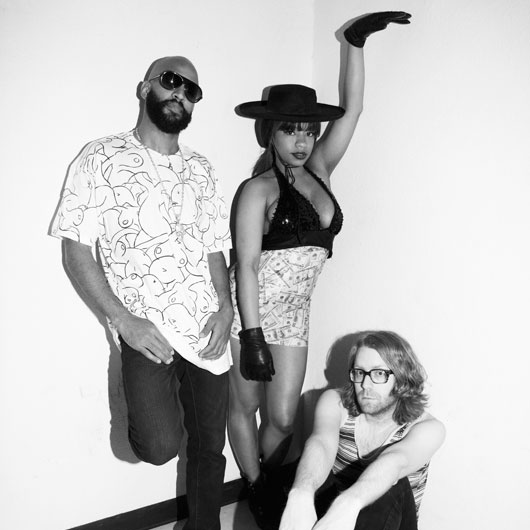 Cubic Zirconia is a motley assemblage of music makers, a group that dabbles in house, […]

Cubic Zirconia is a motley assemblage of music makers, a group that dabbles in house, disco, electro, R&B, and hip-hop, but can always be relied upon to deliver plenty of sleek, slinky synths (courtesy of Nick Hook and Daud Sturdivant) and sultry funk (courtesy of stylish frontwoman and former XLR8R covergirl Tiombe Lockhart). Over the past year, the DIY trio has released a number of singles (“Fuck Work,” “Black & Blue,” “Josephine,” “Hoes Come Out at Night”), all of which were accompanied by crush-inducing videos with Lockhart front and center. The group also found the time to remix Kid Cudi and Egyptrixx, but most of their efforts went into the debut Cubic Zirconia full-length, Follow Your Heart, which comes out in February on LuckyMe. Curious to sample some of the sounds inspiring CZ’s wide-ranging sonic palette, we asked Hook and Lockhart to share some of their recent favorites.

Krystal Klear
Tried for Your Love
All-City
Another great record from Dublin’s All-City label. Four dusty, analog-laced synth tracks. It’s got the early-’80s rollerskating/BBQ feel we love, a sound that’s blown up this year with Dam-Funk leading the pack. Two standout tracks: “Dekryptic” and Hudson Mohawke’s re-work of the title track. Hud Mo’s remix has a great New York ’90s piano-house feel that’s been working great in our DJ sets and for our lives in general.”Tried For Your Love”

Azari and III
Into the Night
Scion AV
We met Cedric from Azari and III around 6 a.m. after DJing Egyptrixx’s release party in Toronto. From what we can recall, he played their songs for us on MySpace and called us “boo” MANY times. We love this band so much. You can tell the production cats have all the ill synths and drum machines and are working them to perfection. Cedric’s vocal is always touching.”Into the Night”

Drop the Lime
Hot as Hell
Trouble and Bass
DTL 3.0 begins here. Drop the Lime traded in his LFO in for harmonicas and guitars, but still kept it ready for clubs. We see the haters coming for this one, but it seems like the logical progression in DTL’s growth. He’s never afraid to take a chance to push new ground. Canblaster delivers my favorite remix of the bunch, as horses and flutes battle gunshots with ravey chords as a backdrop. Probably a good look to begin riding Canblaster’s dick now. “Hot as Hell” (Canblaster Remix)

Kanye West
My Beautiful Dark Twisted Fantasy
Def Jam
“Fat booty Celine Dion”… “We met at Borders”… “Yeezy reupholstered my pussy”… You know, we were very confused before about how to write our next record. It’s very clear now. Thank you. “Power”