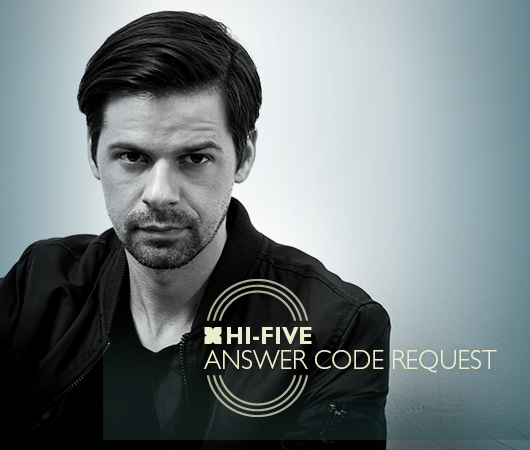 It feels like a severe understatement to say that Berlin’s Ostgut Ton imprint has been on something of a tear over the past year or so, but even amongst the label’s all-but-bulletproof release schedule, a few artists have managed to stand out. One of them is Answer Code Request (a.k.a. Patrick Gräser), who officially joined the Ostgut Ton roster earlier this year with the Breathe EP and followed it up this week with the release of Code, his stellar debut full-length. These efforts—not to mention Gräser’s excellent DJ and live sets as a Berghain resident—make him a natural fit for the Ostgut Ton roster, but we wanted to explore his relationship with the stalwart techno label a bit further. As such, we invited Answer Code Rquest to take part in our Hi-Five series with a simple caveat—he had to select his five favorite tunes from Ostgut Ton’s storied catalog.

For me, this is one of the best and strongest tracks under Ostgut Ton. You can hear the sound collaboration of both Rene (Shed) and Marcel [Dettmann] in this track, 50/50 from each. What I love most about it is the creaking of the sequence that modulates persistently towards the end. Less is more, as exemplified here. Veritably “Twerp Wiz” is the [most frequently] played track in my sets.

A typical Nodge signature sound. Minimalist yet very functional and a personal favorite of mine in the Ostgut Ton [catalog].

LB Dub Corp “I Have a Dream feat. Benjamin Zephaniah”

When I first heard this track, it pretty much went past me. But as I listened more during the flights to my gigs, it sort of grew on me. From the melody to the warm sub-bass to the vocals of Benjamin Zephaniah, this track has that special depth and mood. The whole album is both so varied and suitable for clubs at the same time.

Shed “The Lower Upside Down”

“Miniluv” was featured in Ben Klock’s Berghain 04 mix CD. Martyn is one of the most versatile artists and is an appropriate representation for Ostgut Ton. “Miniluv” not only fits into house sets, but also into techno and other genres. The heat of the bass and the elements fit perfectly with each other. Despite the broken-beat approach, this track exudes a certain energy, a Martyn energy.