Over the course of the past decade, DJ Q (a.k.a. Shollen Quarshie) has dipped his […] 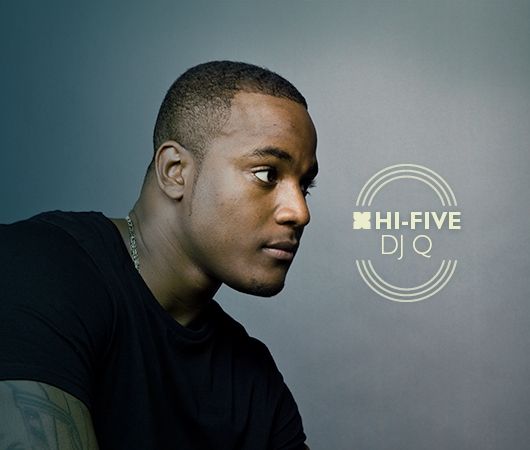 Over the course of the past decade, DJ Q (a.k.a. Shollen Quarshie) has dipped his […]

Over the course of the past decade, DJ Q (a.k.a. Shollen Quarshie) has dipped his toes into various strains of UK dance music, including grime, bassline, and garage. That being said, he’s probably best known for his work in the latter genre, and has demonstrated a real talent for melding pop sounds with more inventive underground rhythms. Quarshie heads up his own Q Recordings imprint, but in recent years, he’s also become one of the core artists on London’s Local Action label, which will soon be issuing his debut LP, Ineffable. Ahead of the album’s official release on March 31, we figured that an artist with such a wealth of musical knowledge would be a perfect subject for our Hi-Five series. DJ Q was up to the task, and racked his brain a bit before coming up with a list of his favorite UK garage bootlegs. Most of his selections are from the seminal late-’90s 2-step era, but he couldn’t resist slipping in one newer cut that nonetheless sports an undeniably classic sound.

I used to listen to this all the time and think to myself, “This is the style of garage I want to make.” Beats, vocals, bass, and organs! Brasstooth is a producer who’s had a lot of influence on the music I make. This track especially. Every time I use pianos in tracks, I always base them slightly on the ones in this track. This track reminds me of being back in school too; I used to love this track so much I learned how to replay it using the composer on my Nokia phone and it was my ringtone for ages!!

Industry Standard “Got Somebody Else”

There have been a few mixes of the original track by Changing Faces, but this one nails it! Vocal chops, that classic M1 Organ, and drums that swing! What more can you ask for? I remember buying my first ever tape pack from one of the stalls in Huddersfield Carnival around 1998 and this track was the one that stood out to me from the tapes. I [only] got to find out who it was actually by a few years later after some hard research. Hearing it always takes me back to those times.

Brandy & Monica “The Boy Is Mine (Architects Remix)”

Brandy on UK garage never gets old. I remember exactly where I was when I first heard this track too. It was at one of the youth club parties; I remember walking in and hearing this track and thinking, “WTF is this?” I loved it from the minute I heard it and I still love it now. Classic remix. I loved this track so much that I remember remaking the track on the “music” game on the original PlayStation, but then getting annoyed because I couldn’t get the drums to swing the way they did in this version.

K Warren “When I Close My Eyes (Dub Mix)”

This one is a remix of the R&B track “When I Close My Eyes” by Shanice. Back when I was in music class in school, it was the end of the year, so our teacher let us bring our own music in and we all got to play one track each. I took a tape from a Hysteria tape pack and played this song. You should have seen the look I got from the rest of the class. Everyone was playing stuff from the charts and there was me coming through with the underground garage. Everyone told me to turn it off, but funnily enough, as garage started to get more popular, everyone wanted to borrow tapes from me!

I had to include this one. Even though it’s not even a year old, I can tell I’m gonna be playing this one for a long time. The first time I heard it, it felt like I’d heard it years before. For me, it captures the essence and vibe of the scene back in 1998. It’s a track that I listen and think, “Damn, I wish I made this!” I don’t say that about many tracks, so that says something.