We’ve been charting the progression of Welsh beatmaker Doc Daneeka (a.k.a. Mial Watkins) for quite […] 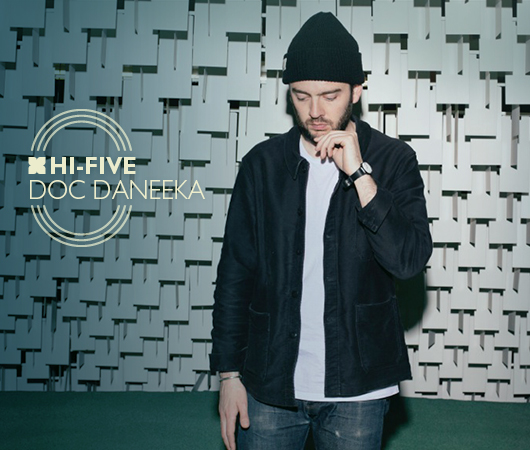 We’ve been charting the progression of Welsh beatmaker Doc Daneeka (a.k.a. Mial Watkins) for quite […]

We’ve been charting the progression of Welsh beatmaker Doc Daneeka (a.k.a. Mial Watkins) for quite some time—he first was singled out as one to watch in our Bubblin’ Up series in 2010, and delivered an exclusive XLR8R podcast shortly thereafter. Back then, Watkins was turning out a particularly percussive brand of UK funky-leaning house, but in the years that have followed, he’s shifted his sound toward propulsive, club-centric sounds. (He’s also founded his own label, Ten Thousand Yen, joined up with the 50Weapons camp, and relocated to Paris following a stint in Berlin.) Last year’s anthemic “Walk On In” single for Glasgow’s Numbers imprint was one of XLR8R‘s best tracks of 2013, and its follow-up, “Treptow” b/w “Paname (Piano Vers),” which dropped on Numbers last week, prompted us to enlist Watkins for the latest installment of our Hi-Five series. Both of Doc Daneeka’s new tracks prominently feature the piano, so we asked him to dig through his archives and select a few of his favorite tunes that highlight the iconic instrument.

Olivia “I Need Love (A Deep Need For Love Remix)”

This was the first tune on a Lil’ Louis mix from ’91 that had such a massive influence over me. Rupert (xxxy) passed it to me in 2010 and I listened to it religiously. Although my girlfriend at the time said it sounded like the music her mate’s mum, who was a pro, listened to when they were kids, I loved it. When that piano comes in, you just need to be wide-eyed in a crowd, pumping it!

This is not such a straight piano tune, but somehow, it’s pulled through by the piano. The way he hits those offbeat chords on the second verse kill me every time. I must have listened to this track 5000 times by now.

One of the greatest gifts my father gave me. Bill Evans: jazz demi-god. Something about him completely runs true for me. I don’t know whether it’s the fact that his dad was a Welsh choir leader, but I kind of feel he has those somber, male voice/choir-type cadences running through his work, which still gives me a strong connection to home and to our singing culture. On a side note, the intro to this is just insane.

Change “Angel in My Pocket (Extended)”

Piano-led banger. I’ve never heard this in a club, but if I did, there’s a high chance I’d throw my drink over my shoulder and go nuts. It’s a pure drink spiller.

Possibly a bit played out by now, and indeed I’ve finished many a set with it, but damn… I challenge anyone to still not be excited by that end break with the PIANOS.

This list is in part dedicated to one of the finest—Ocean—who I believe shares pretty much this same view!