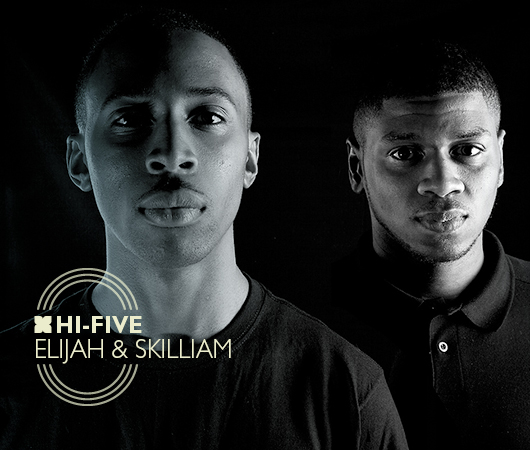 First surfacing during a time when most people were eager to claim that grime was “over,” London’s Elijah & Skilliam have spent the past several years pushing a colorful, high-energy variant of the genre, both through their Butterz label and Rinse FM broadcasts. (It’s worth noting that the pair’s XLR8R podcast from 2010 is still an excellent listen.) Nowadays, grime has essentially been fully reanimated, and though a new crop of up-and-coming producers has emerged, there’s little question that Elijah & Skilliam remain at the forefront of what’s become a truly international scene. On May 19, the duo’s entry in Fabric‘s esteemed Fabriclive mix series will be released. The diverse effort finds Elijah & Skilliam skewing toward newer selections, but when given the chance to speak with the pair, we found ourselves wanting to know more about their past. As a result, for this edition of Hi-Five, the London selectors have elected to look through their archives and come up with five tunes from Wiley, one of grime’s most storied figures. More importantly, the tracks they’ve chosen demonstrate why, in their own words, “Wiley is king.”

This was part of Wiley’s infamous ZIP Files free download, in which he leaked over 100 of his tracks a few years back. He worked so well with Maniac, it is a shame they didn’t get a chance to work together more. This, “Bow E3,” and “Grime Kid” as an MC and producer combo are probably our favorite ever. The way he samples Chipmunk in this track is pretty clever; wish we put this out really. For the American readers, “141” is a number you put before a telephone number if you want to withhold your information.

He shows up all the MCs on this track, again from those ZIP Files; it’s shocking he gave this away. He’s on production too—only Skepta comes anywhere near Wiley in terms of being a prolific producer and MC at the same time.

Wiley is his best when at war with other MCs, and he has never backed down from a clash. This is also my favorite production from him by far; he had a few similar sounding beats at the time, but the structure and intensity of this one always wins for me. Once you listen to this song, it is hard to get into anything present day that has taken cues from his productions, because none top this.

Under the alias Phaze One, Wiley sampled Nicole Wray’s “Boy You Should Listen” and this came as his first release in 2001. To this day, it is still an underground classic. It doesn’t really match up with the rest of his more known music styles, which is why it stands out. You don’t have to be a hardcore grime or Wiley fan to enjoy it. Both this Geeneus (a.k.a. Wizzbit) remix and the original get regular spins at our Jamz party.

This was one of the first riddim-style instrumentals that we came across in grime, and it feels like Wiley made a bit of a statement by not doing a version himself at the time. It is stripped to the basics—there is no melody or anything in sight. It’s a perfect DJ tool. The simplicity in the structure makes it perfect for an MC to tear apart and get their point across, especially with the cheeky breakdown in the middle. The most prolific version is Dizzee Rascal’s.