Hi-Five: Forest Swords Discusses Five Albums He Was Listening to While Making His Debut LP 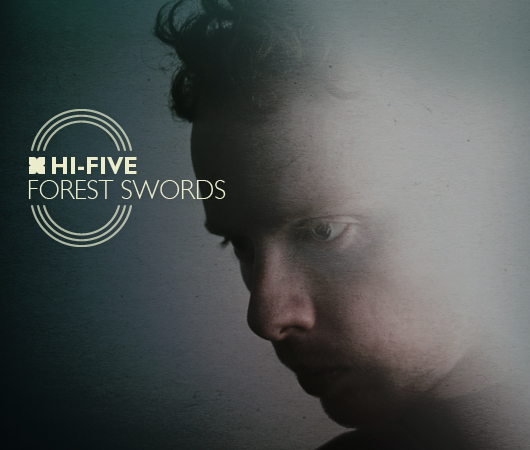 Hi-Five: Forest Swords Discusses Five Albums He Was Listening to While Making His Debut LP

Earlier this month, shadowy UK producer Forest Swords released his first full-length, Engravings, via the Tri Angle label. The widely praised LP combines darkly colored abstraction with beatwork that borrows heavily from hip-hop and R&B, and drenches the results in thick layers of reverb. There’s little question that Forest Swords has cooked up a unique sonic brew, prompting many to wonder about his influences. In search of some answers, we asked the British artist to select some tunes for our Hi-Five series, and he responded with an eclectic list of albums that both soundtracked and shaped the making of Engravings.

I discovered this a couple of years ago and fell in love with it. It’s a very early dub album, and it’s actually very flat and minimal—there’s barely anything there a lot of the time. It’s so empty. It’s claustrophobic in places, like you’re in the room, and lacks much of the huge trippiness and studio trickery of later dub. It’s superb; bare bones.

I started to revisit this record after I rewatched a documentary about the making of the album. Bjork talked about honing in on microscopic sounds and rhythms, and then zooming out again and never losing sight of the bigger song. It was definitely inspiring in terms of the way I approached tweaking the sounds I chose for Engravings, and the smaller minutiae of what’s going on across it. The melodies and layering on this record are some of the best Bjork has done. I’m always curious to see where she takes her music.

Robin, who runs Tri Angle, heard an early version of [my album] and compared some of the sounds to RZA. I’d actually never really listened properly to Wu-Tang before, so I started delving into their back catalog. This record is astonishing, and in turn it definitely filtered back into what I was doing towards the end of Engravings, and the way I approached working through the top layers of rhythm and texture. It sounds so dusty, and sounds absolutely beautiful on vinyl. I caught them at Primavera in Barcelona last year and it was brilliantly chaotic.

Engravings was particularly stressful to make in places, and I started seeking out albums that felt soothing on some level. It ended up with DJ Screw a lot of the time—pretty much every one of his tapes has a brilliantly selected tracklist, and they’re always perfectly sequenced. It’s got that hip-hop bounce I craved, but is halfway towards being droney, a bit dreamy perhaps. The tempo he kept a lot of these tracks at definitely connects—it just sounds “right” for me. It makes your vibrations a little higher just by slowing everything down a bit. I love how his sound veers between being almost warming and reassuring, and actually pretty intimidating and cold in places. It’s great to hear it shift depending on his song choice.

A friend of mine recommended me this series and I loved it instantly. Borden is a composer, and did a lot of music experimentations and meditations in the ’70s and ’80s, taking these huge journeys into counterpoint and minimalism, with lots of different parts. The Continuing Story of Counterpoint and its different components were written over about 10 years, I think. They move and sway in really fascinating ways—it’s very skilled and focused because it’s so repetitive and engaging. It really taught me a lot about the power of keeping it minimal when the temptation is there to pile layers on layers. He was actually commissioned to write the score for The Exorcist at one point, but it didn’t get used.