Graze burst onto the scene with a flurry of quality material in 2013, dropping a […] 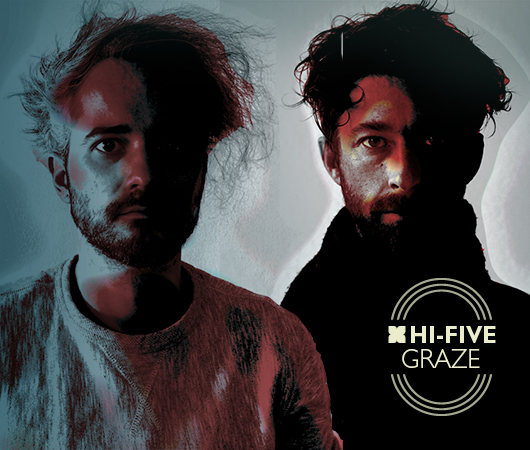 Graze burst onto the scene with a flurry of quality material in 2013, dropping a […]

Graze burst onto the scene with a flurry of quality material in 2013, dropping a stellar self-titled EP and quickly following it up with a solid debut LP, Edges, prompting us to name the Canadian-born duo the year’s best new artist. 2014 has been a little quieter for Adam Marshall and Christian Andersen, although the pair has still managed to release a handful of singles and a second LP, Soft Gamma Repeater, which dropped just this month. Graze’s sound is a unique one, as the duo combines the sensibilities of the UK’s hardcore continuum with a more techno-oriented framework, a hybridized approach that probably speaks to its members’ varied histories with electronic music. Curious to hear more about the sounds that shaped their combined musical outlook, we got Marshall and Andersen to put together a list of tracks they described as “bittersweet classics for after the club.” When asked to elaborate on the theme, the pair clarified that it was talking about “the early techno and jungle that mined the territory between sadness and decay and hopeful futurism.” And though the Hi-Five series usually only asks for five selections, the boys of Graze felt inspired enough to choose a couple of extra “bonus tracks” for good measure.

Adam Marshall: I bought this track as part of a compilation called Panic In Detroit, which was released on a Belgian label called Buzz in the mid ’90s. Almost all of the tracks on this compilation hit a very emotive, yet restrained note, especially this Carl Craig remix of Kenny Larkin’s “Serena X.” The compilation as a whole defined a certain mood/atmosphere for me, one which I have only rarely found again. With contributions from many of Detroit’s key second-wave artists, in addition to tracks from John Beltran and A Guy Called Gerald, this whole release really stands out—for me at least—as a great snapshot of where techno was going, outside the confines of the club.

AM: Chicago was putting out some really forward-thinking house in the early ’90s, which was tough and bumping, but also quite deep and introspective. This cut from Derrick Carter on Organico, under his Sound Patrol alias, will always be one of my favorite tracks of that time. With heavy 909 kicks amongst a sad, delicate melody, the track trips through 10 minutes of tough, bittersweet grooves. It’s made for the club, but it has a certain emotional heaviness to it, which always works like a charm for an early-morning dancefloor refresh. Many of Derrick’s Sound Patrol tracks mined this vein of dance music, including the gorgeous “Trippin’ Among the Stars” and the slow and spacey “Rising And Falling.”

Christian Andersen: Only a small group of people were making high-production, extremely edited jungle with atmospheric elements while the “jump-up” variant of the genre was reigning supreme. With the days of amazing 2-stepping drum & bass like Krust’s “Warhead” firmly behind us, I was much more apt to have tracks on Paradox Music in my record crate, though this particular flavor was rare and I would often transition my sets between light-feeling tracks such as this and the dark and brutal sounds of old Biotic and Penetration releases.

AM: Anything off this second Artificial Intelligence compilation brings back cloudy memories of long, post-party drives from the Midwest back to Toronto. This Link track in particular, from Global Communication’s Tom Middleton and Mark Pritchard, perfectly formed a slow-moving, weightless bubble of sound that was the perfect soundtrack after a long and loud night out. The whole compilation could loop on repeat for hours, happily unnoticed, as we shared the driving duties.

AM: The whole Electro-Soma album on Warp (which this track is from) perfectly bridged the emotional divide between idealistic hope and muted reality. This is some south-facing techno, with a distinctly introspective and dystopian flavor. I had an old cassette of this in a car that a friend and I drove across the Canada one winter, and as it was the only music in the car—apart from the AM radio—it’s firmly lodged in my memory as the soundtrack to the entire journey. It always seemed like a perfect accompaniment to a late-night drive along a snowy highway, where you feel like you’re zooming through the vacuum of space.

CA: The album Lunatic Harness was given to me in my teens by my then girlfriend’s older brother. He was a sometime collaborator with the likes of Knifehandchop, Belladonnakillz (RIP), and Skeeter and was a big part of my introduction to the noise/glitch/drill & bass/IDM/whatever culture here in Toronto during the ’00s. The album has been a sort of sonic codex for me since the first listen. This is a prime example of the playfully emotive sound that was much of my introduction to electronic music. The sampling techniques and emotive synths contrasted by the aggressive drum programming and often mind-bending rhythm manipulation was more inspiring to me than anything else I had heard to that point.

CA: This track always reminds me of the future that drum & bass conjured in my mind when I would listen to it back then. This simply is the genre in my mind. It is the Boymerang break at its finest. “Silver Blade” and “Deadly Deep Subs” were on heavy rotation in my youth and played a huge part in inspiring me to spend a king’s ransom on vinyl over the following years. Were it not for tracks like this, or maybe this track specifically, I may never have been inspired to play jungle, or DJ, and none of this may have happened.