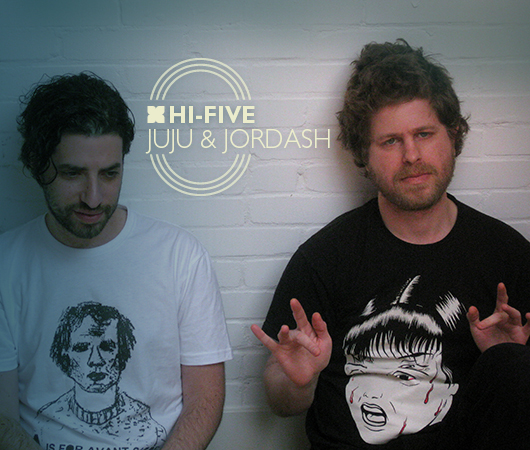 This week, Amsterdam-based duo Juju & Jordash (a.k.a. Gal Aner and Jordan Czamanski) is releasing Clean-Cut, its fourth full-length and the follow-up to 2012’s stellar Techno Primitivism. Touted as a “tighter, more honest” affair, the new album once again finds the Israeli-born pair utilizing its impressive hardware arsenal and crafting tracks with a uniquely improvisational approach. Of course, Aner’s and Czamanski’s ability to work on the fly didn’t come from nowhere; the two have been making music together for years, and both have extensive jazz backgrounds. And while this biographical factoid has often been mentioned in articles and conversations relating to Juju & Jordash, the duo has rarely been asked to elaborate on its love of the genre. As such, we took the opportunity to ask Aner and Czamanski to put together a list of some of their favorite jazz tunes for the latest edition of our Hi-Five series.

Gal Aner: Being probably my favorite jazz composer, it was hard to choose just one Monk tune, but this is in my opinion a fine example of everything that makes him so special and great. There is a haunting, sentimental melody on top of a typical, geniusly twisted chord progression, yet somehow everything feels so natural and honest. The studio version starts with a beautiful celeste introduction and soon after, the band joins in. And what a GREAT band that is. (Max Roach = THE man.)

Jordan Czamanski: I’m not really that into live shows; I like consuming most of my music safely behind locked doors. But I would have been willing to go way out of my comfort zone to sit in this audience back in 1961. This recording encapsulates almost everything I love about jazz. Actually, music in general. The frantic spontaneity of Eric Dolphy, the subversive teasing of the quite rigid song structure, and the simplicity of the theme. To me, Eric Dolphy sounds like liberation. He manages to express freedom without ever actually leaving the strict confines of bop. Not abandoning the traditional song structures makes him sound more subversive than if he abandoned those structures. I find it fascinating. Going by the rules while sticking up your middle finger. I know it’s super presumptuous. But beyond the intellectual stuff, I just feel like I know Eric Dolphy on a personal level after listening to his recordings. That’s communication on a primal level—and perhaps what music is all about. Mal Waldron’s laid-back, soft-toned accompaniment against Dolphy’s frantic phrasing makes this one of my favorite jazz recordings. If only life felt that way…

The Art Ensemble of Chicago “Illistrum”

GA: Free jazz at its best! Fantastic and intense explorations of rhythms and otherworldly lyrics. Sirens, whistles, bells, and a ton of other percussion known as “little instruments” make this amazing group improvisation sound so rich. This recording drew me deep into the AEOC world of musical wonders.

JC: Now this is a dream team. You’ve got Oliver Nelson on sax(es), who’s sort of an unsung jazz hero. His name doesn’t pop up as often as one would expect. Freddie Hubbard on trumpet, Eric Dolphy playing a wonderful flute solo, and then you’ve got Bill Evans, the Debussy of jazz or something like that, playing his beautiful crazy chords underneath all the horns, together with one of the tightest possible rhythm sections: Paul Chambers and Roy Hanes. The theme is a simple take on the traditional blues structure, just adding some bars (or subtracting—however you wanna see it), but the melody is just so stunning. This theme is so delicate, yet epic. Monumental. This whole recording is perfect and the standout moment for me is Oliver Nelson’s solo starting at 4:16. Besides it being a wonderful melodic solo played in a uniquely delicate tone, you get to hear some light touches of the legendary engineer Rudy van Gelder. Check out the sweet reverb at 4:48—so subtle but so meaningful.

GA: This track, recorded in 1972, is as mind-blowing to me today as the first time I heard it (about 20 years ago), or even moreso. From the proto-techno sequences to the awesome handclap on the right speaker, through to Herbie’s amazing Rhodes solo, the crazy drum breakdowns, and the spaced-out, bubbly ARP2600 sounds, everything here is electrifyingly funky and superbly produced.