The house music stalwart lists the five tracks that influenced him the most. 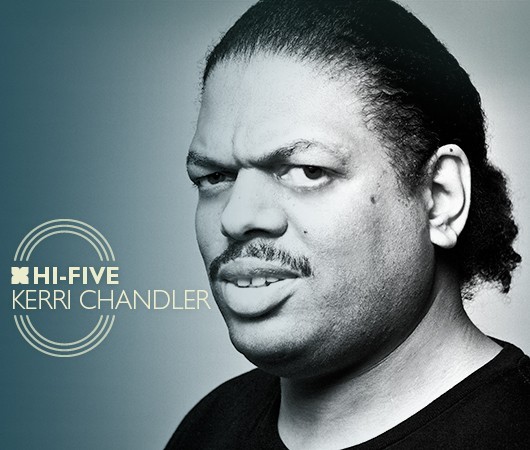 The house music stalwart lists the five tracks that influenced him the most.

When it comes to East Coast house figures, there aren’t many artists whose influence looms larger than that of Kerri Chandler. The New Jersey native is perhaps best known for playing a key role in the development of the ’90s garage house sound, but he’s remained incredibly active over the past two decades. During the past few years, he’s re-started his own Madhouse imprint, which was essentially dormant during the ’00s, and has also launched Madtech, an outlet for darker, techier offerings, many of them by up-and-coming producers. (Krystal Klear, Citizen, Lakosa & iO, and Waze & Odyssey are just a few of the artists that have released on MadTech.) After more than 25 years in the game, we found ourselves wondering about the music that shaped Chandler’s artistic vision. As such, we invited him to put together the latest edition of Hi-Five; his selections are intriguing, but more importantly, Chandler has provided some quality anecdotes about exactly how these tracks made their mark on him.

I was playing a party with my dad and my uncle. I was 13, and a girl comes up and yells to my Uncle Arnold, “Your speaker’s on fire!” He brushed the girl away like, “Yeah, yeah…” She comes back and tells him, “Really Mister! Your speaker’s on fire!” And then he looks across the room and one of the subwoofers was literally on fire! With flames coming out of it! So he and his friend jump down off the stage, run to the speaker, unplug it, and wheel it outside. I’m running behind them looking at this and watching them try to extinguish the fire. So they unscrew the back of the box and I’m just watching the embers move thru the frame—the paper was just gone! People were still partying and dancing through all of it. So I had to know what song was on—it was Hamilton Bohannon’s “Let’s Start the Dance.” I still play it sometimes and have a laugh about the moment.

It made me want to become an audio engineer and inventor. I used to sit for hours and look at the album covers, trying to figure out what gear was in the pictures. Then I’d sit and try to make what I thought that they possibly were with spare parts I had leftover from other projects.

Everything I love about house, all wrapped up in one record. The first time that I heard this song was in a movie, F/X. It was at the very end of the movie [during] the closing credits and I just sat there alone listening to it. I couldn’t believe the harmonies. I had to know what it was, so I stayed to read the credits and found out they were dance artists named Imagination from the UK. I had the pleasure of meeting the lead vocal singer, Leee John, many years later, and we became friends.

I didn’t know it then, but I found one of my best friends and a great teacher when I heard this—Francois Kevorkian. I used to sit for hours and pull apart the sounds, trying to figure out how it was all put together. Some of it was still a mystery until I heard the actual multi-track and discovered the layers sitting on top of each other, like a phased saxophone riding on top of a vocal as a layer.

The first time that I heard the drums on this song, I was shocked by the drum tone. Most records I heard did not have that punch. I needed to figure out what it was. It was a need. So I began tracking down what it might be and I found out it was a TR-909. That began my love of modifying machines and I’ve been “Chandlerizing” them ever since.