Having previously held down an infamous Sunday-night residency at Glasgow’s Sub Club for 13 years, […] 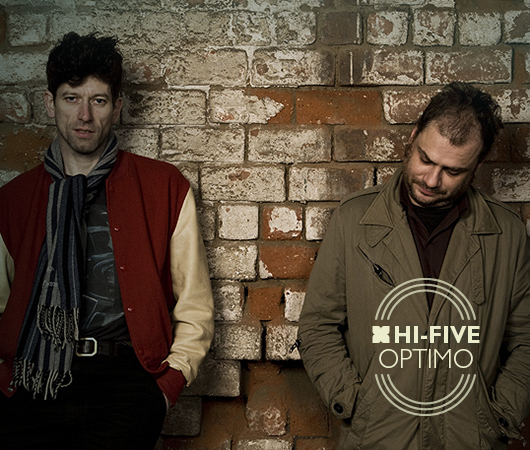 Having previously held down an infamous Sunday-night residency at Glasgow’s Sub Club for 13 years, […]

Having previously held down an infamous Sunday-night residency at Glasgow’s Sub Club for 13 years, it’s fair to say that Optimo (the duo of JG Wilkes and JD Twitch) knows a thing or two about DJing. The pair has contributed to just about every mix series worth its salt, and although the two DJs have been invited to showcase their talents everywhere from Fabric to Panorama Bar, they maintain a firm belief that “Glasgow is the greatest city for partying on the planet.” Apart from their duties behind the decks, the Optimo boys also head up an eponymous label that’s now half a decade old, and have steadily grown the imprint into a reliable outpost for homegrown talent such as LUMA, Golden Teacher, and Divorce. Considering all of their Scotland-centric activities, it’s no stretch to refer to the men of Optimo as true aficionados of the country’s leftfield music scene; as such, it makes sense that ahead of the duo’s set at The Last Big Weekend festival this Sunday in Glasgow, JD Twitch has volunteered to take us through some of the best jams that have emerged from his homeland over the years.

If only he had made more music, I think Robert Rental might have been a Scottish Arthur Russell. He doesn’t sound anything like Arthur, but the few pieces of music he left with us come from a similarly unique part of the soul. I might have listened to this more than any other record ever made, but I still get something from it every time I hear it. I also have an occasional musical project with Neil Landstrumm named after this song.

Thomas was Mr. Rental’s best friend, both of them hailing from a small town down the [River] Clyde from Glasgow. I am massively addicted to early ’80s DIY records and this is one of greatest. So unique, so haunting. The vocal is quite muted, as apparently he didn’t want to wake his sleeping girlfriend when he recorded it.

I often like particular tracks by artists rather than necessarily being a fan of them per se. This is the only Fingerprintz song I love, but it is a beast of a tune. It’s also an accidental discotheque smash. I think now is the best time I have ever known for great music being made in Scotland, but the late ’70s/early ’80s came very close.

Many people in Scotland have a complicated relationship with the bagpipes. We tend to only ever hear the same annoying tourist-bait tunes being played ad infinitum, but the pipes are a beautiful instrument when in the right hands (or mouths), as this all-time favorite from semi-Scots Test Dept. clearly demonstrates.

Okay, so I released this one, but even if I hadn’t, it would still be on the list. Golden Teacher is one of the most exciting bands to come out of Glasgow in the last few years, and this demented, hypnotic juggernaut of a track was its initial calling card. It perfectly encapsulates so much about music that I love that I emailed to ask if I could release it even before I had finished listening to it.