Under the name Morri$, Philesciono Canty spent the past few years turning out a series […] 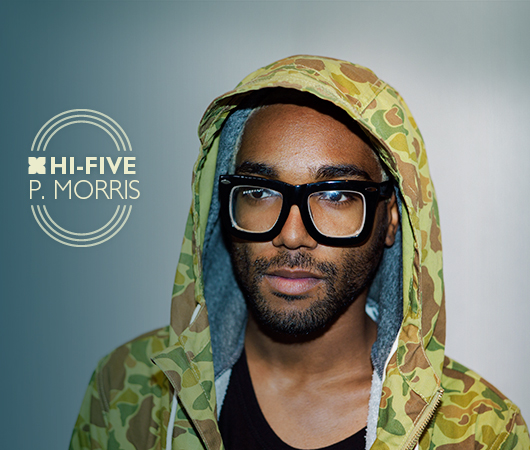 Under the name Morri$, Philesciono Canty spent the past few years turning out a series […]

Under the name Morri$, Philesciono Canty spent the past few years turning out a series of sharp, percussive productions that not only put him in the company of labels like Night Slugs and Fade to Mind, but also prompted a number of collaborations with like-minded beatmaker Sinjin Hawke. Now, Canty has shifted gears, as the LA transplant kicked off 2014 by adopting the handle P. Morris and followed up the announcement by issuing his first-ever mixtape, the appropriately titled Debut, via his own Bear Club Music Group imprint. (It’s also streaming on a custom-built interactive website.) Curious to find out more about Canty’s musical lineage, we enlisted him for our latest Hi-Five, and he responded with a handful of go-go tracks; having spent many of his formative years in Washington, DC, the local, funk-born genre was a major influence, and Canty has shared a few of his favorite cuts.

“NoMEE” is eight minutes of glory, blending Kanye’s “All of the Lights” with a pitched-up vocal sample and heavy dub overtones. I’m not sure where or when this was recorded, but this is the anthem, and almost like the platonic idea of a go-go tune to me—all of the elements are there.

“Gucci Bandana” is one of the first go-go joints I heard that featured the “bounce beat,” as it’s called. I think this dropped around 2008, but a lot of the go-go I’ve heard since then has just gotten slower and slower, with each take on the bounce beat grittier than the one before. This one was a sign of the times for me.

Along with the Reaction Band, TCB was one of the first younger groups I remember breaking through. The guitars made its tracks share some similarity with some of the older go-go floating around in the late ’90s—like the Junkyard Band—but also has that modern bounce flavor that the kids love now. “Bust It Wide Open” undeniably cranks.

Reaction “Lay It Down”

All of the best go-go is recorded live. Every time I hear this cut, I literally feel like I’m in the room with these cats bouncing! In DC, this joint is a bonafide hit. Around 5:20, the bounce beat is hitting super hard with crazy dub overtones, and that is the highlight of the song to me, even though it’s at the very end.

This tune has a ridiculous energy. Around the three-minute mark, all hell breaks lose. I’m not sure what block they’re shouting out, but this joint makes me wish I was from there. I don’t know a lot about this band, but I think they’re pretty young and definitely killing it.