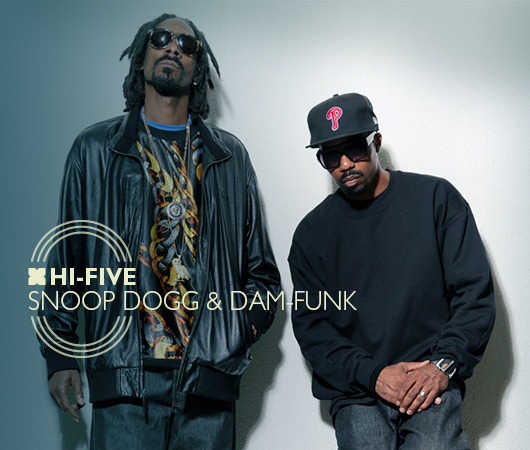 Although the coming together of G-funk mastermind Dam-Funk and legendary West Coast MC Snoop Dogg is the sort of collaboration that makes perfect sense, we never actually thought it would happen. Thankfully, Snoop and Dam felt otherwise, and next week, their joint 7 Days of Funk project will release its self-titled debut album via Stones Throw. Apparently, the pair’s partnership was initially based on the artists’ mutual admiration for each other’s work, which prompted us to do a little bit of digging for some additional details. Specifically, we asked Dam-Funk to pick his five favorite Snoop Dogg tracks of all time, and incredibly found that Snoop was willing to return the favor. Their selections have been catalogued in this latest edition of our Hi-Five series, and as one might expect, the resulting feature just might be the most G-funk’d thing we’ve ever published on XLR8R.

This is a great production by DJ Battlecat with laid-back, on-point lyrics and flow by Snoop. Additional funk-flow vocals by Kokane laced it all up real nice. This is one of my favorites. I rode to this joint continuously upon release of The Last Meal.

Dope collaborative joint by Snoop Dogg with Tha Eastsidaz (Goldie Loc and Big Tray Deee), again with production by DJ Battlecat. G-Funk was progressing and at the same time becoming more “refined” when this dropped. Snoop was on-point as usual with his delivery and style, and Goldie Loc and Tray Deee held it all down in top form too. This was a dope party and ridin’ joint upon its release, and was considered totally fresh when it dropped here in LA.

This is a well put together song that enjoyed radio play here in LA. Using elements of SLAVE’s classic “Watching You,” it was great to hear Snoop sing and stretch out into a grooved-out, funk music bed, provided (this time) by Pharrell Williams. This video was one of my faves of Snoop’s too. Just a great song that the ladies loved, as well as the fellas. It worked well in the clubs where folk actually danced or at the very least, caught a two-step at a party. Another solid Snoop joint, for me.

7 Days of Funk “Faden Away”

I can’t even lie. This is my favorite song right now, period.

This is my shit right here, especially when cruising through the Eastside of the LBC. Always gotta remember where you came from.

Another one of my favorite Dam beats.

Here’s another dope collabo I did with Mayer Hawthorne. This Dam-Funk “G-Mix” though, is on some “Computer Love,” Zapp & Roger-type shit.

Dam’s tracks always come with his signature slap. We might have to do a special remix for this one!