Next week, South London Ordnance will issue the Contact EP, his second release in what’s […] 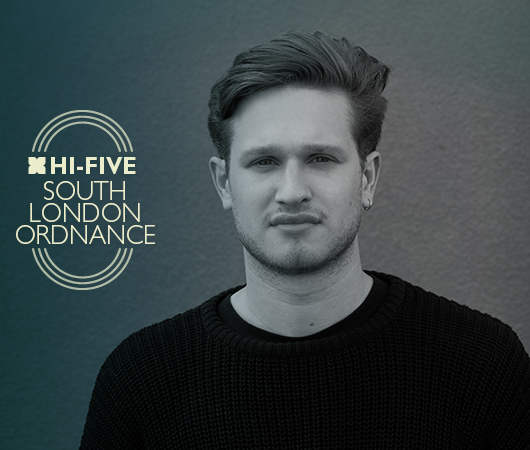 Next week, South London Ordnance will issue the Contact EP, his second release in what’s […]

Next week, South London Ordnance will issue the Contact EP, his second release in what’s shaping up to be a busy 2014 for the UK producer. The four-track effort also finds him returning to Scuba’s Hotflush label, which was responsible for last year’s “Revolver” b/w “Transmission Funk” 12″. However, beyond that, it’s hard to say much more about the current state of South London Ordnance. He’s clearly a talented artist, and one who colors his techno-leaning creations with dark and driving tones, but he’s also someone that generally prefers to let the music do the talking, even when it’s seeing the light of day via his own Aery Metals imprint. In an effort to dig deeper, we invited the London producer to put together the latest edition of our Hi-Five series, and his response was, well, interesting, to say the least. Most artists use Hi-Five as an opportunity to highlight some of their favorite tunes, but South London Ordnance’s mind went to advertising; specifically, he compiled a list showcasing some of his favorite syncs. (For those unfamiliar with the term, a “sync” is when a song is licensed for use in a commercial, movie, television show, videogame, etc.) It’s an unusual direction, but when one considers the increasingly central role of licensing within the music industry’s many mechanizations, South London Ordnance’s choice of topic is actually quite timely.

Absolute classic—Pirelli collars Richard James for “Garden of Linmiri,” released under his Caustic Window alias in ’93. Carl Lewis pelts it round a track before performing various messianic feats, including running on water and then vertically up the Statue of Liberty. Towards the close of the advert, Lewis lifts his sole, revealing the metallic tread that has allowed him to do all this—a nice parallel to AFX’s own work with the machines that helped provide the soundtrack.

Classic BOC, released in 2000 as part of the In a Beautiful Place out in the Country EP. By no means a personal fave, but it certainly bears all the hallmarks of the Scottish duo’s most popular work—shuffling, crushed percs, woozy synth lines, and so forth. The ad itself features a slightly nerve-wracking premise, as a woman prepares to dive head first into a swimming pool with no water in it. It contrasts well with the Sandison brothers’ downtempo lope, which I assume is the idea.

I feel bad. I can’t find the link for this [advert], but I promise it’s out there—it’s just evading me today. Obviously, this isn’t the most famous Leftfield sync—Guinness had “Phat Planet” off Rhythm and Stealth soundtrack its “Surfer” advert to great effect, but I’m not a massive fan of that one, so we’ll go with “Black Flute,” which is a decent track.

I’m cheating slightly here. It’s obviously not an advert, but I make no apologies. Seminal game, seminal soundtrack—I could have picked anything off the Wipeout 2097 OST, but this is genuinely one of my favorite tracks. Pure apocalyptic breaks.