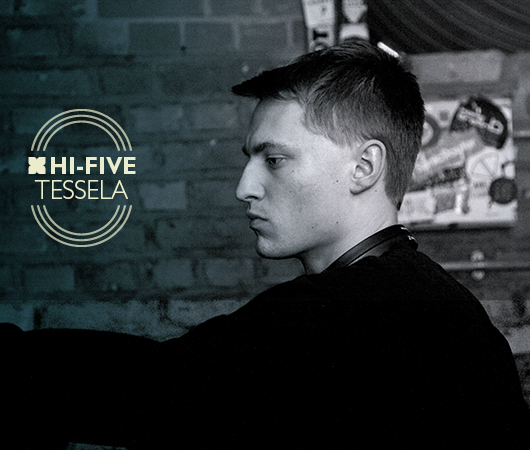 Hailing from England’s West Country, Tessela isn’t a producer who’s afraid to reference the golden era of rave in his work. His latest effort, the Nancy’s Pantry EP for R&S, offered an unobstructed view into Tessela’s ability to reinvigorate these decades-old sounds, pushing skillfully chopped breaks through rushes of warehouse-ready chords and industrial percussion. Given that, we figured that Tessela likely knew his way around a stack of ’90s rave records better than most, which is why we asked him to pick out five of his favorite classic hardcore jams. In response, he’s turned in a list that is properly loaded with chorded stabs, cheesy vocal loops, and—of course—lots of breaks.

The percussion and programming on this track would be impressive if this was released today, let alone in 1990! I accidentally bought the paper-thin “DJ Promo” 12″ of this, but I still play it all the time.

A friend of mine put me onto this one, and the whole thing is great. There is something really satisfying about those drums, they almost sound like they’re being squeezed down a tube or something. It’s no nonsense and to the point—there’s not a single element in there that isn’t vital to the track.

Although I was only one year old when this was released, I’m guessing it was pretty ahead of its time. This was one of the early records on Warp that was released at a time when music started becoming really interesting for me. I played this at my brother’s wedding recently and had my mum on the phone the next day trying to sing it back to me asking who it was. For a woman who normally listens to Classic FM, I’d say that’s 10 points to Nightmares on Wax.

This is pretty much the perfect hardcore record—a catchy riff, a cheesy vocal, and about 50 different sections. Magic.

I could have chosen one of 20-plus records from Moving Shadow’s back catalog, and I’m honestly not sure why I’ve gone with this particular one. Maybe it’s because it has an immediate, instant gratification. Maybe it’s because it’s Friday and I’m onto my second Duvel. Either way, this is pure rave-anthem madness. It’s also got a brilliant break to sample towards the end.