The music of Luke Wyatt (a.k.a. Torn Hawk) is many things, but perhaps the easiest […] 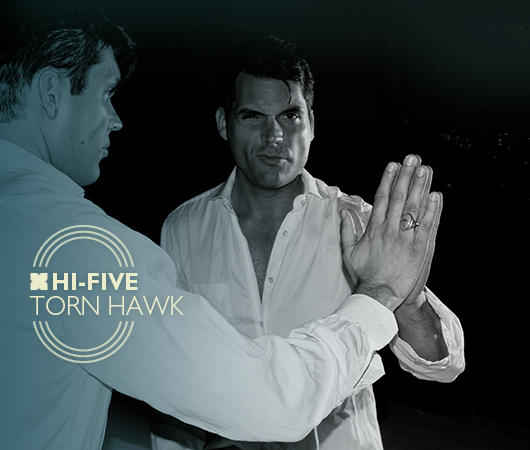 The music of Luke Wyatt (a.k.a. Torn Hawk) is many things, but perhaps the easiest […]

The music of Luke Wyatt (a.k.a. Torn Hawk) is many things, but perhaps the easiest way to describe it is complex. A press release for his forthcoming full-length offering, Let’s Cry and Do Pushups at the Same Time, suggests the Berlin-via-Brooklyn producer and video artist is after a “reconciliation of aesthetic irony with compositional sincerity and emotional vulnerability,” a description that could just as easily be applied to the catalog of ’80s-era British rock group Dire Straits. Ahead of his album release next week via Mexican Summer, Wyatt has assembled a sort of primer that lists—in no particular order—five Dire Straits songs worth a serious listen.

Torn Hawk: I don’t know why Mark Kozelek is throwing around Dire Straits as a pejorative, comparing them to The War on Drugs. I do agree that The War on Drugs is kind of just pleasant, white-guy guitar pap, also heavily derivative of Tom Petty, but they will never be in the same league as Dire Straits, a truly accomplished group of musicians with a couple of admittedly dumb (mostly cuz of the lyrics) songs. But the good songs are really good.

This is not ironic. I believe these are great songs. And Mark Knopfler is one of the greatest guitarists of all time. His playing (fingerpicking on a Strat) is so inventive and fresh and never resorts to wanky blues cliches. He really cares about melody, not just the jam. His tone and lines are so elegant, especially in the pre-“Money for Nothing” days. I’m also obsessed with his sadcore soundtrack for the Irish film Cal.

“Down to the Waterline”

A taut piece of work. Luling tones fog into a rubber-band solo at the opening, and from 2:45 to 3:12 we have possibly the best guitar music ever made. Weirdly reminds me of Maurice Deebank’s work with Felt. This whole record is amazing, with “Sultans of Swing,” of course, and “Wild West End,” and “Lions.” This record is so solid. Elegant, minimal bar rock. Nice spare use of delay and volume pulls throughout.

Has one of the most epic, eminently tasteful (no extra notes) Knopfler solos starting around the six-minute mark. The solo goes from gentle to acrobatic but is always intensely emotive, with Roy Bittan from the E Street Band picking up on piano at the end. Good to run to; take a run while listening to this and it will help you make tough decisions or solve problems.

The rest of this record is kind of fluff with some dorky joke songs thrown in, but this one track is sweepingly beautiful. Broad, cinematic melodrama. At around 3:00, this loping inspirational guitar figure starts. Borderline schmaltz.

Goosebump factory if you stop being uptight and surrender to the sax. Safe sleaze for moms. Conjures a foggy alley, Ridley Scott-lite, rom-com noir. Does this play over the credits or when the spurned guy is walking around full of regrets?

Lush keyboard pads came to the foreground on Brothers in Arms, nowhere more than on this classic. Heard this on so many bad car stereos from age six on and it’s never not gripped me. Sort of a lazy, gooey grip. Before I’d ever had a girlfriend—when I was like 10 or something—I imagined this was what it was like to miss somebody. I paid tribute in this ragged version where I played over top of a destroyed loop here.