This week saw the release of Dasaflex, the sophomore album from London duo Dusk + […] 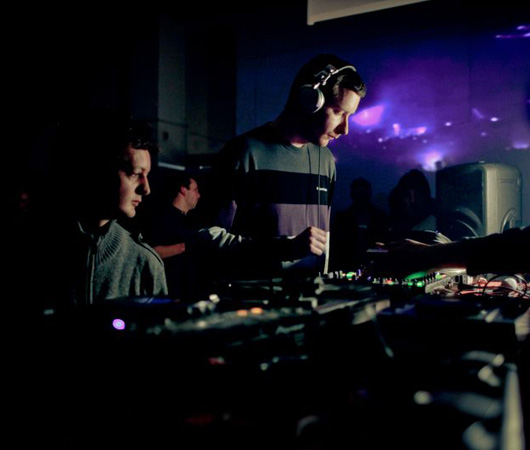 This week saw the release of Dasaflex, the sophomore album from London duo Dusk + […]

This week saw the release of Dasaflex, the sophomore album from London duo Dusk + Blackdown. While the dark and shadowy outfit is certainly known for its production chops, the pair, particularly Martin “Blackdown” Clark, is also known for its deep knowledge of urban UK grooves. As such, we figured the two beatmakers would be excellent candidates for our High Five series, in which artists reach back into their memory banks—along with YouTube’s search engine—and select five meaningful tracks from their past. Dusk + Blackdown not only did that, but they even sent along a brief mission statement explaining the motives behind this particular round of online crate digging.

We’ve tried to pick out five of the best tunes from the myriad of unlabelled D90 cassette tapes that for some reason have been kept under the bed: scratched, stretched, and held together with sellotape. Not tunes that necessarily influenced anyone else, but ones that have stuck with us over the years. To narrow things down, we stuck with British producers and tunes from 1990-92. If you missed them the first time round, we hope you enjoy them. If you didn’t, we hope they bring back some happy memories. (If you’re throwing up now, delete this last sentence.)

We recall a mate having this on 12″ and bringing it along to a school disco so he could do the dancing-on-the-spot dance to it. [The song] has aged pretty well and it was a joy to dig out the live performance on YouTube. [There’s] so much positive energy. And at a time when most hip-hop was 90 bpm-ish, the flow sounds almost grimey in its tempo.

A couple of unlikely lads from Sheffield here, our first lesson in the danger of the sub-low: “Get out while you can, ’cause we’re losing Hertz…” Subs, pseudo-bleeps, horns, and donks: nice. Reckon the instrumental would sound pretty funky at 45…

We remember this sounding insanely fast. It certainly rubbed a few people up the wrong way; seem to recall a well-known magazine sneering it would appeal more to the hardcore crowd than the hip-hop one. That might have been the case, but hip-hop was almost ready to peak, whereas hardcore’s star was only just beginning to rise. As a bonus, the tape sleeve included the lyrics, so you could try rapping along if you fancied a challenge. We didn’t.

These days, original breaks and samples are only a click away. But back then, you either needed to be born into a cool family, be in the right place at the right time for the funk bootlegs, or trawl the charity shops hoping a trainspotter had pegged out recently. Tunes like this opened our ears to the world of funk. The shout to Westwood at the end is nice too; well before he became the panto villain on Radio 1, his Capital Rap Show was absolutely essential listening.

The Rebel MC’s influence spreads far and wide. Not only responsible for releasing his own genre-mangling mishmash of bleeps, breaks, and ragga vocals, his remix of this Demon Boyz tune was an absolute classic. Written 20 years ago but still sounding fresh and edgy, it’s amazing how many of its musical elements are still in use in bass music today.