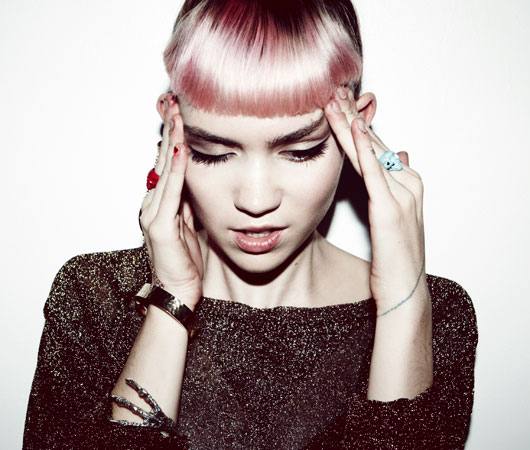 Claire Boucher has been on something of a winning streak over the past couple of years. Starting with a 15-song cassette debut in 2010, the Montreal-based artist known as Grimes has quickly developed from her beginnings as a nascent experimentalist into the darling of homemade pop music with the quiet release of a second LP and her more celebrated split EP with fellow Canadian d’Eon, Darkbloom, in 2011. Now, as Boucher sits merely weeks away from the release of her third album, Visions, via 4AD (along with her own Arbutus imprint), she already seems poised to ascend to a whole new level.

When listening to the bouyant hooks from “Oblivion” and the oddly serene beats on “Genesis,” some of Grimes’ current influences are a bit obvious right off the bat; the haunting falsetto of Cocteau Twins’ Elizabeth Fraser and contemporary Asian pop music’s aberrant giddiness immediately come to mind. And yet, there’s far more at work inside the 13 multi-layered pop tunes featured on Visions, so we thought it necessary to have Boucher give us five examples of the kinds of sounds that helped fuel its creation. It turns out that she owes quite a bit to her diverse musical “family” in Montreal, but still has a lingering soft spot for R&B and dance pop. Grimes gives us the details in her own words, below.

Blue Hawaii is a band that needs to get really famous. They’re a big part of my family in Montreal, and this song especially is a banger. Haha… Plus, my friend Rosa made the video, which is creepy as fuck. But yeah, [producer] Alex [Cowan] taught me how to use GarageBand, so this band is sort of directly responsible for my existence as a musician.

I’m super into hymns and super into acapellas. Tonstartssbandht is probably my favourite live band, but this song showcases its softer side. Plus, I don’t know why, [but] this video is super beautiful.

This video and song to me is sheer charisma. I don’t know why, but I can’t stop obsessing over it. I also really love Renaissance fairs. I’m always learning from bands like this what a live performance is really about.

K-pop is certainly trending, but I feel like a lot of the time the visuals are really great and the music is just sort of OK. But this song… I really fucking love this song… This is a fucking sensational hit. It evokes, like, futuristic Asian Ace of Base, and for some reason, this video is really emotional to me.

How to Dress Well “Suicide Dream 2”

I had the wonderful experience of touring with How to Dress Well this summer, and I feel like this song made me tear up every night. I had kind of “moved on” from my experimentation with R&B, but after this tour I got really re-inspired, went home, and immediately wrote [songs that] are, in my opinion, the best shit I’ve ever done. HTDW has been a really powerful influence on me musically.