Though the flamboyant 29-year-old artist is currently based in Berlin, Jimmy Edgar is probably best […] 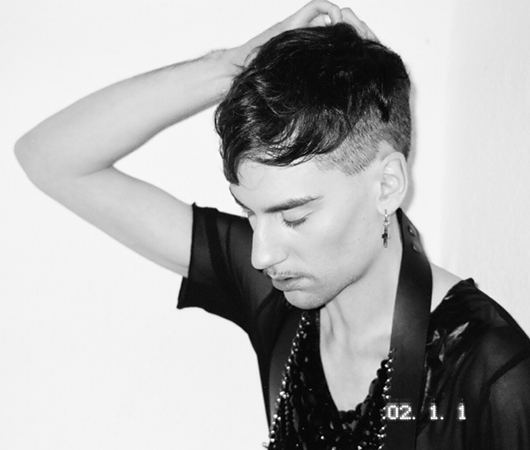 Though the flamboyant 29-year-old artist is currently based in Berlin, Jimmy Edgar is probably best […]

Though the flamboyant 29-year-old artist is currently based in Berlin, Jimmy Edgar is probably best known for his strong Detroit roots, which have been fully apparent in all of his work since Warp released his first record in 2004. Fast forward through eight years and two full-length albums, and not a whole lot has changed; Edgar’s recent LP for Hotflush, Majenta, reps the vintage vibes of stripped-down Motor City techno and electro as strongly as ever. We thought it’d be cool to find out exactly which classic cuts inspired his record’s era-specific sound.

What Edgar turned in to us is more or less a Who’s Who from the late-’80s/early-’90s Detroit music scene, with a few notable outsiders also thrown in the mix. The sizeable list is broken into two parts: one featuring five big old-school techno cuts and the other boasting a mix electro and funk records from that significant period in dance music, all of which is matched with interesting anecdotes and musings from the DJ/producer. It makes for a solid companion piece to Edgar’s new 11-track full-length, as more than a few direct parallels can be drawn between these timeless jams and the artist’s fresh material.

There’s no way I could remember the first time I heard this song. If I had to venture a guess, it was either from my mother’s record collection or on the radio, proper from the early ’80s. All of us in Detroit were up on this stuff one way or another. The name alone invokes some kind of cosmic reaction. This was probably the second or third record I bought as a DJ to play [out]. The first was Trax Records’ Adonis “No Way Back,” and looking back, I’m surprised the condition it was in; the drum-machine workout is stellar. We spent so long trying to figure out what drum machine he used… We didn’t think that he’d be using three or four different ones.

These were the days when electronic studios were around, so you will find many versions of this song. One way that you can tell how amazing a song is written is by listening to different produced versions, and they are all good. Kraftwerk was amazing at this, too; their songs were real songs and could be played live and recreated. Times have changed. I’m putting this song on this list because anyone that knows me knows that I love this song, and if you hear my single from two years ago, “Hot, Raw, Sex,” then it all makes sense. No shame, I’m inspired.

Mr. Fingers “Beyond the Clouds”

Larry Heard’s catalog is ultra to say the least. That bass sound. There’s nothing more that I want in my life than to one day have a studio and produce all my friends’ music like Trax did. They probably all got together, shared ideas, and created a genre; a pretty simple formula. Today, we have lost all communication with our peers. This next year, I’m going to give my all to bringing back that community feel of sharing ideas and revolutionizing music. It’s a big goal, but I think it could be really amazing. Sometimes, I’m not satisfied always doing everything creative alone.

I found this song way late, like maybe 10 years ago. I heard Derrick [May] drop it somewhere in Detroit. I actually asked him what it was because I was certain I knew all his music. That’s funny, but I also have that egotistical side of me that loves when people ask what I’m DJing and I can reply with, “Oh, that’s mine.” Derrick was the funkiest producer from Detroit in my opinion. He just has that personality. I love his music. The first time I met Derrick, he was drunk, and pretended his name was “Geraldo,” or something. The next time, he was picking my track for the first DEMF compilation. He said, “Jimmy, that white boy is baddd.” Bragging rights, I guess.

I can’t imagine not growing up in Detroit, I must say. I suppose we’re all biased in this way. I can’t imagine not being six years old, coming home from school, watching “The Scene,” and practicing my dance moves with my sister. We all hated the ’90s from 2000-2010, some people still aren’t getting it yet. Fucking hell, watch this video, and you will see why the ’90s were incredible. Of course, we’ll always look back 10 years and say, “Damn, what the fuck?” And 10 years ago, I was saying that about the ’90s, and so were all of you. Well, we’ve hit 12 years [since then], and I admit it: screw the ’80s, the ’90s were great.

Moreover though, retro is out. I’m on this future kick now. We can always look back and get inspiration, but it’s come full circle upon full circle in a bigger circle. I’m fully into creating something new these days, pulling out from the galaxy and looking amongst the changes in the world and consciousness to see what uniqueness it [all] has to offer.

This was one of the super-early records that I bought, too. Mr. De, who produced it, is an amazing guy and amazing musician. DJ Assault on the other hand, yeah, well… DJ Assault. He has a lisp, which is funny. Nah, he is a cool guy. Loves chicken and pussy, from what I know. Anyways, I remember playing this tune at Terror Town. It was a haunted house in Detroit, and I got hired at 15 to DJ inside the S&M room. Yes, so just to clarify: During Halloween, they would open an attraction where you walk through and, somewhere in the middle, I would be DJing a little club setup where dominatrix girls would whip you into submission. The funniest part is that it was in a children’s water park owned by some Italian mafia bullshit. After it closed, they would have leather parties and shows inside the park lobby, and I would play mostly booty music. One time I played “Come to Daddy,” and the doms really loved that song.

Aux 88 are some of the nicest guys I’ve ever met. Coincidentally, I met them at that same water park. Now that I recall, they did a few raves there. We ended up becoming friends. All I gotta say is, when middle-aged black men are befriending 16-year-old white boys, that is such a beautiful thing when you think about it. We spoke the language of music. I mean, let’s be real: If I was approaching 40 or whatever, I couldn’t imagine what I would have in common with a teenager that wasn’t a relative. Anyways, that’s real and honest.

I still see Keith from time to time. They still travel and stuff. Tommy will read this, too: Hey, I want those dance lessons! (He’s a well-known footworker.)

West Coast boogie and funk: These are the kind of records you could find about 10 years ago in the $1 bins. I used to search those bins for interesting stuff, that’s probably how I really got into underground funk. I loved Prince and stuff, but nothing ever did it for me. I started finding records like this and Change “Change of Heart,” which I bought because it had amazing artwork. I remember honestly not liking them when I first heard them. I just happened to sample them because they had nice kits, and I really started liking this kind of music again. I’m not a nostalgic person at all, but the feelings and emotion from these songs were real. Lyrics were terrible mostly, but the production and all else was dope.

I used to DJ this song way too much. Patrice Rushen has some of the best musicality, production, and vocals on anything I’ve ever heard. Her music is mostly why I started playing slap bass.

The “Astro Mix” is a good version of this song. I like how dub mixes were just that, turning the song into a dub version with space echoes and beat drops. I found two versions of this one time, years ago. I’ve also heard Dâm-Funk play this almost every time I’ve seen him. This song was very inspirational to me with the way the bass would slide. It made me realize how I have to treat every synth/instrument that I play as if it’s a member of my virtual band. Then I would assign an attitude to each member and create relationships between them, that’s how I created my songs for a long time. Most of the time, I had a bass player who was weird and liked to slide everything, he had an attitude and would fight with my virtual synth player. They wouldn’t let each other play at the same time. The drummer, though, he was always playing with the bass player. That was my pretend band.