Back in February of this year, we ventured into the Brooklyn studio of experimental house […] 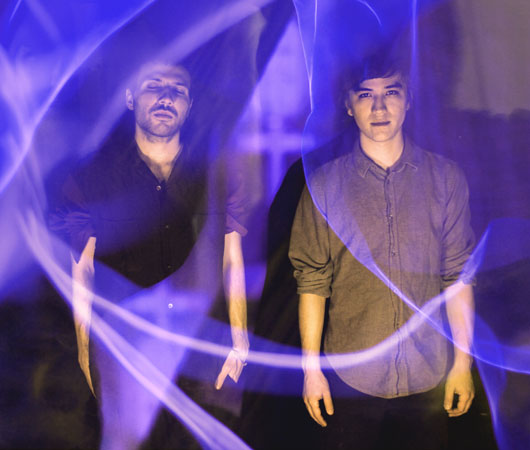 Back in February of this year, we ventured into the Brooklyn studio of experimental house […]

Back in February of this year, we ventured into the Brooklyn studio of experimental house duo Teengirl Fantasy to talk to producers Nick Weiss and Logan Takahashi about the kinds of synths, drum machines, and various effects processors that were used on their hitherto untitled second LP. We’ve since been enlightened to the particulars of that record, now called Tracer (out August 20 via R&S/True Panther), and have more recently indulged in its 10 tracks of wooshy dance and pop music. As it turns out, Weiss and Takahashi weren’t kidding when they explained how the ’90s-era Digital Revolution had a great effect on Tracer; you can hear it in the washes of crystalline synth pads, the terse and percussive drum programming, the vintage sound effects, and the liquid ambience inherent throughout. It’s influence is so strong, in fact, that we thought it necessary to get down to specifics, so we asked Teengirl Fantasy to send over five cuts from that time period that were reference points for the new album. Takahashi returned our request with a solid selection of tunes that any fan of early IDM and ’90s electronica would do well to peruse.

I was listening to the album Safety in Numbers a lot during the spring before we started recording, and I was definitely thinking about it as a sonic reference point to some of the ideas I was coming up with. [David Van Tiegem] does a really good job of creating a specific sound world, one that is really digital sounding and clear and contained. There is also something kind of demented about his musical sensibility that I really like—it’s this kind of absurd quality that’s at [odds] with the otherwise peaceful, new age-y sounds he’s using. This music actually sounds really insane the more you listen to it.

This past year and a half, I’ve dug a lot deeper into a lot of early-90’s/Warp-era/early IDM artists like Black Dog Productions, B12, Aphex Twin, Autechre, etc. Right now, this is some of my favorite type of music. The digital-era melodicism and musical complexity of these types of artists were huge points of inspiration for me when making Tracer. To me, this sound is really relevant right now, and I’m surprised that not more current producers are reaching back to this period.

When it comes to Art of Noise, “Moments in Love” gets the most shine, and deservedly so, since it is one of the most perfect tracks written, ever. “Camilla” is a slightly less-known track from them, but just as magical and beautiful. Anne Dudley’s synth work is so warm and simple yet full here, and is really complimented by Trevor Horn’s more tightly programmed drums. I like how Art of Noise kind of owns that Fairlight sound so well—it’s so recognizably theirs. They are the original masters of the choral pad.

I’d actually been into this track way before I knew who it was. When I was a little kid, I would obsessively watch the Beyond the Mind’s Eye videos that this music was written for, and I guess it ended up having a lasting effect. Jan Hammer used a lot of digital rackmount synths, most famously the Wavestation. Last spring, Nick [Weiss] purchased a Wavestation SR, which is a digital FM Vector synthesizer. A couple months before that, I’d picked up a Yamaha TG-33 in Berlin, another digital vector synth. These two synths generated a lot of the sounds that we used on Tracer.

Ken Ishii was one of the original artists on R&S’s roster in the ’90s, and he is one of my favorites. There’s an iciness and moodiness to his synths that is indebted to Detroit, yet his harmonic and composerly choices really sound so Japanese to me. I think he was way ahead of his time with the way he presented all these avant garde ideas in the guise of more straightforward techno. There is so much information in his tracks that I always hear something new every time I listen to him.