Holy Fuck: With Their New Record, the Toronto Four-Piece Walks the Tightrope Between Live Energy and Studio Perfectionism. 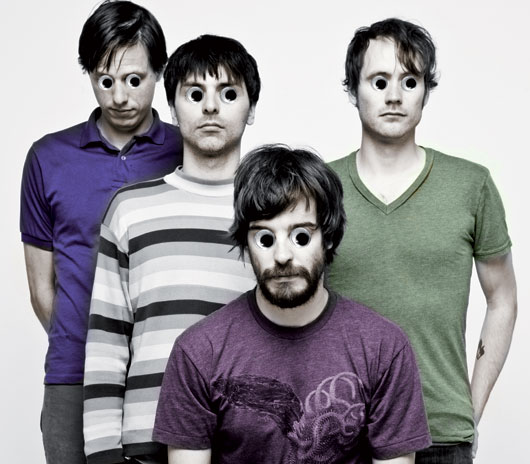 Holy Fuck: With Their New Record, the Toronto Four-Piece Walks the Tightrope Between Live Energy and Studio Perfectionism.

Holy Fuck has spent the last six years developing a sublime brand of post-post-rock that owes as much to classic Krautrock and guitar nerdery as it does minimal techno. The Toronto-based quartet, led by Brian Borcherdt and Graham Walsh, built their sound on thoughtful improvisation, a wide palette of found instruments, and an untouchable live show. Recording their third long-player, Latin, in a barn in rural Ontario, Holy Fuck managed to capture their live, skronky intensity while retaining their math-rocky attention to detail. We caught up with Walsh to get the lowdown on how he distilled the band’s inimitable vibe.

XLR8R: How did the barn have an affect on the recording process?
Graham Walsh:
We’re very drawn to rural environments. I find that it’s just more relaxing to get out of the city, where there’s a lot of energy going on. That can be good, too, and that’s where a lot of our friends are, but sometimes I like to lessen the distractions and come out into nature. For the barn, we just booked four- or five-day chunks here and there. We’d go to the grocery store and buy supplies and then just stay in this barn, and just totally immerse ourselves.

As a band, Holy Fuck is known for its intense live show. Do you consider that when you’re in the studio?
With Latin, we have more of our live energy than we do on our past record. We did things this time where we played everything live in the studio and tried to get a take out of it. There is definitely something to be said about a band playing all together at once. Generally, I find that the energy, the vibe, and the excitement in the group is much greater. That’s an optimal situation. With this record, we did have a solid drummer and bass player that played on all of the songs, whereas on previous records we had a rotating cast. That added a uniformity to the songs.

But you’re obviously not against overdubs.
That’s the thing, it’s a balance. We recorded everything all together, all four of us. Then we were bringing the tracks back to Toronto and adding little details, fine carvings. There are certain things on the record that we wanted to pay a lot of attention to in terms of keyboard parts. You need a lot of focus on your own to hone in on those things. We were trying to meld the best of both of those worlds where we were trying to lay down as much as we could live off the floor and then adding those details afterward.

What sort of set-ups did you use in your home studios?
Once Brian and I brought the bed tracks home, we were using our own Pro Tools LE systems, and running certain tracks through our pedal board set-ups. They contain various guitar EFX pedals (Boss, Moogerfooger, Frostwave, Lovetone, Diamond, DigiTech), and either a Mackie 1604 or an Alesis Multimix portable mixer for generating feedback loops, and overdriving to get a really awesome distortion.

Do you prefer to work with digital or analog gear?
There’s the whole Pro Tools-vs.-tape argument, and so far we’ve done everything with Pro Tools, which has become very invaluable to us. My experience with tape isn’t as extensive. My argument is that either one is a tool and it all depends on how you use it. You could hand somebody a tape machine and they could make a crappy-sounding record. You’re not automatically going to run your stuff through a tape machine and it will sound perfectly amazing. There are tons of great records made on Pro Tools and it’s amazing tool. You can track down the rabbit hole in Pro Tools, for sure, and that’s a negative side to it, and tape sounds good and there’s limitations to tape which are wonderful but it can also be a pain in the ass, too.

It seems like you’re looking for the right balance between live and studio as well as digital and analog.
I think that’s kind of a metaphor for how we create and make our art. It’s a giant balancing act, and an alchemy between certain elements. We’re combining certain things and seeing how they act and react together.

Latin is out now on Young Turks/XL.