Hyetal: A Bristol basshead uses Cocteau Twins to confront his dubstep-heavy past.

It’s easy to think of dubstep as its own fully evolved form, as though the […] 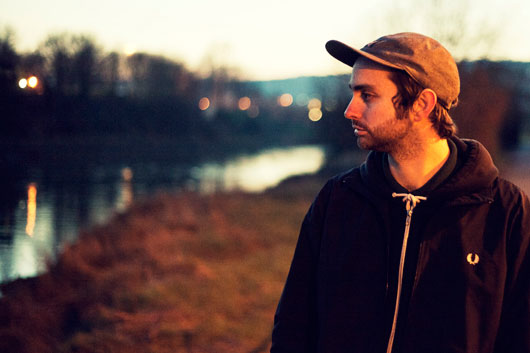 Hyetal: A Bristol basshead uses Cocteau Twins to confront his dubstep-heavy past.

It’s easy to think of dubstep as its own fully evolved form, as though the […]

It’s easy to think of dubstep as its own fully evolved form, as though the off-kilter child of drum & bass and 2-step garage was born in one epic bass drop, written in Platonic form as an unchanging genre forever. But like any well-defined and exciting sub-genre, dubstep now exists in many forms apart from standard bass wobble orthodoxy, be it super-producer’s album tracks for artists as mainstream as Rihanna or newer, more experimental sounds that simply bare its traces. Count Bristol resident David Corney (a.k.a. Hyetal) among that last group, as a young producer who came up in the midst of the nascent dubstep scene, and has evolved from releasing unique genre singles to a fully realized artist album, Broadcast. He seemingly aims to define a new space in which John Carpenter scores his films with rattletrap synthesizers and dim, throbbing percussion.

Corney’s musical evolution started out in Southampton. He began exploring rock music, but when hip-hop took hold of him, it revealed a new means of production. “I bought an Akai MPC,” he explains. “I really studied it and tried to do [hip-hop production] as authentically as I could. I’d get original pressings of breaks and would then sample straight from the turntable into the MPC.”

While sampling is still a component of his work, it wasn’t long before Corney was emulating DJ Premier and Pete Rock, as he was swayed by the influence of the very material he ended up crate-digging: “I started getting into a load of early electronic music just from buying the records to sample—Kraftwerk, Tangerine Dream, especially soundtrack stuff—analog sounds I wanted to have a crack at. [It was a] massively influential genre of music, really.”

In the midst of this, a move to Bristol to study music and film at university (“I was a mature student,” he says with an easy laugh) put him into one of the UK’s most influential musical hotspots. “The music scene here is amazing really: hip-hop was happening and some early drum & bass simultaneously. The whole dubstep scene, that’s a lot of people’s roots, in jungle and drum & bass,” he offers. Though he heard various dance genres in the Bristol clubs, Corney found the rough-and-tumble energy of dubstep irresistible. “The other music was fun and inspiring in that it was my first experience of dance music clubs,” he admits, “but I didn’t listen to the records at home in the way I did with dubstep… It was tangible here, people working in record shops and playing in clubs, and all were people who were easily reached.” With that bit of production experience already under his belt, Corney became Hyetal (which means “of or pertaining to rainfall”) and dove headfirst into dubstep.

Early singles like “Gold or Soul,” built on a solid foundation of low-end thump and perfectly stepped percussion, hypnotized the punters with classic club-friendly peaks and valleys, allowing him to sneak in little personal touches like micro-samples of soulful house vocalists and interstitial videogame-style blips. “The Last Time We Spoke” incorporated the hallmark wobbly bass stabs and lazer-etched percussion of dubstep, but eased up the BPM to near-techno territory, and the strobed synths piled on later hinted at full-on acid-house abandon. DJ gigs followed, escalating from sporadic to regular, and though Corney initially shied away from incorporating too many Hyetal tracks, his sets showed the range of his ear—and allowed him to avoid a day job so that he could DJ and produce full-time.

These tipped early singles and DJ exposure led to collaborations in the tight-knit Bristol dubstep scene, leading to split tunes with producers like Shortstuff and Peverelist, and a regular side-project with Julio Bashmore called Velour. “Peverelist was actually quite an influence on me in the scene,” he explains. “[I] always had a lot of respect for his music. Then with Velour, Julio heard a magazine mix and hit me up. Bristol’s a small place, so it’s easy to link up.”

This kind of collaborative scene seems to rise up in Bristol once a decade or so—recall the early Wild Bunch years of trip-hop, when groups like Massive Attack and Portishead (whom Corney cites as a major influence as well) shared a free flow of ideas and members. But then as now, a scene can harden into a set of rules, especially when one week’s singles sometimes seem to only echo and restate the previous week’s.

Rather than end up on a treadmill of churning out singles with just minor variations every season, Corney stepped back to some of his original influences. “I’ve always been a fan of alternative pop things like The Cure and Depeche Mode,” he says, “and when I started hearing those sounds reinterpreted by current artists, it reminded me and I went back to the old 4AD stuff like Cocteau Twins. I started listening to early house music as well, so it was kind of a bunch of different influences going on at once.”

Drawing on these sounds from completely outside the dubstep world, he made “Phoenix.” It’s a classic push-pull slice of electronics, with hazy tunings and a space-age feel that calls back to the forward-thinking heyday of Orbital, and a strong, hummable melody throughout. “I stopped worrying about trying to fit in, really,” he explains, emphatically. “I realized all my favorite music didn’t have any regard for rules, and it was just more about the individual people finding their own sound and going with that. So I kind of stopped paying attention to what other people were doing and [started] doing my own weird music… People really picked up on it, and that was by far the most selfish production I had ever done, but it worked and gave me confidence to go off on that aspect.”

That disregard for rules permeates Hyetal’s first album, the recently released Broadcast. The opener, “Ritual,” features massive, ominous washes drifting in ambient space, recalling the soundtrack work of Vangelis and Tangerine Dream. Guest Alison Garner adds wistful, whispery vocals to “Diamond Islands” and closer “Black Black Black.” The tempo speeds up in the midsection, with the defiantly artificial percussion of “Beach Scene” recalling early electronic pop like New Order. The pulsating synths of “The Chase” provide a mid-album return to future-noir landscape, and then “Searchlight” uncovers a warehouse in which house of both the Chicago and glitch flavors are reunited by a traditional song structure.

Toward the end of the album, minor-key midtempo pieces dominate, but look for those little auteur flourishes: an intentionally missed beat here, a swish of static there. Broadcast is crafted, but not rigidly controlled, moving intentionally from track to track and style to style, and fully embracing the format with shorter tracks and a logical super-structure. “It’s very much something I wrote intentionally as an album,” says Corney. “That’s the one thing I don’t really like about dance music albums: Quite often they can be a collection with three tunes that would work as 12, and are brilliant, and the rest are filler. The most prominent things when I was young were rock and hip-hop, and both are very album-based, so I’ve always had love for that and wanted to do something that was coherent and worked as a whole.”

Broadcast is out now on Black Acre.