“I Don’t Think We’ll Ever Explicitly Make Jungle” – Raime Talks Influences, the Future, and Food at the Mountain Oasis Festival 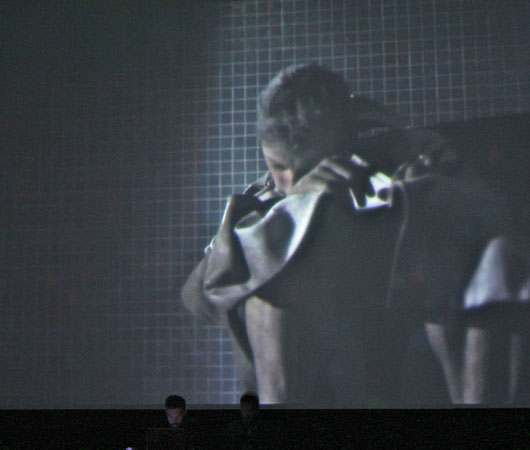 “I Don’t Think We’ll Ever Explicitly Make Jungle” – Raime Talks Influences, the Future, and Food at the Mountain Oasis Festival

XLR8R traveled to Asheville, North Carolina last weekend to take in Mountain Oasis, the city’s new electronic festival. (You can find our review of the proceedings here.) Taking some time away from the festival’s stacked three-day lineup, we sat down for a chat with London duo Raime (a.k.a. Tom Halstead and Joe Andrews), who touched on topics like the influence of jungle on the group’s music and psychedelic pizza parlors.

XLR8R: This is your first time in the South. How do you like it so far?
Joe Andrews: Awesome, man. Obviously, we’re here at the right time. It’s pretty crazy out there, a lot of interesting people. It’s not what we were expecting, that’s for sure.

We’ve been pretty impressed with the quality of the food here, which goes well beyond Southern cooking. Have you guys been eating some good meals?
Joe: We got here last night and we went to… what was it called? Mellow Mushroom for pizza. The pizza’s okay, but the place is pretty hilarious.

Tom Halstead: They’ve got like a psychedelic Ronald McDonald outside.

JA: We had a pretty amazing time.

TH: You don’t go there for the food, I don’t think.

Your FACT mix from a few years ago seemed to anticipate the drum & bass revival that’s happening now. Will those influences make their way into your music as Raime, or do you reserve that for DJing?
JA: I don’t think we’ll ever explicitly make jungle. We’ve got one or two small projects happening that might mean we get closer to it, but I don’t think Raime will ever produce jungle. But who knows? It’s an influence that’s been there for a long time. Atmospherically, I think it’s quite an integral influence actually. It’s always there in the music. There are lots of other integral influences that make up the melting pot, but it’s always there in some shape or form.

What shows are you hoping to see tonight, if you have time before your early flight?
JA: Godspeed You! Black Emperor. We’re rushing over after we finish, we’re just gonna leg it over there. I think the last time I saw them was 10 years ago. Their last record was great.

Did you have a chance to see anything last night or did you get in too late?
JA: We just went to Mellow Mushroom. What else do you need?

Are you playing any other shows before going back to London?
JA: We’ve got two more shows coming up. We’ve got one in Philadelphia, at the chapel there, and then on Halloween at Output in New York with Vatican Shadow and Silent Servant.

And you just played a few shows on the West Coast, including one put on by Mount Analog, right?
JA: Yeah, those guys are great, man. It’s one of those times when you walk into a record shop and your taste is totally catered to in every area. It’s also filled with other bits and bobs from books, fanzines. They’re really doing a service I think. We played downtown, in this gallery space that they sometimes use for events. I can’t remember the name of the space, but it was near Little Tokyo.

Mexico City also has some amazing venues. Where did you play for MUTEK.MX?
JA: It was the theater, do you know that one? The one with all the stalls going up quite high. [Editor’s Note: It was the Teatro de la Ciudad.] It was pretty incredible. We played with Matmos, which was pretty cool. Their show was brilliant.

The food there is unbelievable, too. The micheladas are wild.
JA: Mezcal, too! We’d never done that. That was interesting.