In this week’s edition of Inbox, Milwaukee-raised experimental electronic quintet Cougar steps into our parlor […] 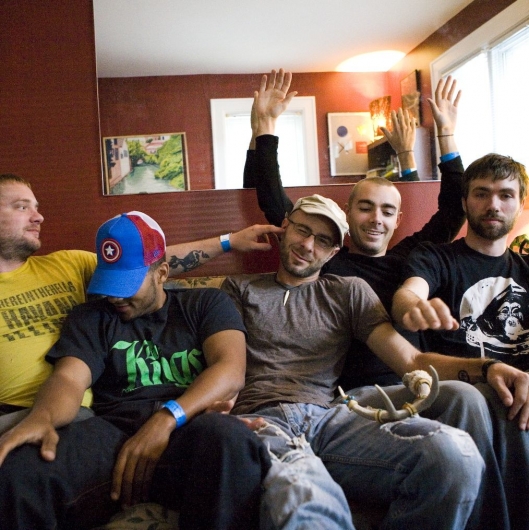 In this week’s edition of Inbox, Milwaukee-raised experimental electronic quintet Cougar steps into our parlor […]

XLR8R: What are you listening to right now?
Aaron Sleator: We’re sitting on the stoop outside David’s house, listening to people chastise their dogs in the park.

What’s the weirdest story you have ever heard about yourself?
David Henzie-Skogen: We played a show and some girl thought our singer was sick. She said she thought we played quite well, considering.

In what band did you want to be when you were 15?
DHS: Eddie Palmieri’s band.
AS: Lynyrd Skynyrd.

Worst live show experience?
DHS: An undisclosed location in England, which turned out to be essentially a high school dance. There were 15-year-olds slow dancing in the front row and making out during the acoustic numbers.

Favorite city in which to play?
DHS: Ljubljana, Slovenia sticks out in recent memory. It was an old converted film house. The stage was massive, the vibe was warm (though the toilets were cold), and the audience was very receptive.

What is one thing you couldn’t live without (excluding the obvious essential, i.e. air, water, etc.)?
DHS: Practice pad.
AS: Coffee.

What is your favorite item of clothing?
DHS: Blue Hoodie.
AS: Yellow Hoodie.

If you could reduce your music to a single word, what would it be?
DHS: Oops.
AS: Midwest.

If you could come back as any animal, which would you choose?
AS/DHS: Not even going to justify with the obvious.

For what did you always get in trouble for when you were little?
DHS: Muddying up high-tops.
AS: Repeating things.

With which other artist would you most like to work with next?
AS: David Henzie-Skogen.
DHS: Aaron Sleator.

Complete this sentence: In the future…
DHS: Getting sick in America will probably still be God’s punishment for being poor.
AS: One word: brain implants.

Stupidest thing you’ve done in the last 12 months?
AS: Accidentally burning “COUGAR” into the university’s laser cutter while making a stenciled design for poster screen prints.