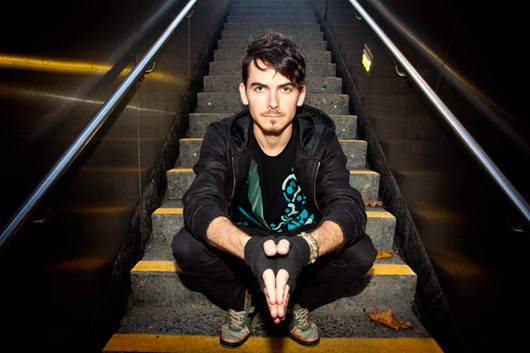 XLR8R’s Inbox brings it home this week with San Francisco-based creative bass producer and Ancestor Media founder, Brendan Angelides (a.k.a. Eskmo). Angelides takes us to the top of his playlist, obsesses over Les Claypool, eats his way through San Francisco, and receives an odd conical gift from fans. Look for Eskmo’s split 12-inch with Eprom, out in early 2010 on Warp.

XLR8R: What’s the weirdest story you have ever heard about yourself?
Brendan Angelides: Having someone personally tell me about an amazing set I did at an event I never played at.

What are the top three most played songs on your iTunes?
The National “Brainy”
Mew “Why Are You Looking Grave?”
Aphex Twin “Blue Calx”

What band did you want to be in when you were 15?
Primus. I used to be obsessed with Les Claypool.

What is the strangest gift you’ve ever received from a fan?
A pyramid cone made out of a hard resin, iron, and copper.

Of the cities you’ve visited, which has been the most unexpectedly enjoyable?
Edinburgh, Scotland.

What is your favorite studio toy?
A Detective Dunny, given to me by a sweet lady.

What is your favorite item of clothing?
Creative Rec shoes. I’m a big fan.

If you could have any superhero power, what would it be?
I can already fly, so the power to plant seeds anywhere, everywhere, however.

What color is your music?
I try to hit all the colors for different reasons. Some songs definitely have a specific tone in mind, while others blend a few of them. Better that way (in my own opinion).

For what sorts of things did you always get in trouble when you were little?
Drawing in class; not paying attention; jumping off the swings; sneaking in extra minutes of Nintendo at home.

If someone were to translate your most recent album into a painting, would it fall most closely under cubism, surrealism, impressionism, expressionism, or realism?
Surrealism and Expressionism combined.

What was the last movie you saw?
Goodbye Solo. Great flick!

Complete this sentence: In the future…
There will be holographic movie theaters.

Best decision you’ve made in the last year?
I couldn’t even say honestly. It’s all good.

What’s next?
My first single on Warp is coming out in early 2010, with my friend Swan doing vocals. On the A side is my good friend EPROM. Very soon a new mix of mine—I usually do one a year—is being featured on Flying Lotus’ Brainfeeder site. [I’m] finishing up some music with Amon Tobin. Some more tour dates are being planned in the states and Europe. [I’m] working on an album. More unnamed remixes and collabs coming along the way. Meet Tom Waits, play in Japan, fall in love all over again.