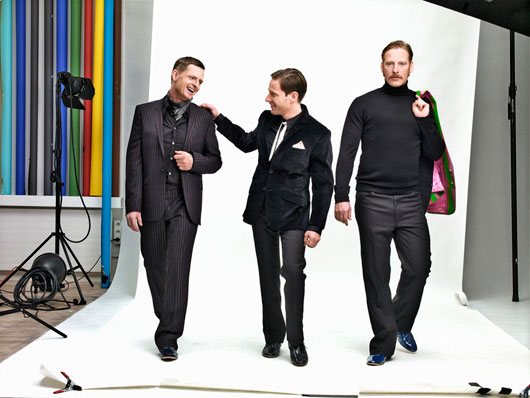 This week Inbox hails President Bongo (a.k.a. Stephan Stephensen) of effervescent Icelandic techno collective GusGus. The affable President takes us through a couple of horrific minutes of confusion onstage at The Fillmore, the bliss of Icelandic swimming pools, sweet thievery for Mom, and a very detailed (and oddly upbeat) account of losing an appendage. GusGus’s latest full-length album, 24/7, is out now on Kompakt.

What’s the weirdest story you have ever heard about yourself?
When I was 13, I was chasing this girl on icy water—it had been kind of hot the day before, so the ice had cracked a little bit, leaving the surface uneven and with some ice sticking out, like razor-sharp knives. I fell and cut off one of my fingers. Luckily, I had woolen gloves on, and that kept the finger. When the blood colored the gloves, the girl laughed and screamed, “He’s got shit on his gloves!” I looked at my hand, and truly the color of the white, woolen glove was like shit. That was my girlfriend. ?

What band did you want to be in when you were 15?
I cannot remember. I don’t think I was thinking about that. Girls were more important. ?

Worst live show experience?
For many years it was a performance at The Fillmore in San Francisco. Due to some major bass waves on stage, the Midi Tmepiece was resetting itself without any one asking for it. It took two long minutes to figure out what was going on; it felt like days. Recently we had an even more horrible experience when our bass modular synth started playing everything out of tune. It took 15 minutes to fix—those felt like years!

Favorite city in which to play?
No favorite city. They are many, many! ?

Favorite studio toy?
My brain.
?
What is one thing you couldn’t live without (excluding the obvious essential, i.e. air, water, etc.)?
The Icelandic swimming pools. ?

What is your favorite item of clothing?
My jbs underwear. ?

If you could reduce your music to a single word, what would it be?
Techno. ?

What is the most Icelandic thing about you?
My self-confidence. ?

What did you always get in trouble for when you were little?
For stealing roses for my mom. ?

Which other artist would you most like to work with next?
I don’t know… Good question. ?

What’s the last thing you read?
The Girl Who Played with Fire by Stieg Larsson.

Complete this sentence: In the future….
…drop your expectations. ?

Stupidest thing you’ve done in the last 12 months?
I don’t know really, and that’s pretty stupid.
?
What’s next?
Another album, and hopefully a US tour.