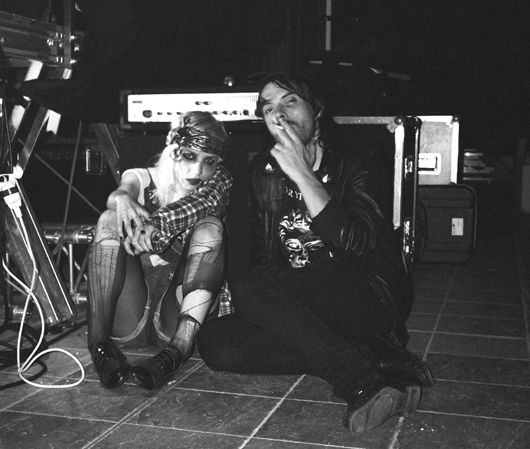 This week Inbox enters the realm of wild French electro-grunge duo Kap Bambino. The gypsy that is leading lady Caroline Martial woos us with Guns N’ Roses, eats spiders (supposedly), rages for the benefit of church-going families, knocks back soup, and loses her mind on stage. Kap Bambino’s Blacklist is out now on Because Music.

XLR8R: If you wanted to seduce someone in three songs or less, which three
would you choose?

What’s the weirdest story you have ever heard about yourself?

My mum says I have eaten a spider. I don’t believe her.

What band did you want to be in when you were 15?

What has been your weirdest show moment so far?

Playing for a rubbish art festival in France, in a old church in front of
families.

What is your drink of choice?

Favorite phrase to live by?

A bowler hat, a leather jacket, a pair of boots: Which comes off first
during a show?

What is your favorite French word?

Which would be the most exciting thing to see at night: a shooting
star, a 24-hour Starbucks, a street performer posing as a tinman, or dead lizards?

Dead Lazers on ketamine in a Starbucks coffee [shop], performing between two
fridges and shooting a pink donut.

What did you always get in trouble for when you were little?

If you had to cast any actress to play you in a movie, which would you
choose?

What’s the last book you read?

Hamsters are gonna be free.