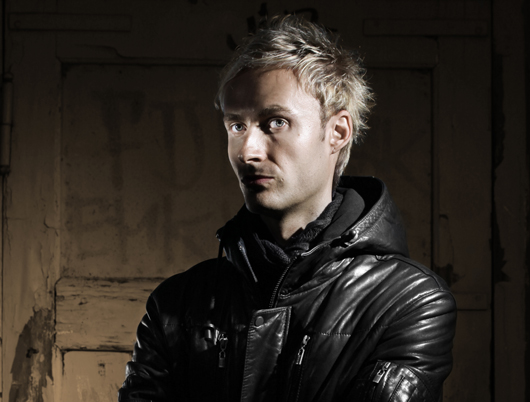 Check in with Inbox as we pick the brain of Berlin-based experimental dubstep maestro Robert Koch (a.k.a. Robot Koch). The talented producer (and founder of Jahcoozi) selects some choice karaoke tunes, finesses his way out of sticky on-stage situations, bogarts musical instruments from family members, and juggles a mind-boggling assortment of projects. Robot Koch’s debut full-length, Death Star Droid, is out now on his own label, Robots Don’t Sleep.

XLR8R: Which track has received the most plays in your iTunes library?

What’s the greatest number of people you’ve sat with in a standard-size Jacuzzi?

Only four people. It was with the two other Jahcoozi guys and a strange old man in a weird hotel in Romania.

What is your go-to karaoke song?

Haha, embarrassingly enough, it’s “Africa” by Toto. Or “The Heat is On” by Glenn Frey.

I was booked to play with Jahcoozi at some big show in an old theater with live TV and radio broadcast. During soundcheck everything was fine, but someone from the stage crew must have disconnected the power of my soundcard. When the host announced the band, I realized that my laptop didn’t recognize it. This was like five seconds before we were supposed to start, and somehow still figured it all out at the last second. It was scary.

My old Bontempi keyboard, which was originally my sister’s. She lost interest in it, so I played with it since I was 12.

What is one thing you couldn’t live without (excluding the obvious essential, i.e. air, water, etc.)?

Music. Also too obvious? I guess silence is vital too.

What’s the weirdest thing you’ve purchased at a thrift store?

This yellow toy creature that sits on top of my studio monitors. It’s watching me right now.

If you could reduce your music to a single word, what would it be?

If you could re-score any existing movie, which would you choose?

What’s the strangest mash-up combo you’ve ever heard (or created)?

I heard that there is a band playing DJ Shadow songs from Entroducing live with acoustic instruments. I’ve never heard them, but I like the idea.

If you could only display one color of light to during your set, which would you choose?

I’d go for no light if I had the choice.

I gotta trust my intuition more.

Saying “yes” to a lot of things that my intuition told me to say “no” to.

The new Jahcoozi album is gonna drop on BPitch Control next year. I’ve got a new Robot Koch EP coming out soon as well, including remixes and new material. I’m making beats for some other people’s records, making new remixes, and will produce an album with Grace, the singer who was featured on The Doors cover on Death Star Droid. Plus, I’ll play shows in the U.S., Japan, Europe, and Africa. I’ve already started working on an album in Nairobi last month that will feature Jahcoozi, Gebrüder Teichmann, and Modeselektor, all teaming up with Kenyan artists. World music 2.0.