In this round of Inbox, XLR8R is straight chillin’ with legendary Oakland hip-hop foursome Souls […] 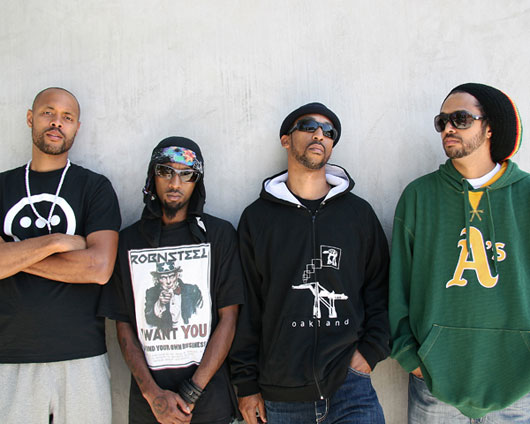 In this round of Inbox, XLR8R is straight chillin’ with legendary Oakland hip-hop foursome Souls […]

In this round of Inbox, XLR8R is straight chillin’ with legendary Oakland hip-hop foursome Souls of Mischief. Members A-Plus, Opio, Phesto, and Tajai take turns charming us with their choice of potty reads and a behind-the-scenes look at tour hijinks and international groupie love. The groups’s long-awaited fifth full-length album, Montezuma’s Revenge, is out now on Hieroglyphics Imperium.

XLR8R: What was the last song you had stuck in your head?
Tajai: “Planes, Trains, and Automobiles” by Shady Nate.

What’s the weirdest story you have ever heard about yourself?
Tajai: That I jumped fully clothed into a hotel fountain. It’s true—I had just forgotten about it.

If you lost a bet and were consequently required to tattoo a line from any of your lyrics on your arm, which would you choose?
Tajai: “Pay Due!”

What has been your craziest fan moment so far?
A-Plus: My craziest fan moment probably [happened] when I was abroad. There was this girl following me around. One time, when I went back to my hotel, she was sitting in front with the same clothes she had on the night before. I started talking to her, but there was a language barrier. [As] we were talking I noticed she had some shit on her shirt, and I was like, “Oh shit, what’s that?” She said sorry and left. Later, I [asked] my people about what happened, and Domino, he was like, “Oh yeah, she was in my hotel last night.” She had cum on her chest!

Any especially juicy tour stories?
A-Plus: I have a few. The Cali Comm tour with The Pharcyde, Planet Asia, Rasco, KutMasta Kurt, and a few other people (including Souls Of Mischief): That was the craziest tour I’ve ever been on in my whole life. I remember one of those guys had a trash bag full of prophylactics. By the end of the tour, the whole bag was empty. We had our Raiders colors on and the buses were crazy. The Souls bus was the calm bus.

What is your most unusual studio toy?
A-Plus: Marijuana would have to be it. Certainly nothing technical [that is] weird. Everything that’s technical that I use is pretty standard. I don’t have any sort of secret set-up in the studio.

What is one thing you couldn’t live without (excluding the obvious essential, i.e. air, water, etc.)?
A-Plus: Music.

If you could describe your music using any nonsensical adjective (i.e. serifractory, jolinuous, freg), what would it be?
Opio: Non-McDonaldized.

What was the last piece of good advice you received?
Opio: “It takes courage to be in love.”

What kind of mischief got you into trouble when you were little?
Opio: Calling 976-SEXX with my homies on a three-way call. We kept hanging up in the middle, laughing, and calling back to listen longer. Mom flipped out when she saw the phone bill.

Which other artist would you most like to work with next?
Opio: Black Milk, Pete Rock, DJ Quik, Busta Rhymes, Kurupt, the list goes on and on…

What book are you reading right now?
Tajai: The Art of Worldly Wisdom by Baltasar Gracián—only on the toilet though.

What’s happening from ’10 ’til infinity?
Phesto: More of the same: studying music, putting out records. Fine-tuning. Pushing the boundaries in hip-hop and music in general. Life!