This time around, Inbox chews the fat with French electro-house DJ and producer, Pascal Arbez […] 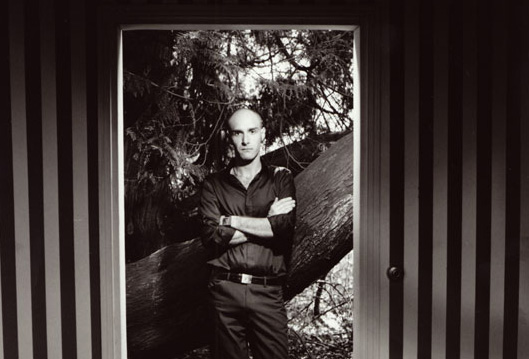 This time around, Inbox chews the fat with French electro-house DJ and producer, Pascal Arbez […]

This time around, Inbox chews the fat with French electro-house DJ and producer, Pascal Arbez (a.k.a Vitalic). The curious Frenchman ponders the power of the rumor mill, envisions a flash-mob mini-rave, remembers gardening accidents, and anticipates a boatload of touring. Vitalic’s latest full-length, Flashmob, is out now on Different.

XLR8R: What are you listening to right now?
Pascal Arbez: Nothing. I just worked on a remix, and my ears are a bit tired, so there is no music around.

What’s the weirdest story you have ever heard about yourself?
Some people said they saw my tour manager and me at the Tribeca Grand Hotel, drunk, dancing, and shouting along to “Gimme a Man” by Abba after the party, [while] the hotel [staff] was cleaning the place. All of a sudden, some friends in Spain told me they heard that story! It was true, yes, but it’s crazy how stories can spread so quickly, even to another continent. Also, we thought there were no witnesses.

What band did you want to be in when you were 15?
I wanted to be one of those “new beat” bands, or Jean-Michel Jarre, maybe. Later, Iggy Pop.

Worst live show experience?
There are many of them. I suppose that the Creamfields Poland festival last year was a nightmare: a big storm destroyed the main stage. Then water flooded everything and only two 4×4 cars could reach it. Of course, 2,000 people came instead of 10,000.

Favorite city to play in?
Barcelona. It is a very nice, pleasant place. They are real party animals, and you have the sun, the wine, the good food… Many musicians love Barcelona.

Favorite studio toy?
At the moment it is the Elektron Drum Machine—a Swedish company. I also love Predator, a soft of Rob Papen (Swedish too). Now I’m looking for a MemoryMoog. I’m sure it’s gonna be my new favorite.

What is one thing you couldn’t live without (excluding the obvious essentials, i.e. air, water, etc.)?
I don’t know. I can adapt, but I suppose that no computers or mobile phones would be a terrible step back.

What is your favorite item of clothing?
It is an orange zip sweatshirt from Paul Smith. I wear it very often, and I suppose I’ll have to get another one just like it soon.

If you could reduce your music to a single word, what would it be?
Epic. Not all my tracks are epic, of course, but I like high-pitched melodies and female voices, too.

Have you ever participated in a flash mob?
No, never. In Dijon, were I live, there are no flash mobs because it is a small city. I’ve seen most of them on TV or on the internet. In the beginning, with my record company, we thought about organizing some, but I thought it would be a bit too obvious; perceived as pure marketing. It would be fun to make a mini-rave, though.

What did you always get in trouble for when you were little?
For bad marks. My parents were angry at me because, until I was 17, I was a very bad pupil. That changed after I became interested in what I was studying.

Which other artist would you most like to work with next?
I am in touch with Jean Michel Jarre, and [we met] in December to make some music. I would also like to work with the vocalist for the Shit Disco band.

What’s the last thing you read?
Love Lasts Only Two Years, by Frederic Begbeder (French). It says at the end that you know when you love someone if you are able to be bored with that person, not when you have passionate feelings—useful and funny book.

Complete this sentence: In the future…
It will be forbidden to smoke anywhere, to have parties after 11 p.m., to drink after 10 p.m. I think the future will be a bad time for parties.

Stupidest thing you’ve done in the last 12 months?
I cut my right foot with the electric grass cutter as I was taking care of my small garden. Now it’s better, but the right foot was quite destroyed. Someone takes care of the garden now.