Just in time for the release of a new LP, XLR8R catches up with the elusive artist. 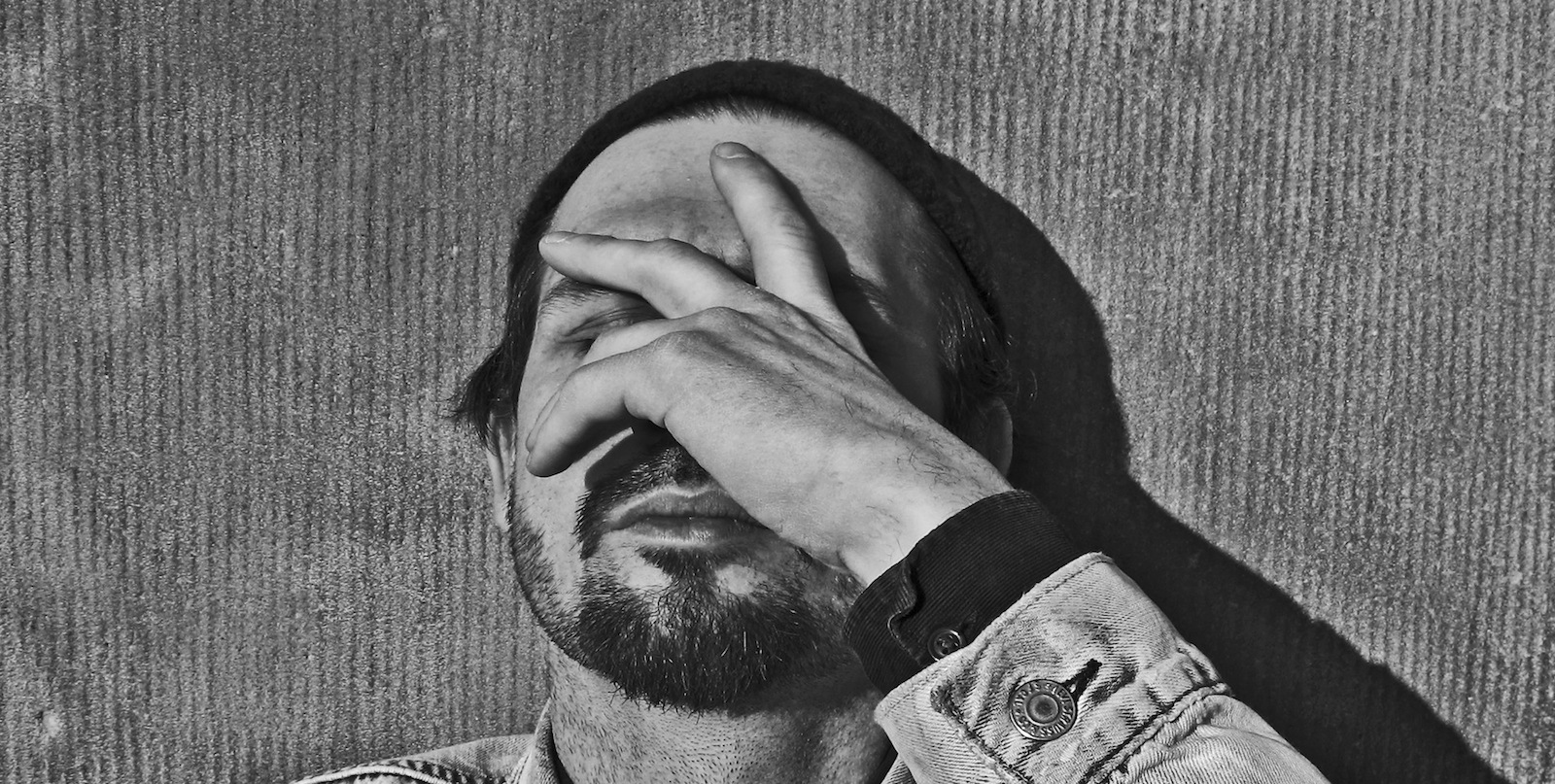 Just in time for the release of a new LP, XLR8R catches up with the elusive artist.

As with John Talabot, Redshape and Ten Walls before him, the identity of the anonymous producer Man Power has been electronic music’s favourite guessing game lately. Names such as Talabot, Michael Mayer and Tim Sweeney have been thrown around as possible crafters of the textured, genre-straddling house and techno of his recent EPs for Correspondant, Hivern, and most recently New York’s Throne of Blood. The producer in question hasn’t revealed his identity as yet, so it’s something of a surprise when I dial him up for what I assume will be a sound-only Skype call and am cheerily greeted by a man in his 30s in a blue denim shirt and wooly hat, his grinning face very much on camera and unobscured by shadow, mask, or gigantic ornamental feather.

His face (and his jovial Newcastle accent for that matter) is naggingly familiar. I mention this during a later exchange of messages and say I think I must have seen him play at some point. “Maybe,” he replies, before adding with a certain glee, “or maybe we’ve even met…” Though I (maddeningly) can’t place him exactly, I can put to bed any lingering Talabot/Mayer/Sweeney rumors, unless any of those guys has invested in prosthetics and accent lessons lately. When pressed, he says he’d prefer to wait until his self-titled album comes out (today, May 25, as it happens, so hopefully I’ll have been put out of my misery by the time you read this) before he absolutely confirms who he is, though he admits he has generally been a lot less guarded about it in recent weeks.

“[My anonymity] wasn’t intended as a gimmick, but I’d be full of shit if I pretended it hadn’t ended up helping me get noticed.”

“The guesswork is a lot more interesting than the truth I’m afraid,” he laughs. “Being anonymous started as a necessary evil, simply because before Man Power I did a project with two friends, which is still a going concern but has been on the back-burner lately. We had built up a network of bookers, and when I found myself in the position of wanting to do something solo I wanted to avoid it being lumped in with that project, because I thought that bookers would look at the situation and say, ‘we can book these three guys and pay three sets of expenses, or we can just book this one guy and it’ll be the same thing’. So I felt like I’d be stabbing the other guys in the back if I didn’t keep it a secret. Also that project is a lot more Balearic/disco-oriented whereas with Man Power I wanted to explore either odder or tougher sounds, so I decided to take who I was out of the equation and work with new labels and new bookers in a totally new place. It wasn’t intended as a gimmick, but I’d be full of shit if I pretended it hadn’t ended up helping me get noticed.”

The “new place” Man Power refers to is Berlin, where he has been based since late last year. It was “moronic” to move there in the grip of winter, he laughs ruefully. I say I think most of his music feels like a warm-weather thing, and he agrees. “I seem to play in a lot of really hot countries, so all winter I’d be coming back from Israel or L.A .or Mexico or wherever wearing a little jacket and just be weeping on the U-Bahn ride home.” He’s been DJing “for about 20 years,” and before his move to Berlin was based in his hometown of Newcastle in the north of England, where he and his two friends have enjoyed “as much success as we were looking for” with their group project.

So how did a member of a (self-described) “very niche” Balearic/disco project in the north of England end up casually flicking out his first two solo EPs on two of Europe’s most respected labels and building up a fearsome head of creative and critical steam from there? Simply by aiming high, it turns out. “Without wanting to say that I’m in a position to be doling out advice, if anyone asked me for one tip I’d say to them to start off at the top of what you want do and work back from there. I just really liked what Jennifer (Cardini) was doing with Correspondant and what Talabot was doing with Hivern, so I got in touch with them. They liked what I sent them, we got to know each other, and it all happened from there.”

Man Power talks in quite touching terms about Talabot and in particular about Cardini, label head of Correspondant, which put out his Kiloton EP this time last year and is now releasing his album. “Having Jennifer as a sounding board has been totally vital to the album coming out the way it has. She would constantly tell me to tighten this or that up, to not repeat myself and so forth, and there’s no way it would sound the way it does without that. I sort of hesitate to use the word ‘mentor’ but really it’s totally justified, I owe her a lot. She’s a great person who has a very selfless ambition to give exposure to the music that she really loves.”

The breadth of styles and consistency of quality in Man Power’s records to date are one of their most obvious and notable characteristics. He loosely defines the sounds he’s looked to create for Correspondant and Hivern as “a tougher, slower techno sound” with the former and “more spacey weirdo multi-influence stuff” with the latter, while his Throne of Blood EP hits on slightly darker textures. The album, meanwhile, is a work that expertly weaves together too many influences and inspirations to name, but that has an overall sunny glow and lightness of touch that should ensure his days of shivering on the U-bahn after gigs in hot countries are far from over.

“I grew up with my grandparents,” he explains, “but still saw my parents, so I had more than one set of influences. One set of grandparents would be listening to Bing Crosby, then the other set Nana Mouskouri and Ray Charles. My dad was into blues and Americana and my mum was into acid house, so it just kept my ear open a bit more I suppose. Even when I was going out all the time I was never a house kid or a techno kid; you’d be just as likely to find me in a rock club or a commercial club or whatever. I just loved music full-stop I suppose.”

Man Power’s description of the experience of making his album (“like doing a jigsaw puzzle, in the dark, but you have to cut the pieces yourself”) fits well with the image of a producer toiling to assimilate this lifelong cascade of influences, though the clarity and cohesiveness of the finished work suggests a knack for self-deprecation, extremely hard work, or both. The warm, propulsive house of “Forget To Remember,” “Tofu ist der Teufel”‘s charisma-soaked blend of trumpet and clicky, precision-aimed drums, and “TEN”‘s beautiful, sun-dappled guitars, are among the first-listen standouts. Really, though, Man Power is an “album” in the truest sense: a full-length that rewards repeated, concentrated immersion from beginning to end. Laurie Anderson, Steve Reich and Tangerine Dream are mentioned as particular influences, with Anderson’s 1982 debut LP Big Science clearly a particular inspiration for how “the same synthetic refrains come in and out throughout the record.”

Never shy to credit the input of others, Man Power is at pains to point up the influence of Suade, a fixture of the Newcastle music scene with ties to the Items & Things label. “He’s a genius,” he says bluntly. “He did mastering and some mixing on the album, and having his ear was so important. He also gave me access to outboard compressors and stuff like that from his studio, which added a really nice vintage feel to a lot of the tracks. He’s never been as well-known as he should be outside Newcastle, but apparently through this, Talabot and some other people have become aware of him and are going to work with him, so hopefully it’s been worth his while.”

Man Power’s plans for the rest of the year seem to outnumber the weeks left in it. From planned EPs for Voyeurrhythm and This Is Not An Animal and developing his own LBL imprint, to live shows alongside Rebolledo as Topaz Efimero, and planning a two-month stint in Mexico to record a second LP with a full-band setup, he looks very well-placed to make the most of the position he’s found himself in, not to mention thoroughly, refreshingly excited by it all. In the course of taking me through some of the torrent of ideas and plans in his head, he laughingly recounts an idea he and his friend Moscoman had recently to team up under the name Moscomanpower. I suggest that Matrixxmanpower might also be a decent idea, and his face lights up. “Wow…Matrixxman is probably my favourite producer of the last year,” he gasps, mental cogs spinning away immediately. “I think I might send him an email…”