Last weekend, XLR8R headed to Asheville, North Carolina for the inaugural edition of the city’s […] 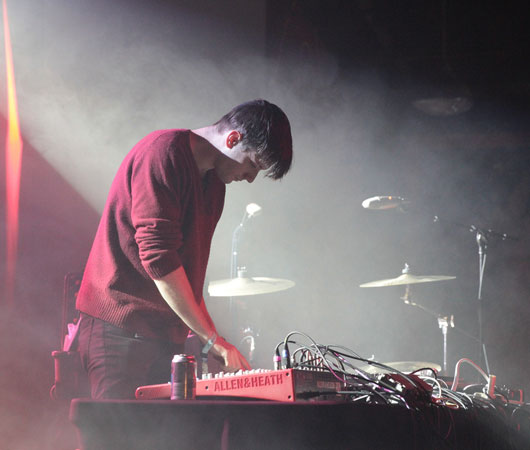 Last weekend, XLR8R headed to Asheville, North Carolina for the inaugural edition of the city’s […]

Last weekend, XLR8R headed to Asheville, North Carolina for the inaugural edition of the city’s Mountain Oasis festival. (For a complete rundown of our experience, take a look at our official review.) Amidst all the musical happenings, we took the time to speak with a couple of our favorite artists, including Ital (a.k.a. Daniel Martin-McCormick). The Brooklyn-based experimentalist has been involved with music since he emerged with DC punk band Black Eyes in the early 2000s, and later worked his way through dub, noise, and dance influences as part of Mi Ami before striking out on his own as Ital a few years back. Since then, he’s kept a rather busy schedule, so we were lucky to pin him down for a few minutes backstage at the Orange Peel during The Bug’s cataclysmic set. Over the course of our conversation, Martin-McCormick told us about his recent release on Germany’s Workshop label, his musical experiences in the South, and the shock of encountering EDM in real life for the first time.

XLR8R: How did you hook up with the Workshop guys?
Ital: I met Even Tuell on my last trip to Europe. He was DJing and played a Light Asylum song and stuff. I’d imagined… not that they’d be dicks, but that everything would be super tasteful. And he was like, “Nah, fuck it, I don’t care. It’s a good song.”

Have you played in Asheville before, perhaps with one of the bands you used to be in?
Maybe with Black Eyes… maybe with Mi Ami, but I don’t think so. I have a feeling Black Eyes played here 10 years ago. We did a lot of US tours.

What’s it like playing electronic music in the south as opposed to being here as part of a punk band?
It’s cool, last night [at the Nightlight in Carrboro, with $tinkworx and Dynamo Dreesen] was like a party. I feel like in LA, New York, SF, and Chicago, people are pretty up on their electronic music. There’s a scene of people who are making it and some clubs and stuff. Last night, when I played in Carrboro, after the show, people were just like, “thank you.” There’s stuff happening around Chapel Hill, but it feels like overall it’s an uphill battle. But this is crazy cuz [Mountain Oasis] is such an EDM festival. Tonight, the fucking guy between The Bug and me… do you know this guy, Robert DeLong?

I looked him up because I’d never heard the name before, but I’ve never heard him. He’s like a singer-songwriter, right?
Yeah! It’s fucking like Mumford & Sons plus Skrillex. It was fucking packed. All these people were there in raver gear. He had this acoustic guitar, would do these emotional lyrics, then go into the big drop. It was so bad that it was pretty amazing. There were probably about three times as many people there for that than there are watching The Bug right now, at least. From the front to the back of the room, hands up, people in this giant mass. He’s like, “What a fuckin’ great club tonight!”

It’s funny because that is just a world I never interact with, and now I’m playing this show being like, “Oh, there are a lot of guys with comfortable-fitting pants and hoodies with a blazer over it and the Kanye glasses going like this.” [puts arms in the air] I’m like, “Oh, this actually does exist. It’s not just this concept you read about on SPIN sometimes.” It kind of reminds me of the way there’s a bunch of underground music that’s poppy and then there’s this nether region… it’s not that big, but between, like, Animal Collective or Dirty Projectors, these top-shelf indie bands and these bottom-shelf pop bands. There’s this zone of indie guys that try to make it big and nobody wants that. [There’s also] a sort of weird no man’s land between EDM and all the rest of electronic music. It’s all electronic music, and you can play on the same stage and everything, but in the end, it feels like such different approaches, conceptualizations, languages, and stuff like that. Even though, theoretically, it’s the same.

There’s this one zone of people, what I guess you’d call the underground, and when you see something like a giant EDM DJ—people with big gestures, big music, big poppy vibes—it doesn’t feel like there’s a continuum. There’s a continuum between like Vatican Shadow on the one end, Kassem Mosse in the middle, and Theo Parrish on the other end. It’s one of many spectrums, but you can see how, through neighboring abutments and stuff like that, eventually one reaches the other. I feel like there’s this gap, and on the other side of this chasm is this EDM thing.