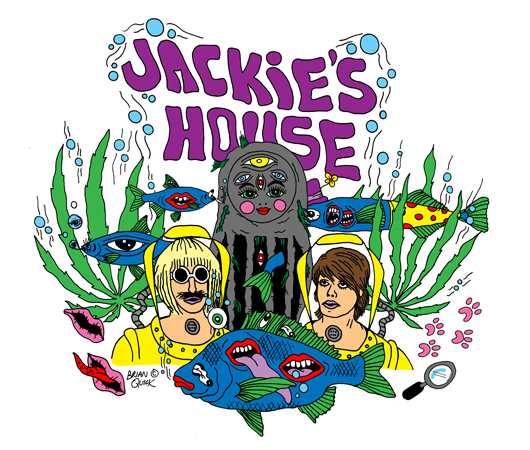 Given XLR8R’s San Francisco roots, Jackie House (a.k.a. Honey Soundsystem co-founder Jacob Sperber) is someone we’ve known for quite some time. Besides throwing some of the city’s best parties, Jackie can always be counted upon to deliver whip-smart (and often hilarious) commentary about the electronic music sphere without relying upon the stuffy sensibilities and bland dialogue that often governs such discourse. As such, we felt she’d be the perfect addition to the XLR8R team, and have created a new column, ‘Jackie’s House,’ in which she can banter with artists in her own unique way.

When I first proposed that Steffi be one of the possible first artists to be interviewed for Jackie’s House, I kinda shot myself in the proverbial disco boot. In the times I’ve spent with Ms. Doms, she has proven to be one of the few people who’s capable of shutting me the fuck up. Steffi can dish it as much as she can take it. With that said, if this introductory session of Jackie’s House seems demure, I would like to blame it on her. As little as is put out there into the wild about Steffi, when I took a look at the tracklisting for her new LP, Power of Anonymity, I am reminded that it’s not that there is “nothing to tell,” but rather much to hide. That’s why I invited Steffi on an all-expenses-paid scuba-diving trip to the bottom of the Amstel River in Amsterdam. Alongside this river is where the Dutch-born DJ/producer got her start, and I figured that if I was going to end up swimming with the fishes after this interview, I might as well start the talking down here. The underwater setting proved fitting though, as my clinical SHEsearch on Steffi turned up 10,000 leagues of aquatic references in her work. So, without further ado, here is my under-da-sea chat with Ostgut Ton artist and Panorama Bar resident Steffi.

Jackie House: I have never been to Amsterdam and XLR8R wouldn’t pay for the in-flight internet on the way over here, so I was unable to do some safety research. Is it safe to be in the Amstel? Is swimming in here common? Are there going to be sharks? Any anecdotes about the Amstel you can give us to get us comfortable?
Steffi: We will have bad visibility, that’s for sure! The water isn’t exactly the kind you would want to be floating around in, to be very honest with you. Therefore swimming isn’t quite common here, apart from a few drunken tourists that get knocked over by their coffee shop intake and lose their balance. My friend once rescued somebody out of the Amstel who wanted to end her life. He saw somebody in the water and immediately jumped in. By the time he got this person back on the shore, he almost got killed himself because of the woman’s major disappointment. A whole lot of kicking and screaming went down and then he realized that this woman was trying to kill herself and as you can imagine, the interruption did not go down very well.

I apologize for the limited craft services, it was already difficult enough to get us down here, let alone a spread. I saw on your artist rider there were requests for a bathtub and fresh fish, so I figured this was the perfect place for the interview. Tell us about your relationship to water. Are you a water sign? Did you swim a lot as a kid? Wait, can you swim? If you can’t, we might need to go back to dry land…
Have you ever seen the movie Splash?

Congratulations on the upcoming album. It seems somewhat impossible to imagine that you were able to find time to make a full-length given your DJ schedule and constant traveling. After giving Power of Anonymity some listens, it seems like speed, passing objects, and travel has had an effect on your tempos and vibes. “Everyday Objects” sounds like a driving track or the soundtrack to a speedboat. What drove the energy up on the new album?
Actually, I took time off from DJing to be able to be in the studio non-stop for a couple of months and strictly focus on making a new album. I wanted to make an album that I would like to carry in my own record bag, so it’s more dancefloor oriented. It’s a bit faster, as I like to speed it up every now and then. 😉 Actually, I used a new studio set-up with a different way of sequencing; my hardware is hooked up differently, so now everything is connectable with everything else. This way, I had much more freedom in my way of working.

You start both of your full-lengths with songs named after Disney movie characters. There’s Lilo, an inquisitive pre-teen Hawaiian surfer girl who makes friends with an extraterrestrial fugitive dog that also surfs. Then there’s Pip, a chipmunk friend of Giselle who saves her from a troll in that godawful Enchanted movie. Do you watch a lot of cartoons? You never really struck me as a Saturday morning, sugary cereal kind of gal. I feel like everyone has cried at a Disney movie—I cried for WALL-E. Has anyone ever told you that your music brought them to tears? Have you cried for a cartoon before?
I hate to disappoint you, but both titles are named after friends, but they did not appear in the Disney movies as far as I am aware of. I am not so much into Disney to be honest, and I’m also not so much a sugary cereal girl either. The Pink Panther was more my kind of guy, really. I like his slow pace and his mystical eyes.

You are a big Drexciya fan. (Another water theme…) Drexciya is a pretty heavy part of the Atlantic myth, which was extremely fitting for the radical politics of Underground Resistance. Geek out on Drexciya. What are your favorite tracks? Why do you love them so much? How do you relate to the band’s politics? Do any of your songs pay homage to the group?
I really appreciate their music and the producers that are connected to them. It’s not so much the myth that fascinated me, it’s the genre/style more than anything. I do like the fact that there was very little artist profile or publicity around them back in the day. It’s a great example that good music speaks for itself and it does not necessarily need a face and/or image. Some of the songs on my new album have an electro feel to them, but it’s not a homage or anything like that. It’s more me closing a circle and going back to the early days of DJing. I was very influenced by electro and IDM in the widest sense and I noticed that I have been searching for that energy again lately, a kind of naive vibe where nothing really matters, just good music. I wanted to bring that back in the studio with me when I started to work on this album.

I heard a rumor you once slept under the DJ booth after a set you played while the next DJ played after you. Is that true or not? (I mean, even if you deny it, I am going to believe it is true.) Sleep fascinates me. I take it you are a hard sleeper? Do you have vivid dreams? Your music often is dreamlike—you lean toward dreamy pads and hypnotic leads. I have had nightmares about DJing during heavy gigging periods where the records start warping or my DJ bag gets misplaced—do you ever get those?
It’s not a rumor, it’s a fact! Hahahaha. There’s no point in denying it really. I sometimes have the weirdest dreams about DJing. The classic nightmare where you are at a gig and you are not able to mix a single record right because your arms are jelly or your records are made from chocolate, the turntables have no needles, your record bag floats away in a river. The worst nightmare was me playing on one of those bridges in Amsterdam that cross the canal and my record bag was on the other side of the bridge and I had to walk all the way down to get a new record and by the time I was back and ready to mix it in, it turned out to be the wrong record or the other record ran out. Disaster!

“Treasure Seeking” is the only track with vocals on the new LP, and it features the slickest pirate-booty snatcher in the game, Virginia, and acid nasties by Dexter. It seems like you have this classic homage to pop albums by having one vocal single on each LP. Surely Ostgut Ton does not require that and you are probably one of the few artists on the label that can make these kinds of tunes. Will you continue this trick for all of your LPs? Are there some pop stars that inspired you to do this? Bowie? Prince? Lady Gaga?
Are you winding me up?! Lady Gaga!!! And who says the acid nasties were from Dexter? 😉 LOL. It’s not really my trick to put a vocal track on every LP. It was a conscious choice for the first album and a spontaneous happening for the second album. I had the basic frame for “Treasure Seeking” and asked Dexter for some additional synth work and then it kind of hit me. I gave Virginia the same parts, so they worked on it kind of simultaneously and there it was! I like the fact that I have no boundaries when I work with Ostgut Ton. They don’t expect anything from me. They give me all the creative freedom.

So this next question was a hard one to decide if I could ask. I even consulted two friends to see if it would be appropriate. Personally, as a gender bender myself, I feel very strongly about the boundaries of media and gender in any field, but especially in dance music, an industry that’s wrought with gender inequality and machismo. In fact, I know many people who are inspired by your approach to these issues and your finessed approach to being a woman in techno. So please know this question comes from a place of love and my truly inquisitive nature… How do you get your hair like that? Like, does it just naturally fall in place all feathered like that or do you need to use a flat iron? I mean, I have thick hair too, but it can’t lay all back to front like yours without the back kind of popping up and looking crap. Do you use product? It doesn’t look like you use product. Who cuts your hair, can we get a shout out?
I am sorry, I can’t have you peek in my kitchen, as I know you have a tendency to imitate people all the time. I remember your Katy Perry phase. Sorry!

Finally, let’s do something that will become a regular closing segment on Jackie’s House. It’s called Hippie Shit, and involves some rapid-fire questions on what kind of reluctant hippie you are…

Hendrix or Joplin?
Jimmy on the left, Janis on the right, and me in the middle. Oh shit, we forgot Stevie and Patti!

If you could only borrow clippers for enough time to do one or the other, would you clip your toenails or fingernails?
Toenails? What are those? Have you ever seen my toes?

Well, I am wet, literally. I think these scuba suits have a time limit or something. Let’s swim outta here and find a lager. Any recommendations for places to go near the water in Amsterdam?
JBW25!