On the phone from London, producer James Blake emits a calmness and an intense, focused […] 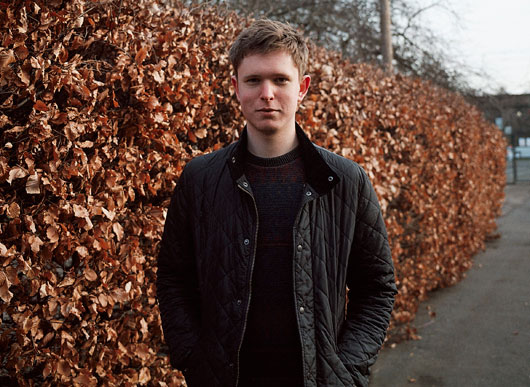 On the phone from London, producer James Blake emits a calmness and an intense, focused […]

On the phone from London, producer James Blake emits a calmness and an intense, focused passion for his craft that belies his 21 years of age. Part of a new breed of musicians making richly complex tracks under the ever-widening label of dubstep, Blake’s take on the genre is utterly unique. Lurching, stuttering, and always saturated with harmonies (both sampled and created by his own voice), his tunes have strong R&B and classical elements without really sounding like either. With just a handful of songs under his belt, his buzz is palpable, and XLR8R took a few moments to catch up with him on his way from class to the practice rooms at London’s Goldsmiths University, where he’s finishing his degree.

Tell me about your musical background.
I started producing at university, so I’ve only been doing it for two years, but in terms of music in general, I’ve been playing piano and singing since I was five or six. I learned piano classically, and that really shaped me, because when you study classically you see things quite a different way—I took ideas from classical that I didn’t really appreciate at the time, but now I see it as invaluable. Even though, alongside all of that, I was improvising and singing and listening to all sorts of music.

Your tracks are remarkable because of the vocal elements in them that act as musical anchors. Can you tell us more about how you use vocals?
Vocals have sentimental value—they always do with me—and I’ve always wanted to sample things that I already love. [Even the] R&B samples, they’re not just any songs—they’re still songs I loved when they came out, probably quite embarrassingly, I would have been afraid to admit it at the time, but nowadays those vocals really sit in your subconscious. And I think using them taps into a massive subconscious in our generation. But people don’t just want to hear them straight; they want to hear echoes of them in their dance music.

Echoes?
I’ve always been a bit sensitive about sampling. I’ve heard lots of records where people just sample old funk records directly and they don’t really change [the sample] at all, and for me I think I’d get the same vibe off of just listening to the original. It doesn’t give you any sense of uniqueness. So I quite like to mask the identity of those samples, because otherwise I think, “Well, that would be too obvious.” So, like, pitching vocals to sing new melodies, that’s something that I always found fascinating, a sort of a Burial-esque technique—he was a massive inspiration. But also by juxtaposing my vocals with something like that, I’m sort of bringing myself closer to the original. I can almost feel like I’m singing with them.

Your music is very hard to classify. Do you think of it as dubstep?
I came from a completely different musical place before I started producing dubstep, but I did get heavily into it for a couple of years. And I think I’ll always have one foot inside the dubstep scene even just through being influenced by certain artists, in the same way that I’ll always be influenced by D’Angelo or Stevie Wonder or Joni Mitchell. A lot of people are quite sensitive to the use of the word “dubstep,” and for a while I thought, “I’m really glad to be breaking out of this sound.” But now I quite like being bundled in with it because when I think about the people that have gone before me and are making incredible music, like Mala… I still listen to his records… then great! I mean, I don’t get associated with the massive tear-out wobble end of dubstep, I sort of get the nicer end of dubstep, so I’m happy with that.

What’s in the works for you?
I’ve got two EPs coming on R&S. The first will focus on sampling R&B vocals that were buried deep in my subconscious. It’s got a dancefloor feel, and there’s a collab with Mount Kimbie on there, too. The second will draw from recordings I did recently of myself singing and playing piano—more introspective and personal. I’m also working on a vocal album of electronic production but of my (unadulterated) voice. It’s pretty minimalist in vocal arrangement, and the production serves the voice, not the other
way round.

James Blake’s CMYK EP is out now on R&S. His debut LP is expected by the year’s end.