When one takes a look at 50Weapons‘ catalog over the past two years, the logic […] 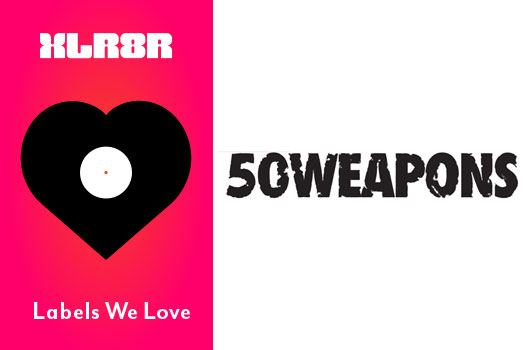 When one takes a look at 50Weapons‘ catalog over the past two years, the logic […]

When one takes a look at 50Weapons‘ catalog over the past two years, the logic would follow that the Modeselektor-helmed imprint had come into being at least in part to present the group’s personal slant on the increasingly divergent paths of what could be considered bass music. However, this is far from the case, as 50Weapons’ origins in fact date back to a “wild night in Manchester” where the two Berlin residents came up with the idea of releasing 50 records, all of them 50-cent, white-label bootlegs of what they liked to call “just pure high-class DJ music.” Ultimately, the pair’s initial concept gave way to something more substantial and between the first release—which appeared in the form of a single-sided vinyl 12″ from Modeselektor itself—and now, the label has completely transformed into a more traditional endeavor, piecing together an enticing series of singles, EPs, and albums from a roster that has so far proven to be as diverse as it is dependable, as forward thinking as it is dancefloor ready.

50Weapons is very much an artist-run label. Neither Gernot Bronsert or Sebastian Szary (the pair of producers who make up Modeselektor) consider themselves to be doing “A&R” in the traditional sense, explaining that the only real guiding principle behind the imprint has been their mutual love for, as they simply put it, “good music.” With that, it’s hard to map the exact trajectory which transformed 50Weapons into what it has become today. The early 12″s, which featured remixes of Modeselektor and Moderat (the collaboration between Bronsert, Szary, and Apparat) by the likes of Siriusmo, Shackleton, SBTRKT, Bok Bok, and more began giving way to split singles of original material around 2010—a format which first introduced Benjamin Damage, now a staple of the artist roster, into the fold.

In a way, 2011 seems to have been the turning point at which Bronsert’s and Szary’s label—which actually rolled out its first release back in 2006—began to come into its own. The innovative Cosmin TRG penned 50Weapons’ first outright solo 12″, “Sperat” b/w “Izolat,” followed shortly thereafter by a collaborative effort between Benjamin Damage and Doc Daneeka that yielded one of the label’s flagship tunes in the monstrous, rolling “Creeper.” As the year went on, another 12″ from TRG joined singles by the unpredictable Anstam (who, a few months later, would drop his first full-length for the label) and the garage-minded Phon.o to round out 2011’s first half. With the formative Radius EP from London trio Dark Sky, Cosmin TRG’s debut LP, Simulat, and a pair of tough techno tools from Berghain resident Marcel Dettman highlighting 2011’s latter half, 50Weapons solidified itself as an outlet for consistently creative club music, moving between garage, techno, and the virtually limitless mutations of bass with remarkable fluidity. According to the label heads, this was not part of some grand master plan, but more of a reflection of the pair’s affinity for powerful electronic music, saying, “We just follow our feelings and go with what we really like.” It’s really that simple to Bronsert and Szary.

This year has found the label continuing to push the stylistic limits of its catalog, bringing renowned techno, dub, and everything-else explorer Shed on board for a single and an immense full-length, The Killer, while also enlisting the likes of Addison Groove and A Made Up Sound (a.k.a 2562) to join the label’s core artists. From the moody, amorphous techno and UK bass stylings of Damage and Daneeka’s debut collaborative album They!Live to the continually analog-leaning constructions of Cosmin TRG, not to mention the tech-infused bass and house workouts of label newcomer Bambounou (whose first full-length offering, Orbiting, is set to drop before the year’s end), the musical path of 50Weapons is still as hard to pin down as ever. Perhaps as a nod to this prolific diversity, the recurring presence of the 50Weapons of Choice compilation series (now in its third volume) has helped hold the imprint’s territorial span together. By surveying the catalog in regular intervals between every ten 12″ releases and showcasing the catalog’s standout tracks, the collections have helped map the dots that connect the label’s genre-spanning run.

In recent memory, few record labels have ascended to the forefront of underground dance music at the same pace and with such understated aims as 50Weapons. Yet somehow, between a constant touring presence, endless hours spent in the studio, and the litany of other activities Modeselektor piles onto its plate, the pair has successfully managed just that, taking the endeavor a long way from its—perhaps short-sighted—initial vision and molding it into one of the most trustworthy names for new and established artists to flex their might within the adventurous scopes of bass-minded production. Looking beyond the immediate plans (which include another Anstam LP, the aforementioned debut album of Bambounou, and the return of Dark Sky to the fold), Bronsert and Szary are hesitant to give many details when it comes to the label’s future, saying, “Let’s keep it a secret,” before finally touching on a concrete point of the label’s philosophy: “We only run our labels to surprise people, and ourselves.”