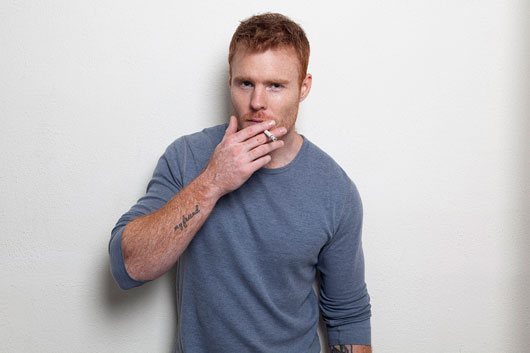 In August of last year, Hercules & Love Affair mastermind Andy Butler (pictured above) unveiled a collaborative single produced by himself and San Francisco DJ Jason Kendig, the vintage house-inspired “And I’m (So In Love With You).” That 12″ was the first record to drop from Butler’s Mr. INTL imprint, and set the groundwork for a fresh dance music hub with one strict rule: Nothing can sound “pre-’85 or post-’94.” Mr. INTL has since remained true to its ethos—releasing stellar club-specific music like Kim Ann Foxman’s “Creature” and two industrial-tinged tracks from Mark Pistel, Ben Stokes, and Jack Dangers (of Meat Beat Manifesto). We stopped Butler in the middle of his hectic schedule to pick the multifaceted artist’s brain on his lovely new label, its self-imposed limitations, and, of course, its brilliant display of classic house.

XLR8R: Tell us a bit about how Mr. INTL came to be.
Andy Butler: I decided that I needed a release for my strictly club-oriented music, and realized there were a bunch of really great artists that wanted to make music inspired by the same era of classic house that I grew up on.

How do you juggle the work of running a brand-new label amidst the recording, touring, and everything else with Hercules & Love Affair?
I don’t know. It is hard. I have some help from management in London, but I have to procure remixes and reach out to talent on my own. I have been so honored to have artists like Faze Action, KiNK, Deetron, DHS, Jack Dangers, and James Curd (from Greenskeepers) doing remixes.

Mr. INTL is renowned for not releasing anything that “sounds pre-’85 or post-’94.” Why focus solely on such a specific time in dance music?
This was the music that in some ways woke me up in terms of my identity, even my spirituality in a way. It is very house- and techno-focused, but remember, dance music during this era also included industrial, EBM, new beat, and ambient, so it is potentially a very fertile and diverse era to explore.

Tell us a bit about the artists Mr. INTL has worked with, and why you want them to be heard.
Kim Ann Foxman is an emerging talent with a strong appreciation for house of the deep and trancey kind—really soulful, but also mesmerizing. Mark Pistel is a veteran of dance music, and his collaborations with Jack Dangers from Meat Beat Manifesto and DHS [a .k.a. Ben Stokes] mark a potentially really fun return to four-on-the-floor for those guys. Wolfram is a more Euro-influenced producer, great at producing bangers. Why should they be heard? Pretty simple: immense talent.

The latest Hercules & Love Affair album sounds informed by much of the same era of house that Mr. INTL aims to recapture. For you, what separates your work on Mr. INTL from that music?
There are a couple of pieces that are directly influenced by that period. But, for instance, the mid-tempo and slower, experimental side of my songwriting would not show up on a Mr. INTL release. Hercules is an opportunity to express myself more as a formal songwriter.

What’s on the horizon for Mr. INTL?
An amazing new solo track from Hercules singer Shaun J. Wright, with really banging remixes. It is something quite special. Plus, another great Kim Ann Foxman EP, as well as some new stuff from my project with Jason Kendig.