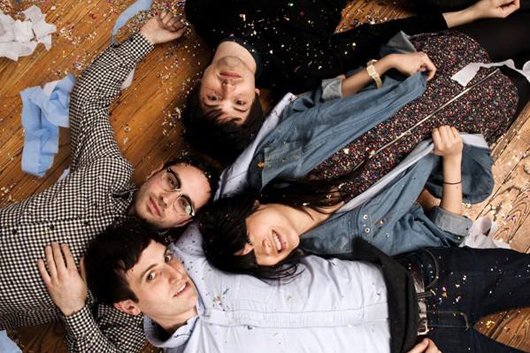 Weathering the ups and downs of 20 not-so-sleepy years in indie pop.

Oakland-by-way-of-Washington, DC indie-pop stable Slumberland is now 20 years into its life as a record label, and yet they remain both strikingly relevant and persistently trendsetting. Having made their name by releasing music from the noisier outskirts of pop, with artists like Velocity Girl, Stereolab, Hood, and The Aislers Set seeing the label through its early successes, Slumberland ran a bit of a victory lap last year with records from The Pains of Being Pure at Heart, A Sunny Day in Glasgow, Crystal Stilts, and Cause Co-Motion showing up on everyone’s radar. Here, label head Mike Schulman tells us about his two decades spent purveying fuzzy, buzzing indie pop.

The Pains of Being Pure at Heart – “Everything With You”

Why did you first start the label?
We started Slumberland as a way to document a little scene of bands that we had going at the time—Big Jesus Trash Can, Velocity Girl, Black Tambourine, Powderburns. It was pretty much the same six or eight people in all the bands, we’d all met at school at the University of Maryland, and had been inspired by punk rock, noise rock (Birthday Party, Big Black, Sonic Youth), DIY pop, and C86 stuff. After a few years of playing shows locally it seemed like a good idea to document what we were doing. And since the indie 7″ scene was really booming at the time, and I worked at a store (Vinyl Ink), it made sense to start a label and put out a single.

What other labels influenced you at the time?
Creation, Flying Nun, Bus Stop, Factory, Rough Trade, K, Postcard, Treehouse… the list goes on. Being a bunch of record collectors, we were all pretty aware of the labels that the records we liked were on, and so always paid attention. I have to admit, I didn’t have a great idea of what a record label actually did, but I did totally vibe on the ones I liked for their curatorial taste.

Where does the name Slumberland come from?
An early 1900s comic called Little Nemo in Slumberland, written and drawn by Winsor McKay. Beautiful and surreal, we all really dug it.

Crystal Stilts – “Love is a Wave”

How have you chosen what records to release and what bands to work with?
It’s really just down to my personal taste. In the early years, I did give some thought to working with bands that I thought might have trouble finding a label over here. There weren’t many pop labels going in the U.S. back then. Now, of course, there’s loads of labels putting out all kinds of music, so I really just concentrate on those bands I really like, like working with, and who understand the label and our ethos—and who just give me that buzz.

There have been a number of hiatuses since the label has started.
There have definitely been a few lull periods where I either wasn’t hearing much I wanted to put out, or just had other stuff going on in my life that required me to scale back the amount of time spent on the label. I’ve always had full-time jobs in addition to the label, so if those jobs took more time, I’d have to give the label less. I think I’m finding a better balance now; while I still do all the everyday work, I’ve found press and radio people that I like to work with and trust and can take some of that load off me. I’m probably just getting better and more efficient at it all now—after 20 years I would hope so!

What other current labels are you excited about?
Captured Tracks, Siltbreeze, Mojuba, In the Red, Hyperdub, Soundway, Pressure Sounds, Soul Jazz. I still pick up pretty much everything on Sound Signature and KDJ/Mahogani. Even though the music business is in turmoil, it seems like there’s more great music out there than ever.

Liechtenstein‘s Survival Strategies in a Modern World is out now on Slumberland.

pictured The Pains of Being Pure at Heart