On its new album Memory, the intercontinental duo expands its reach and narrows its focus. […] 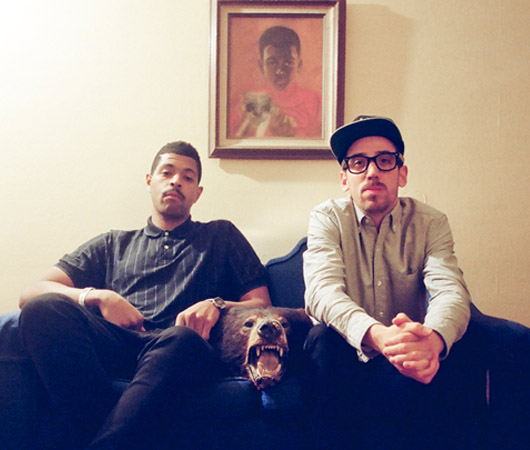 On its new album Memory, the intercontinental duo expands its reach and narrows its focus. […]

On its new album Memory, the intercontinental duo expands its reach and narrows its focus.

Antaeus Roy and Bryant Rutledge have tapped into a truly remarkable connection over the past four years as Lazer Sword. After first meeting in the West Coast haven of San Francisco (and—full disclosure—working together at XLR8R), Roy and Rutledge began their production careers simultaneously, venturing through the neon grasses of leftfield hip-hop, buzzing electro, and gut-rattling boom-bap with a (excuse the pun) lazer-sharp focus. After an early string of sought-after singles and remixes, followed by the eventual release of the pair’s debut self-titled LP, time and circumstances ran their course, sending Roy to Berlin (after a brief stop in New York) and landing his counterpart in Los Angeles shortly thereafter. For a while, it seemed that the Lazer Sword partnership might be destined for the back burner, with Roy enjoying a well-regarded solo career as Lando Kal in Europe and Rutledge putting in consistent work from his SoCal base under the guise of Low Limit. Yet the pair’s collaborative chemistry was simply too potent to set aside, and now, with a little help from Modeselektor and its Monkeytown imprint, the international production duo has returned with Memory—an LP brought together by experimentation, evolution, and file sharing.

“Missed a Spot” from Memory

As if it was necessary to find another reason why the internet is so amazing, it is the ability to share data over thousands of miles that makes Lazer Sword possible at all. The outfit’s entire album was put together with the duo sharing Ableton files through Dropbox, exchanging the tracks-in-progress back and forth a number of times before landing on a final product. Even still, this barely scratches the surface of the pair’s collaborative process, one that has no doubt sharpened and honed over several years of real-life interaction. “We’ve gotten to a point where we both know each other’s style pretty well,” notes Roy. “It’s actually really fun to get a session back when it sounds totally different. It can be weird to hear the new transition that’s been made, but it’s fun to take it in too. It adds to the experimentation.” When discussing their process, both Roy and Rutledge seem entirely open to possibilities. It becomes apparent that they check their egos at the door and simply work as a unit—albeit one separated by an ocean and two continents. Somehow, alone in their studios, they manage to keep the other in mind, fusing styles and inclinations together as one entity, so much so that even those very familiar with each member’s solo work would find it hard to point out which element or which movement could be attributed to which party. Somehow, this combination of production styles beamed across the world in ones and zeros yields a truly seamless collaboration.

Memory presents a considerably new side to Lazer Sword, almost entirely leaving behind the “future-blap” inclinations which marked its earlier output. Instead, the pair steps firmly into the growing bass-music continuum, lacing its productions with fragments of house and techno (from both the Berlin and Detroit side of the spectrum), juke, garage, and everything else in between. In fact, there’s not a single heavy-handed snare or buzzing lead (two sounds which ostensibly defined the “Lazer Sword sound” only two years ago) to be found on the entire album. Clearly, both Roy and Rutledge (separately and collectively) have evolved their sound since the Lazer Sword LP appeared, moving away from the more aggressive natures of space-age hip-hop and bombastic electro-glitch in exchange for woozy chords, chopped harmonies, and spiralling percussion. “I feel like we’ve been working towards the direction where our album is now for a while. It’s been a more gradual evolution than it might seem,” points out Rutledge. “When Antaeus and I met each other, we were just beginning our lives as producers, and rap was a starting point for both of us, but I feel like we’ve become a lot more interested in dance music over the years.”

However, “dance music” is a rather far-reaching term, and Memory is not concerned with a lot of it. There is a specific sound which characterizes the record, one which is informed by much of the UK-and-beyond bass scene, moving through its various facets with an aimed focus on smoothed-over textures, landing the listener in a slowly revolving space between dense and brooding atmospheres. “Toldyall,” the LP’s first full-on production, sets the tone rather clearly. Its drum programming is very much indebted to footwork, but the rest of the tune has more in common with the warm trappings of analog techno. From there, the hybrids take their different forms—”Point of No Return” pits a shuffling break against ravey stabs while “Better From U” swings with a half-time step, filled to the brim with tuned toms and luscious, gliding chords. No matter where each album cut ends up, there is a thread that runs through each contribution, a sort of imbued soulfulness that renders itself sonically in the form of vast productions where each element drips and overlaps into the others in an almost gooey fashion. Roy gleams a bit of insight into how this sound was landed on, “Over the last year or two, both Bryant and I have acquired a bit more hardware, and we definitely tried to incorporate that into this album. We didn’t want to necessarily have that full-on computer sound, [but] it’s fun to tweak toys here and there and mess with sequences.”

This sonic consistency lends itself to a certain mood, one that’s not quite introspective but definitely isn’t yelling out for attention. It’s a temperament that is quite different from the pair’s established discography, but is also something that it seems had been turning in their minds for some time before approaching the new record. “Two or three years ago, I think there was almost a defining point where certain people got into the really hard stuff,” says Rutledge. “Some people ended up really into dubstep and everyone else was like fuck that shit.” It’s safe to say that Lazer Sword ended up on the “fuck that shit” side of the equation. His counterpart lends a slightly more cerebral outlook on the group’s current sound. “As an artist, it’s fun to test yourself a bit and work with new styles and techniques. It keeps it interesting for everyone, really. If we were to go back and say, ‘How can we keep this relevant with all our past efforts?’ it’d be boring.” Roy goes on to add, “We’re trying to bring soul back into it a bit, trying to have more rhythm and more melody. When it comes down to that [big room dubstep] stuff, it’s almost the exact opposite. We’re looking more towards having better structure and melody in our music.”

It’s surprising to find out that the entire 11-song effort came together in about a two-month period, resulting in—as they both admit—a rather accurate picture of the mindset they were operating under during that time. According to Rutledge, this was partially by design. “Something that might have flawed our last record is that we tried to do a whole range of styles and [looking back,] I don’t necessarily think that was the greatest idea. We had discussions before we started working, as far as where we felt the direction was going and how to meet in the middle and we thought it didn’t make sense to try to hit every angle.” This sentiment rings true as the LP runs its course, as there is a noticeable cohesiveness between each tune and nothing appears out of context or attempts to turn a head on the “big picture.” Rutledge explains, “It’s an album, so it’s a story to tell, really. If something was out of place, we decided not to try to just shove it in there.”

But the question remains, will this new direction alienate their established fan base? So far, both Roy and Rutledge seem to think their evolution has been well received, as Roy states, “I think [the new style] opened up the gate a bit more… we were afraid we were going to scare some people away a bit. For the most part though, our fans are going with the transition just as much as we are.” And who can blame them? Even as Lazer Sword makes a clear statement in a new direction—putting them more in line with artists more like labelmates Benjamin Damage and Doc Daneeka or Machinedrum (who, incidentally, counts for one of two guest appearances on Memory, the other coming from Berlin-by-way-of-Detroit producer Jimmy Edgar)—both members’ production abilities have only sharpened with time. Ultimately, some fans will undoubtedly be left behind, but hopefully plenty of new ones will be gained, and, in the end, a more compelling and rewarding picture of both Lando Kal and Low Limit will take shape. As long as the internet allows for the exchanging of musical ideas with such rapidness and disregard for distances, most producers will have to move just as quickly along with it. Doing so with the sort of genuine inventiveness Lazer Sword displays on Memory will be the test for those who wish to push the envelope further.

Lazer Sword’s Memory is out now on Monkeytown.