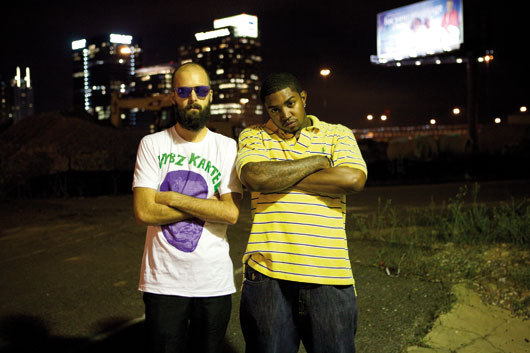 Not since the days of Bobby Konders’ and Kenny “Dope” Gonzalez’s ragga-hip-hop hybrids of the early to mid-’90s has the US-Jamaica bashment connection seemed so energized as it does with Brooklyn producer Dre Skull‘s Mixpak label. Earlier this year, Dre Skull paired hot gyaal Jamaican deejay Natalie Storm with UK producer Sticky’s Jumeirah Riddim for the single “Look Pon Me,” which became a massive UK funky hit. But in his short stint running Mixpak, Dre Skull has also collaborated with big dancehall artists from Ms. Thing to Vybz Kartel.

Dre first linked with Jamaican artists when he contacted gruff-voiced Rasta singjay Sizzla for 2009’s energetic “Gone Too Far.” The Cleveland-born producer, who was inspired by Lee “Scratch” Perry’s studio techniques and the Jamaican concept of “versions” (re-using rhythm tracks), got into dancehall via Yellowman, Sister Nancy, and Super Cat. “I think it’s cool that [Super Cat] linked up with the New York rap world,” he says.

But Dre is quick to mention that he does more than just dancehall-club hybrids. He has worked with Southern rappers Lil Scrappy and Sissy Nobby, produced Baltimore club jams with MC Juiceboxxx, and released his own rave-influenced tracks. Still, he plans to continue working with Jamaican acts and plans to visit Kingston this month. “If everything comes together, I’ll be working out of Shaggy’s [Big Yard] studio and recording with a bunch of folks, including Busy Signal, Elephant Man, and Natalie Storm,” he says.

So how do Jamaican artists react when he plays them his uptempo electro-dance material, which sounds more like Dave Aude than Dave Kelly? “[They] are pretty open-minded in terms of the sound palate,” he explains, adding that Jamaican music has “a long history of embracing studio technology and pushing it to its limits—whether it’s reverb, delay, drum machines, synths, or Auto-Tune.” He thinks it’s what contributes to their openness to new rhythms and tempos and keeps dancehall vibrant.

Another surprise has been the extended life of Dre Skull’s single with dancehall icon Vybz Kartel. The “Yuh Love” video has a million hits on YouTube and was recently licensed to Jamaican label Tad’s, bringing things full circle. So while his Jamaican productions continue to pop, he’s also starting music projects with artists from Belize, the UK, and Atlanta, all of which suits Dre Skull’s expansive styles. Or as he says, “I’m keeping it varied—I love music, not genres.”