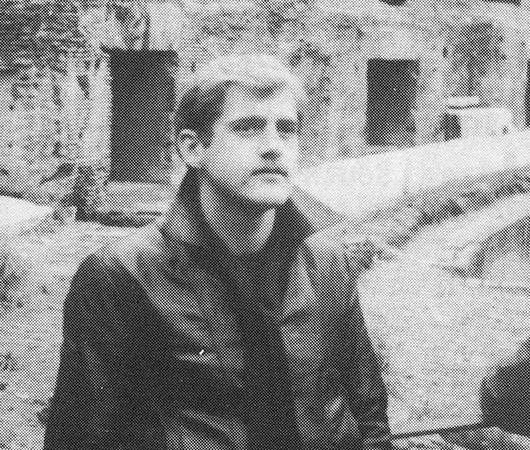 Along with Arthur Russell, Patrick Cowley (1950-1982) is considered one of the “lost masters” of underground gay electronic music who passed away due to AIDS at a very young age. Rediscovered by a new generation of electronic musicmakers at a time when homosexuality isn’t considered quite so icky, Cowley’s production work, unabashedly gay aesthetic, and pioneering studio experimentation are finally getting their due.

As a compilation of Cowley tracks composed between 1973 and 1981, School Daze spans his early, heady ambient-experimental work to his, er, climactic hi-NRG output. Moreover, the album serves as a great introduction to the man’s achievement, lacking only examples of his natural talent with singers and organic instrumentation. It’s an often space-jazzy, deep-and-wiggy ride through the netherworlds of animal lust, with 11 tracks like “Pagan Rhythms,” “Zygote,” and “Seven Sacred Pools” setting the “out there” cosmic tone. Those excellently produced soundscapes, with grunting overdubs, work sublimely with the films’ feathered-hair and shaved-pecs man-on-man action. School Daze also has the distinction of being the first gay-porn soundtrack to be streamed on NPR, which must be some sort of community affirmation, right?

For those coming to Cowley for the first time, here are a few juicy pointers on what you need to know.

Cowley was an East Coast transplant who moved to San Francisco and started tinkering with electronic music.
Cowley was born in Buffalo, New York and took a very early interest in music. He played the drums in several local bands before moving to San Francisco when he was 21. At that point, he was already gleaning musical inspiration from electronic-music pioneers as diverse as Wendy Carlos and Giorgio Moroder. During his studies at City College of San Francisco, he used the school’s electronic equipment to synthesize these influences into a project called the Electronic Music Lab. While drifting from advertising-like jingles into more experimental styles, he also modified and built his own analog equipment, which he combined with classic instrumentation to produce what would eventually come to be known as the “San Francisco sound.”

Even Sylvester took notice of Cowley’s talents.
Cowley’s growing reputation as a local electronic wiz kid began attracting major up-and-coming disco acts. One of these acts was Sylvester, a former member of notorious acid-dropping SF performance troupe the Cockettes, who had maintained a glamorous, androgynous persona to go with his soaring falsetto voice. In 1978, Cowley began polishing, remixing, and producing Sylvester tracks that went on to become disco staples, including “(You Make Me Feel) Mighty Real” and “Dance Disco Heat.” Those were big chart hits, but Cowley really gained widespread dancefloor fame under his own name with an 18-minute remix of Donna Summer’s “I Feel Love.” That remix, needless to say, expanded the possibilities of the dance remix to a radical extreme.

Cowley was a key figure in the early ’80s hi-NRG scene.
After disco reached peak mainstream saturation in 1979, the sound began to take a bouncier, more frenetic turn on underground gay dancefloors. Hi-NRG pumped through the bathhouses and gay bars of San Francisco and beyond, driven by unabashedly homocentric Cowley compositions like “Menergy” and “Megatron Man.” In 1981, Cowley teamed up with engineer and producer Marty Blecman to launch Megatone Records. Megatone became emblematic of the hi-NRG sound, releasing records like Sylvester’s “Do You Wanna Funk” and “Don’t Stop” and Paul Parker’s “Right on Target.” Cowley continued to compose under his own name as well, turning out the tropical-disco number “Get a Little” and the Megatron Man and Mind Warp albums.

Cowley also dabbled in new wave.
During his disco journey, Cowley took some fruitful detours with vocalist Jorge Socarras. The duo recorded a batch of edgy songs from 1975 to 1979 as Catholic, which leaned towards a ripe, aggressive, Krautrock-meets-punk aesthetic without completely abandoning the electronics. (“Robot Children” is the indelible classic from this period.) In 1980, Cowley also produced darker synth-pop outfit Indoor Life, also with Socarras on vocals, that became a seminal, sinuous minimal-wave act, often described as a new-wave Roxy Music. Socarras says of his work with Cowley, “Patrick Cowley articulated and codified a musical vernacular from which electronica continues to draw from today in many of its permutations.” Cowley’s second solo album, Mind Warp, also took a more new-wave, dystopian tone. Mind Warp was recorded while Cowley was beginning to succumb to AIDS, and he died soon after it was completed.

The Cowley revival has been underway for nearly a decade.
In 2004, the revival of Cowley’s name and sound on San Francisco’s gay dancefloors began in earnest. DJ Bus Station John started Tubesteak Connection, a Cowley-heavy weekly party in the city’s gritty Tenderloin area that aimed to revive the spirit of the gay bathhouse disco era—it was one of the first parties to impose a no-cell-phone rule—a period previously considered taboo by many gay men still emotionally scarred by AIDS. Inspired by Bus Station John, generation-spanning DJ collective Honey Soundsystem (which includes Dark Entries label honcho Josh Cheon) researched the legacy of Megatone Records—which had held on until 1992 and released numerous house and techno records—and discovered a treasure trove of unreleased and overlooked Cowley tracks. The members of Honey began staging elaborate, séance-like nightlife tributes in the late 2000s, reissues of Indoor Life tracks and a Catholic compilation appeared, and, now, here’s School Daze, a kind of holy grail—not just for excited vintage gay-porn completists, but hot-and-heavy electronic enthusiasts as well.