Montreal is just too fucking cute. Honestly, the word picturesque doesn’t do justice to this […] 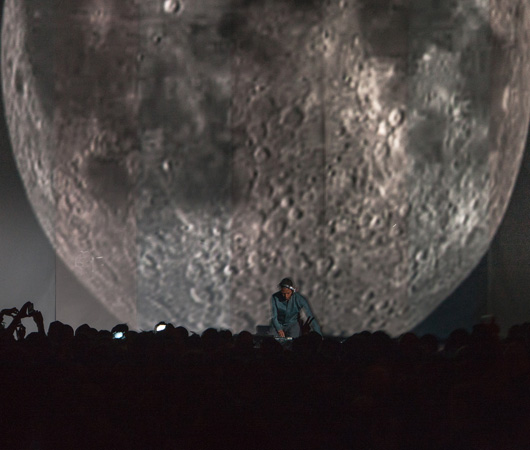 Montreal is just too fucking cute. Honestly, the word picturesque doesn’t do justice to this […]

Montreal is just too fucking cute. Honestly, the word picturesque doesn’t do justice to this place. It’s like a charming wonderland with vintage architecture, cute food, urban greenery (so many trees!), great music, fashionable people, and a laid-back, devil-may-care lifestyle. If it wasn’t for the brutal winters, Montreal might be in serious danger of overpopulation. Of course, among the city’s many accolades is the fact that Montreal is home to MUTEK. Now in its 13th year, MUTEK continues to be one of the most cutting-edge festivals on the planet, an impeccably curated event that brings together innovators from the worlds of technology, visual arts, and music and explores the interesting territories where their efforts overlap. Of course, part of that exploration includes the presentation of a whole lot of electronic music, which is probably why XLR8R was invited once again to take part in the festivities.

Following a lengthy journey to Montreal, there was only time to attend the first day’s final event, which happened to be the kickoff of the nightly Nocturne series. Local outfit DKMD opened up the evening, a boy-girl duo which makes a pleasant brand of synth-pop. Incorporating bits of moody new wave, Morr Music’s more pop-oriented offerings, and even electroclash, DKMD offered propulsive, if not terribly original tunes that appropriately warmed up the proceedings. Singer Marie Davidson’s plaintive, emotive vocals often took center stage, which often worked quite well, even though her subtle dramatics didn’t always jive with the pair’s clubbier numbers.

Next up was Brooklyn duo Blondes, who promptly stole the show with their unique brand of slow-motion techno. Blondes’ music is filled with heavy kicks and plenty of nods to old-school rave, yet still manages to convey an odd sense of serenity. Punched out on an array of drum machines and other gear, the pair’s set was deliberately paced and subtly hypnotic, as the duo allowed its songs to slowly crest and build as the songs’ cosmic melodies slowly unraveled. Vintage and analog—or at least analog-sounding—without being kitschy, retro, or contrived, Blondes delivered a phenomenal set.

Unfortunately, that momentum was quickly squashed by the evening’s headliner, Apparat, who performed with a full band. In all fairness, it wasn’t bad music per se, but one couldn’t help wondering exactly what it was doing at MUTEK, because if Apparat wasn’t involved, it’s unlikely that this kind of sub-Radiohead melodramatic pop would have found its way to the stage. Full of ringing guitars, soaring melodies, and rockish bombast, the most apt comparison would have been a band like Explosions from the Sky. Granted, the room was quite full during Apparat’s set, but the lack of energy was palpable, as it’s doubtful that many folks came out to see a live rendition of what sounded like castoffs from the Friday Night Lights soundtrack.

The second installment of MUTEK’s nightly Nocturne series was spread over two venues, with Red Bull Music Academy curating a bass-oriented lineup at the SAT, while a crew of more techno-leaning acts took the stage at Métropolis. The evening began at the former spot, with Canadian duo Sibian & Faun playing a live set for a small but enthusiastic crowd. That enthusiasm perked up especially quickly when the pair dropped “I’m Sorry,” its R&B-inflected single which dropped on Numbers late last year. The remainder of the set, while unfamiliar, featured a similar array of warbling synths, off-kilter drum patterns, and chopped-up vocal bits.

After sampling Sibian & Faun, we moved over to the always-impressive Métropolis, a large two-level theater that offers incredible acoustics and several different places to take in the music. The audience was still trickling in when Shackleton took the stage, but bodies quickly began moving as he rolled out an onslaught of complex rhythms. Most in attendance were expecting a challenging set of dark and dubby sounds, the Skull Disco co-founder was surprisingly playful and upbeat in his selections, injecting a bit of techno bounce into his assault of clacking, tribal percussion. Slowly building in intensity—and, most importantly, volume—over the course of his set, Shackleton shifted tempos and unfurled winding basslines beneath the thunderclap-like drum patterns, which he also punctuated with waves of white noise and twisted vocal snippets. As is always the case with Shackleton, it’s hard to say exactly what he was doing in terms of genre—although fans of drum-heavy, old-school dubstep would have certainly been happy—but there’s no question that his music was incredibly engaging.

Once Shackleton wrapped up, we darted back to the SAT for the final minutes of Shlohmo. The LA native and current New Yorker was certainly banging it out at this point, to the delight of those in attendance. There were lots of hands in the air as Shlohmo combined hard-hitting 808 drum sounds with big bass, ravey synths, and the occasional hip-hop acapella. That said, his set wasn’t all big-room bravado, as he closed things out with a mellow number from The Weeknd.

As the clock struck midnight, Salva climbed onstage for a live set. The Frite Nite label boss is always unpredictable, as his musical wanderings cover a large swath of the electronic spectrum, but on this evening he definitely followed Shlohmo’s lead and stayed in the more banging, hip-hop flavored end of the pool. Make no mistake, it wasn’t all hip-hop, but the percussion, regardless of what tempo or genre Salva was exploring, was clearly rooted in drum-machine sounds and slamming rap beats. In short, there was no shortage of 808s. That said, over the course of an hour, he also sprinkled in woozy electro-funk synths, ghetto-house acapellas, massive DMZ-style basslines, and hyperactive, juke-inspired drum patterns. Hints of house and techno were also at work, but there was very little four-to-the-floor happening in this particular Salva set.

The idea of a bass-music supergroup seems a little silly, but what else can one call Nouveau Palais, a collaboration between Lunice, Ango, and Prison Garde. The trio dropped a free EP earlier this week, and this performance at MUTEK was meant as a sort of coming-out party for the release. In fairness, the fact that these guys hadn’t played a whole lot together was definitely evident, as the music lacked direction at times and the sound was occasionally a bit muddy. That said, there was plenty to enjoy in the group’s set, which combined bright synths and R&B-flavored percussion with Ango’s fey vocal stylings. Occasionally changing up his soaring melodies by running his voice through funky, talk box-style processing, Ango provided a uniquely dynamic element to the proceedings. When the trio moved into housier territory, the results were particularly good, sounding like a less polished and slightly hyperactive Jacques Greene. While it’s uncertain whether or not these artists’ busy schedules will ever allow Nouveau Palais to become a fully realized project, there is potential here.

At this point, the call of Jeff Mills was simply too great, prompting a return to Métropolis. The Detroit techno giant was presenting a show called The Messenger/Sleeperwakes, a narrative which seemingly involved the moon and lots of hard, punishing techno. As always, the man was uncompromising in his approach, rolling out an assault of driving, propulsive techno. Aside from the inclusion of some sprialing, tweaky synth sounds, the music was almost entirely devoid of melody, as Mills instead assembled a complex lattice of rhythms using an impressive five-CDJ setup. Incredibly precise in his mixing, Mills cooly oversaw the proceedings—and barely looked at the audience—as his thunderous drums hammered away with the machine-like efficiency of an industrial factory. Often hailed as a master of his craft, he showed why he is worthy of such accolades on this evening.

Look for Part Two of our MUTEK 2012 Wrap-Up, along with interviews with several MUTEK artists, next week.