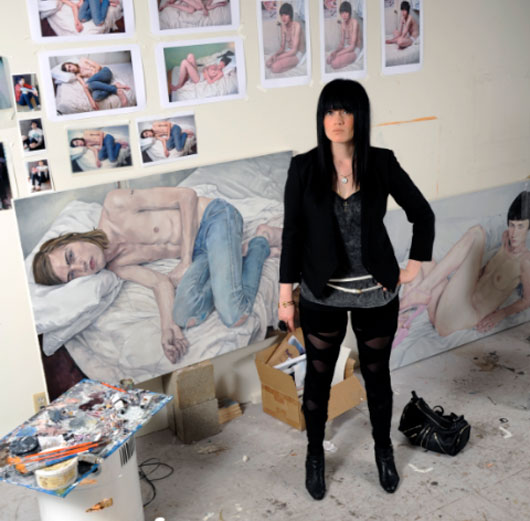 Matteo Callegari
Shot in his studio at Hunter College, NYC

Matteo was born in Northeastern Italy, in the small town of Latisana, but high-tailed it to New York seven years ago to concentrate on his art. Matteo is being hailed as part of a resurgence of abstract painting in the Big Apple, with a chaotic feel and a grey-meets-neon color palette that echoes the NYC streets. While attending the Hunter College MFA program, Matteo debuted in the group show Forgotten in the Smile at Envoy Enterprises. In spring, his messy abstractions will be on view at London’s Hannah Barry Gallery.

Erik Lindman
Shot in his studio in Harlem

Hotshot abstract painter Erik Lindman didn’t go to grad school, but he didn’t have to. This Downtown devil has already been in several group shows, and curated a few of his own: Bring Me Back a T-shirt and House Wine, House Music, both at NYC’s V&A Gallery. Not bad for a smart-mouthed 24-year-old.

Ryan Schneider
Shot in his studio in Bushwick, Brooklyn

This sharp troublemaker attacks his large canvases with a wolf-like abandon: They often feature layers of paint and texture, scraped away bits, drips, and errant bits of text in provocative candy colors. It’s like being inside one of Van Gogh’s fever dreams—if Van Gogh had been a hedonistic New York aesthete with a taste for fine wine, fine women, and LSD-fueled weekends in the Hudson River Valley. Ryan has shown in Los Angeles, Denmark, Germany, South Korea, Canada, and is represented by Chelsea gallery Priska Juschka; his new show, Send Me Through, is on view there through February 20.

This dapper young man seems to be everywhere and know everyone. His work consists of strange scrawlings and installations of found objects that wouldn’t be out of place in a Town & Country pictorial on fallen aristocracy. His works often have dramatic, absinthe-soaked titles: “By Request, My Epitaph” and “This is a Pasttime Known as Mine vs. Yours” among them. James is represented by downtown NYC gallery Envoy.

Kelsey Henderson
Shot in her studio in Williamsburg, Brooklyn

Kelsey is a painter specializing in lifelike portraits of alluring and beautiful young individuals in all their languid glory. A striking black-haired, blue-eyed vixen (she looks not unlike those she paints), Kelsey’s caught the eye of the rock ‘n’ roll cognoscenti—she’s painted Smashing Pumpkins’ James Iha and The Kills’ Jamie Hince, and Courtney Love raves about her on Twitter. Henderson says her paintings explore the idea of the “platonic crush,” but what really elevates the work is technique, talent, and a color palette that suggests the hard, white winter light that streams through your windows after a particularly long night out.

Upcoming shows:
Feb. 12th, New Works by Emerging Artists in Drawing and Painting, 3rd Ward, Brooklyn; Feb.18th: This is Not an Invitation to Rape Me, Fox Gallery UPenn, Philadelphia; and a show in September at the Mahan Gallery, Columbus, OH.

Gretchen Scherer
Shot in her studio in Bushwick, Brooklyn

For her senior show at Hunter, Scherer showed paintings from the point of view of being drunk and wild at 3 a.m. in Gotham City. Recently, she’s been working in highly detailed mixed-media installations and dioramas, and exploring themes of haunted houses and ghosts. She’s lost none of that NYC edge, though—it probably helps that her night job is bartending at the downtown den of iniquity known as Happy Ending.

Laura Flook
Shot in her studio in the East Village

Laura is a mortician. Laura does not like to be touched. Laura once wore a hospital gown to the bar as a dress. She is an eccentric, wondrous creature seemingly descended from Oscar Wilde and Sylvia Plath with the clothes to match—the items she makes have a dark Victorian sensibility that have you reaching for a hearty swig of laudanum. Laura is pictured next to her designs.

Laura wears dress, pants, and gloves of her own design.