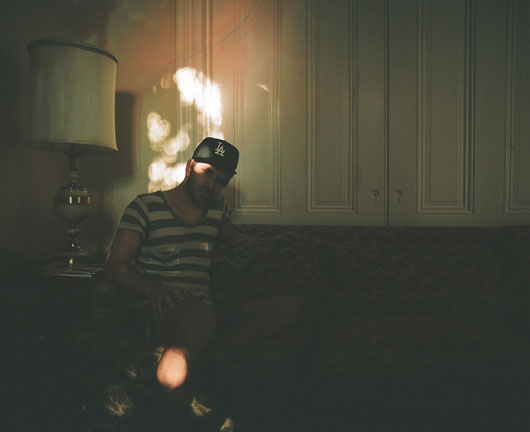 San Francisco producer Christopher Greenspan wants to make sure that people don’t mistake his moniker (spelled oOoOO, but simply pronounced “oh”) as an intentional act. “Actually, I hate the name,” he says, cradling a cup of tea at a local cafe. “It got me grouped in with other obscure, unpronounceable names, which then got me grouped into the ‘witch house’ genre. In reality, the name came from when I was putting songs on MySpace, and I just put in a bunch of Os.”

While Greenspan’s ethereal productions may occasionally share heavy, manipulated hip-hop beats and dragging, distorted synths with other so-called witch-house artists, Greenspan tends toward samples and airy vocals to guide his melodies. “What I do is poppy electronica, in my mind,” he says. “It’s not a clear aesthetic that I was trying to achieve. Some people say they hear songs in their head, whereas for me, it’s a lot of hours of experimentation.” For example, with a track like “Mumbai,” an Indian-tinged piece from his self-titled debut EP on Tri Angle, “everything started with a drum track, just playing it on a loop and experimenting with synths over it,” he explains. “I thought it was almost done, but then I put the vocal sample in, and I think that’s the strongest part of the song.”

Though this process explains why Greenspan might not be as prolific as his contemporaries, he admits that “there’s definitely a lot of pressure to compromise the amount of time and thus the quality of what I’m putting out.” While an LP is in the works, it might take more than a year to create nine songs, he reasons. Even in the here and now, Greenspan feels the pressure to keep pumping out remixes: “I’ve been doing some stuff for major-label artists where there’s a clear deadline. They’re offering a lot of money, and I can use the money, but sometimes I’m not feeling it after a couple of weeks, and I have to turn in something I’m not happy with.”

While these might seem like the regular growing pains of an emerging producer, it’s clear that Greenspan is sincere in his self-imposed demands for quality. “I played in a lot of other peoples’ bands for years, but at some point, I just decided to do my own thing,” he says. “I like a lot of leftfield electronica along with radio pop music, and I felt like people weren’t combining the two in a satisfying way.” But with his juxtaposition of gauzy synth work, otherworldly vocal elements, and chunky beats, Greenspan is definitely meeting his own demands, as well as pleasing fans of weird electronic music, no matter what silly name journalists want to give it.

oOoOO is out now on Tri Angle.