Remember that nasty volcano in Iceland a few months back? Well, on top of the […] 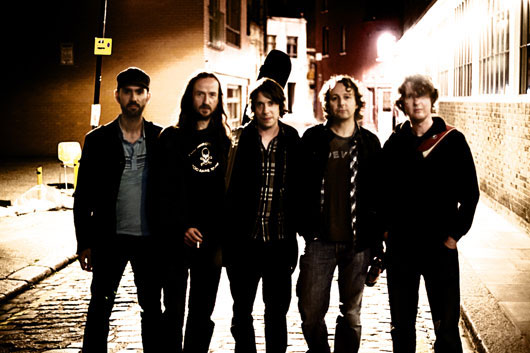 Remember that nasty volcano in Iceland a few months back? Well, on top of the […]

Remember that nasty volcano in Iceland a few months back? Well, on top of the destruction it wrought, it also managed to postpone the US tour of recently reunited UK shoegaze heroes Chapterhouse. So today, as they embark on their rescheduled tour with Ulrich Schnauss, we check in with head man Andrew Sherriff for some (really) breezy chitchat about, well, you know… stuff. Hey, did we mention Chapterhouse is on tour starting tonight?

Where did you get the name Chapterhouse? It always sounded like a publishing company to us.
Andrew Sherriff: Didn’t expect to ever have to answer this one again! It came from an appendix to The Doors of Perception by Aldous Huxley called ‘Heaven and Hell,’ which explores different routes civilization has taken in obtaining similar effects to his Mescaline experiments but without drugs. He suggests that the ornate gothic architecture of the Chapterhouse at Southwell Minster is capable of inducing a transcendental experience purely by looking at it. Back then, we had things that were a little more efficient than a building, but have to agree that it does sound like a publishing company.

What are you listening to these days?
No specific genre or scene. This and that.

How about as you type this?
Nothing. I quite enjoy silence nowadays.

So, that volcano whole thing… sucked, eh?
Yep, amazing how much disruption it caused.

What had to happen before Chapterhouse could reform?
We needed to make sure that when we played together again, it didn’t sound like we were going through the motions. It didn’t, so here we are.

Did you guys ever have beef with other shoegazers?
Not really. I’m sure there probably was a healthy rivalry; there is between all bands.

Okay, who wins in a fight (and why)? You, Kevin Shields, Neil Halstead, or Alan McGee?
We’re not into violence.

What have you been doing these last few years?
Making audio for media.

What can you never leave home without?
My shoes.

The last three books you read were. . .
William Boyd – Any Human Heart
Bob Dylan – Chronicles
(to my children) Enid Blyton – Five on a Treasure Island

Say Chapterhouse were to make a new record today. What would it sound like?
Abstract and jagged.

And who’d remix it?
No one.

And what are you happy is long gone?
Being skint.