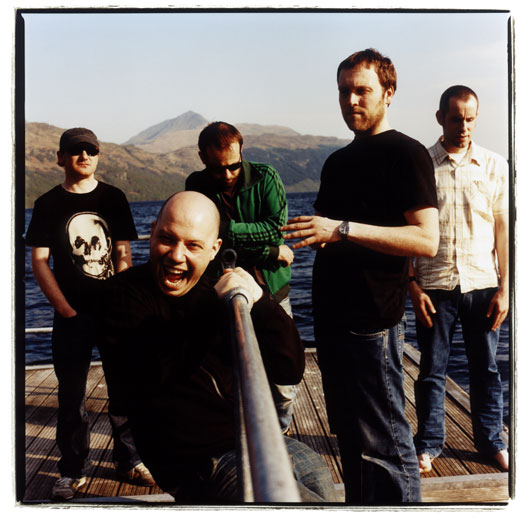 Love ’em or hate ’em, the endearingly brash post-rock hooligans of Scotland’s veteran instrumental export, Mogwai, are an inspiration for aspiring and seasoned musicians around the globe. The five-piece has more or less maintained its core roster since the release of its monolithic debut album, Young Team, which has always lent the band’s cinematic music a tight-knit sense of kinship. Fourteen years, seven studio albums, two film soundtracks, and one live DVD later, Mogwai is still a brotherhood, something which remains glowingly apparent in the 10 eclectic compositions that make up its latest LP, the excellently titled Hardcore Will Never Die, But You Will. We got a chance to catch up with Barry Burns as he and the rest of the clan geared up for another world tour, and the multi-instrumentalist let us in on the band’s top five favorite beers, how much he loves Frank Black, and why one should never order “The Mogwai” at the pub.

What can you see and hear when standing outside of your recording studio, Castle of Doom?
The last time we were there recording the album, we saw yellow police tape and many police officers as there had been (another) murder in Glasgow. You can usually hear the sound of a building site. It really is in a horrible area.

Mogwai has been an institution in the instrumental/post-rock scene since the mid-’90s, surviving well into the digital revolution. When did you first become the victim of album leaks and illegal downloading?
I honestly can’t remember, but I think it was probably Rock Action, as people seemed to know the songs when we played a concert [before] the album was out.

Any good, new bands coming out of Glasgow these days?
Yeah. Remember Remember, Errors, and Moon Unit to name three.

If there was a drink called “The Mogwai,” what would be in it?
Vomit, tea, and whiskey. No straws.

Your discography only boasts one remix album. When can we expect Kicking a Dead Pig Vol. 2?
Not really sure we’ll do another one, but who can say?

If you were ever to allow your albums to be pilfered for use in a television series, what would the show have to be about?
The complete annihilation of all religion. Is that too much? Eeeeeeek.

Any thoughts on Mogwai’s imitators?
It’s kind of flattering as much as it is pointless. A lot of bands need a starting point, and as long as they go on to do something original, then it’s totally fine by us.

In the press release for your latest record, Hardcore Will Never Die, But You Will., you say the title is “ned-inspired.” What exactly is a “ned”?
The etymology of the word is a bit unknown, but it is possibly an abbreviation for Non-Educated Delinquent. A west-of-Scotland teenage troublemaker, bored [with] nothing to do in the streets other than piss people off with their stupid behavior.

We already know that “Blur Are Shite.” Tell us who else are shite.
No, no—we love everybody these days. We try not to bash people anymore. It’s old behavior. A bit like a ned.

Who’s the creep on the cover of Come On Die Young?
That would be our bass player Dominic. Or Demonic, in this case.

At this point in its history, Mogwai seems to have done everything. Name three goals you still hope to achieve before the band is through.
Franchise the band so we can stay at home with our families and let impostors play our concerts for us. Play a concert with Funkadelic. Do a soundtrack for another film.

The title for Hardcore‘s last song, “You’re Lionel Richie,” is a quote from an inebriated encounter with the legendary musician. What other celebrities have you drunkenly approached?
Frank Black. But I was, in the end, too shy to speak to him. I love him.

Before settling on Mogwai, what other band names were tossed around?
I think that was the first and last suggestion. At least until something better came along.

Hardcore Will Never Die, But You Will. is out now on Sub Pop.