Since the early ’90s, Luke Vibert has been an institution of the UK’s experimental dance […] 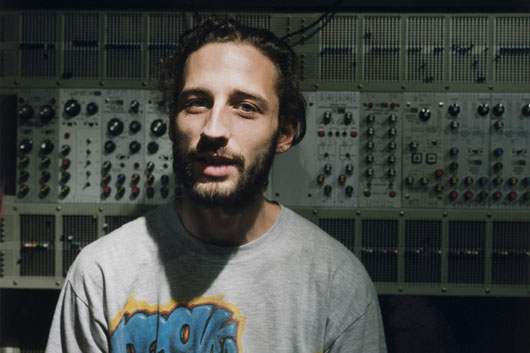 Since the early ’90s, Luke Vibert has been an institution of the UK’s experimental dance […]

Since the early ’90s, Luke Vibert has been an institution of the UK’s experimental dance music scene, holding his own alongside fellow veteran heavy-hitters like Aphex Twin, Squarepusher, and ?-Ziq. The prolific artist has delivered an almost non-stop stream of quality singles, EPs, and LPs—under a variety of handles, including Plug, Wagon Christ, and his given name—during his nearly two-decade-long career, the latest of which dropped this past Monday via Ninja Tune. With the new Wagon Christ LP, called Toomorrow, out now, we decided to have a little e-chat with Vibert. He told us about the first electronic track he ever made, why he loves “UK hardcore rap” so much, and what he really thinks about Kid606.

What can you hear while you answer these questions?
The television in the background. A show about antiques—oh, the adverts have just started now.

If there was a cocktail called “The Wagon Christ,” what would be in it?
Some kind of liquids, I suppose, but I wouldn’t know. [I’m] not much of a drinker.

If you could only produce one style of music for the rest of your career, which would it be: jungle, drum & bass, or acid? Why?
I wouldn’t or couldn’t! I’d rather not make any [music] than be restricted like that.

What new producers are you digging these days?
Hmm… Can’t think of any, I’m afraid. I only listen to old music and some by my friends (Aphex Twin, Squarepusher, Ceephax, Ed DMX, Tipper, Mark Pritchard).

What’s the name of the first track you ever made? What did it sound like?
Hard question! I was in dodgy bands when I was young (from age 13 to 17), and we made some demos recorded in cheap studios. I think the first electronic track was called “Casid,” from 1989, and it was me and my friend Jeremy Simmonds trying to make acid house with only a cheap Casio keyboard. It sounds very strange, but I still like it. 🙂

Still got any gear left from when you first started producing?
Oh yeah, almost all of it. The only thing I don’t have is my Yamaha DX-100 that broke. 🙁

What are some of your favorite vocal samples that appear on your new Wagon Christ album, Toomorrow?
My faves are probably in the track “Sentimental Hardcore.” They’re the voices of my kids when they were babies (now they’re aged eight and 10!).

Describe a Luke Vibert performance in the early ’90s.
Pretty frighteningly similar to now, really! I only ever DJ (no live sets), so the only thing that’s changed is that I play off my laptop instead of records. I have a much wider choice now. 🙂

That mix of “UK Hardcore Rap” you did last year is totally awesome. What inspired you to put that together?
Thank you! [UK rap] is something I’ve loved since it started. I didn’t want people to forget that once upon a time it wasn’t just about having massive commercial success, as it is now, but about making interesting, challenging, and brutal music!

Who’s the artist behind Toomorrow‘s crazy cover illustration? How did you find him/her?
Thanks. That’s my friend Cel. He’s made the last couple of Wagon Christ LP covers, and the music videos for “Receiver” and “Shadows” with the help of some other friends. Now he’s making a video for “Chunkothy” from the new LP. I can’t wait to see it!

For the Warp20 (Recreated) compilation, you did a new version of “LFO” by LFO. Which tune of yours would you like to hear covered, and by whom?
Hmm… Not sure if I’m that bothered, but it would be funny to hear a band trying to replay something complicated!

Kid606 once named a song “Luke Vibert Can Kiss My Indie-Punk Whiteboy Ass.” Your thoughts?
I like Miguel [De Pedro]—he’s a top man. He’d just sampled a track of mine (that I did under the name Plug), and the title reflected his punky attitude! It was like him saying, ‘Come and sue me then!,’ which I really respect! (So I didn’t!)