Oval: With Two New Records, the German Glitch-Techno God Takes it Waaaay Back to Basics. 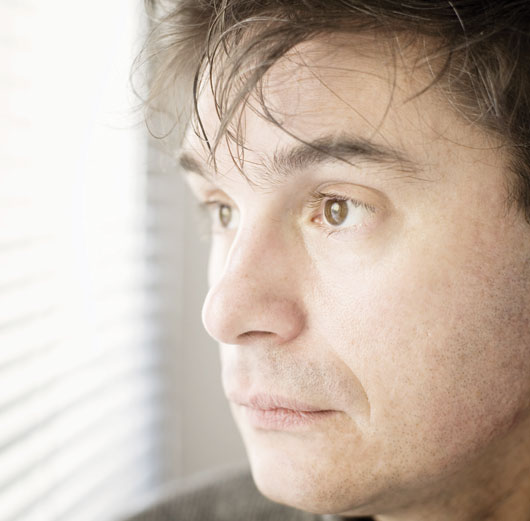 Oval: With Two New Records, the German Glitch-Techno God Takes it Waaaay Back to Basics.

Fifteen years ago, Germany’s Oval caught our ears by physically damaging CDs and mining alien beauty from their skips and loops. Their classic albums, Systemisch and 94 Diskont, wrote the book on what would become “glitch” techno. The group later shrank to just frontman Markus Popp, who went on to create sublime psych-noise albums and design audio software for his Ovalprocess sound-art installation. All of which makes the production for the double-album O and the EP Oh, his first two records in nearly a decade, quite startling. The frontiersman of yore went low-tech by choosing cheap, off-the-shelf software and an old PC. Popp also performs with “real” instruments (as in electric guitars and drums), but his matter of piecing their sounds into contorted fragments is unmistakably “Oval.” XLR8R thought he had some explaining to do.

XLR8R: What drove you to produce the two new records using cheap software and a five-year-old PC? Was it a matter of defiance against the norm for many artists who always choose high-end software and gear?
Markus Popp:
That’s merely the setup I ended up with. Plus, I never quite came to terms with [Mac] OSX. But there is definitely no programmatic statement behind these two unrelated facts.

What was your basic studio equipment setup for Oh and O? Were there any major challenges?
My studio setup was a PC (WinXP), Ableton Live, consumer-level audio interface, several instruments (real and virtual), some plug-ins (all commercial, none custom), and a wide range of real-time controllers (drum triggers, faderboxes, keyboards). In retrospect, my old approach looks like an almost irresponsible waste of time. I spent outrageous amounts of time to reconstruct my music from almost arbitrary fragments of music—which were not at all easy to come by, by the way. At that time, it was important for me to achieve my musical results exactly in this way—programmatically and practically—because I wanted to prove this could still be “music”—and I guess most listeners were with me at the time. So, mission accomplished? Sure, but how about skipping all this crazy overhead and start with music in the first place? In practical terms, however, this turned out to be much easier said than done. “Why not just start with music?” pretty quickly turned out to be a long journey. Learning a “musical” skill set suddenly teleported me into a huge universe full of new responsibilities… with an uncertain outcome. Who knows, I might simply turn out to be bad at writing songs. Still, I was absolutely determined to make it happen, because “music” as a backdrop has so much more room for future expansion than the often only theoretical “creative headroom” of music technology. From here on out, I am very much looking forward to evolving my music like a band would. Funny… these days, there are definitely moments when I think that music is all about the software you don’t use. And that harmony and melody are more effective weapons than any disruption of sound.

What was the basic recording and mixing process for your new records?
I’ll get this out of the way first: I don’t do any mixing. At least not in the sense of “from rough mix to final mix” or “auditioning and comparing different mixes.” I merely arrange the song parts on the timeline after balancing volume, structure, and frequencies in the session view. And since almost all my songs have a fixed number of elements, things never get too complex. This way, it’s clearly apparent which track still needs exactly one or the best part in the “bass” column, instead of getting carried away with blindly recording 20 bass parts which then never stand a chance of actually making it into the track. The actual recording process was pretty standard—for a “real” musician, I guess. No more “I’ll start with this for now, I can always create iterations of it later,” but instead, it was all about recording many takes, muscle memory, and naming the best recordings—the latter sometimes being the hardest part. And while the old Oval stuff was composed out of tiny fragments like stop-motion animation, the recordings on Oh are live improvisations, sometimes several minutes long.

Are there plans to continue working with the O and Oh setup, or are there other studio processes or gear that you’re experimenting with?
Both records add up to a debut album of sorts. And, like the first film of someone who never actually owned a camera but spent years envisioning his first film before shooting it, [O and Oh] carry forward a strong, confident narrative and are chockfull of ideas. But of course some things are still missing, while others were probably a bit overdone.

Oval’s O EP is out now in a limited vinyl edition, and O will be released in September, both on Thrill Jockey.