Polishing Gems: Emeralds Changes Up the Formula for Its Latest LP

In 2010, the then entirely Cleveland-based trio of John Eliot, Steve Hauschildt, and Mark McGuire […] 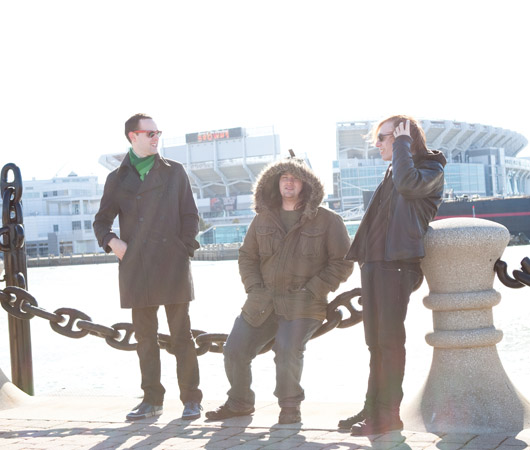 Polishing Gems: Emeralds Changes Up the Formula for Its Latest LP

In 2010, the then entirely Cleveland-based trio of John Eliot, Steve Hauschildt, and Mark McGuire […]

In 2010, the then entirely Cleveland-based trio of John Eliot, Steve Hauschildt, and Mark McGuire (collectively known as Emeralds) concluded a virtually non-stop string of releases with Does it Look Like I’m Here?, a tenderly sprawling record capping a run that began in 2006 and yielded no less than 17 tapes, CD-Rs, and legitimate albums from the group. As McGuire, the guitar-wielding member of the outfit, puts it, Does it Look Like I’m Here? was, “the culmination of scrambling in the studio constantly for four or five years,” before adding, “Basically, our lives were recorded in real time from 2006 to 2010.” Since then, however, Emeralds in many ways has become a different band than it was during that five-year stretch. Most importantly, no longer are its members simply three dudes from neighboring Cleveland suburbs listening to records, getting stoned, and making music together. These days, they are well on their way to becoming accomplished musicians and producers, with each exploring a variety of solo interests. In the case of McGuire, the transformation has been even more dramatic, as he’s embarked on a life largely lived outside of his native Ohio. Still, even as the members’ collective relationship has changed, and the group’s music has undertaken some large evolutionary transitions, Emeralds’ latest album, Just to Feel Anything, somehow still effortlessly taps into the band’s keen understanding of distinct, genuine, and constantly surprising ambient music.

As the story goes, after Does It Look Like I’m Here? and the subsequent extensive touring schedule that followed, Eliot, Hauschildt, and McGuire did not write much music together. At the end of it all, they had embarked on four or five tours, but there hadn’t been much recording, as a number of solo projects and other musical efforts had taken up the trio’s time and attention. Eventually, as McGuire tells it, he made the call to say that he was itching to work on some new material as a group. “There was a point where I was really psyched on a bunch of stuff I was recording at home in Portland,” he says. “But [I thought to myself that] if I was hanging with those guys right now, [the results] could be really, really sick.” After some planning and scheming, this past June found the three members at Tangerine Sound, a studio in the town of Akron, Ohio—a city less than an hour’s drive away from Hauschildt’s and Eliot’s Cleveland base. As McGuire explains, “The initial idea was to have a place where we could constantly be recording.” Whether that would be a practice space or a house, McGuire says the group felt it was important to find, “a place where we could shut the rest of the world out and focus on the music, because when we’ve done that, we can get way deeper and end up with a lot more interesting results.” Ultimately, all the artistic and economic concerns lined up best for the band to hunker down in the windowless Akron studio, where Just to Feel Anything would be put together over the course of a month.

“There wasn’t a concept going into the album that we wanted to fulfill,” explains Hauschildt. “I think the concept, if there is one, arose out of the conditions we were placed in when we were recording in Akron. Things were just run down and there were a lot of dead malls, hollowed out buildings, and stuff like that.” From the sounds of it, when the three of them showed up to the studio last June, there wasn’t much of a plan other than to simply make music. Ostensibly, they would lock themselves in the studio and jump full on into recording with the help of friend and engineer Andrew Veres for three or four days straight, working late into the night and usually all the way into the early morning. The group did head back to Cleveland every so often to get some rest, but the surroundings and routine Emeralds had chosen clearly had a major impact on the record—McGuire speaks of the trips to and from Akron as “episodes of a TV show,” the opening credits playing as they entered the last leg of the trek from Cleveland to the studio and ending when they emerged from their self-made cocoon days later. Eliot too acknowledges the effects of the process on the mood of the music, explaining, “The surroundings will always play a big role in the music created in a situation like recording an album… We would usually hit our stride between 3 a.m. and 6 a.m. and we didn’t really see much sunlight, which [is something] I think really wore off onto the album.” Seeing as the LP was conceptualized, recorded, and mixed entirely within this month-long studio session, the roots of Just to Feel Anything lie in these experiences.

From the very beginning of the record, “Before Your Eyes” signals a more commanding Emeralds with its mighty chords, soaring guitar lines, and the group’s first recorded use of a drum machine. “I bought a TR-808, and I figured I should probably use it,” says Eliot, before explaining how he attempted to utilize the legendary machine in a way that was comparable to a drummer joining the band. After all, he was simply thinking, “Why not try something different?” In many ways, the 808’s rhythmic presence (which can be heard on about half of the record) plays into an aesthetic shift that Just to Feel Anything documents—Eliot, Hauschildt, and McGuire sound more focused, sonically speaking, than ever. The elements each uses are bolder and clearer than in the past, and, in comparison with past Emeralds output, the productions here are considerably pared down. There was a time when indistinguishable piles of sound formed much of the group’s mass of audio, but now, fewer sources are being sculpted into wider ends. This, it turns out, was entirely by design. McGuire again helps explain, stating, “We put more of our attention into the detail and being more minimal. On our last couple of records, we were adding more and more elements; we’d play our parts and then just kept adding stuff to see how it sounded and would usually keep most of it. But this time, it was more like making one sound really cool before working on the next one.” Eliot provides more insight into exactly why that was the case this time around, saying, “You can’t just think of a sound and make it instantly appear. There is a lot of time and energy that goes into finding these sounds in your mind and somehow pushing them out into the instruments. Many times, you’re messing around with something and accidentally arrive at something very interesting, and it makes you step back. If you’re not careful with an instrument, it will start to play you, which can be good and bad.”

“Even though we all individually have an established identity for our work outside of Emeralds, when the time comes to do Emeralds, we do Emeralds,” states Eliot when asked how he separates the role of being a band member from his many other projects. McGuire echoes that sentiment in some ways too, relaying, “It’s an unspoken thing, our band is just something that we all created—we’re the three parents of this weird kid and we all know his deal, but we don’t ever talk about him because it’s instinctual, like second- or third-nature.” In a sense, this may be the key to how Emeralds continues to sound so cohesive as a group, even as its members’ individual sonic aims continue to evolve. For a band that started largely as a collection of talented young men jamming and making sound for nothing more than the sake of it, each contributor has learned to hone his craft toward more specific ends, and furthermore, seems to have no trouble finding ways to seamlessly fit his different skill sets and stylistic leanings together. In part, this may be because in the making of Just to Feel Anything, the members of Emeralds again discovered how their partnership fit together all at the same time. The combination of excitement from not having recorded together in two years, being surrounded by all the new toys housed inside Tangerine Sound (McGuire says it was akin to being a “kid in a candy store”), and the task of making music in an entirely new situation for them as a group no doubt led to a recording process based on discovery. Hauschildt talks of building the songs “piece by piece” with a process that relied on extensive overdubbing to result in sections, rather than with the straight-through, improvisatory approach that defined the group’s earliest output. “We did want to approach it a little differently, and track a little slower and we ended up building the album almost totally linear,” tells McGuire. “We started at the beginning and worked our way through the first five songs before we even knew what was going on.”

Without a doubt, Just to Feel Anything does not sound like any of Emeralds’ past records. McGuire’s guitar is more present and, well, more often sounds simply like a guitar; the mood is consistently more brooding, the sounds a shade darker; and the skittering hats and snappy snares of the 808 are certainly something new to be heard amongst the outfit’s sonic pallette. Still, somehow, there is no mistaking the trio’s newest album for anything other than the work of Emeralds. It’s hard to pinpoint exactly why or how, but Eliot, Hauschildt, and McGuire seem capable of opening new views into their captivating collective spirit over and over again, just through a slightly different lens each time around. “We make music for ourselves and when we go to make a record, we make it for us, to challenge ourselves and to confound our own expectations and predictions of what may happen,” says Eliot. “Anything else that happens outside of that really doesn’t matter.” While their reasons for making music appear to be deeply personal, it’s hard to deny that the Emeralds boys have shown an ability to tap into a vein of ambient music that is easy to appreciate—their music stands up to the most attentive of listeners, while also inviting others to become endlessly lost in the vivid layers which make up the fabric of their aural worlds. To this point, Eliot gets the last word by elaborating, “The aim for Emeralds is to always be moving forward—[to not] look into the past, [to not] repeat things, and to challenge the people who care to listen and follow our trajectory.” So far, it’s been a trajectory that continues again and again to be something worth following.