Record streams, singles, unreleased tunes, and more fill out the space of this week’s Press […] 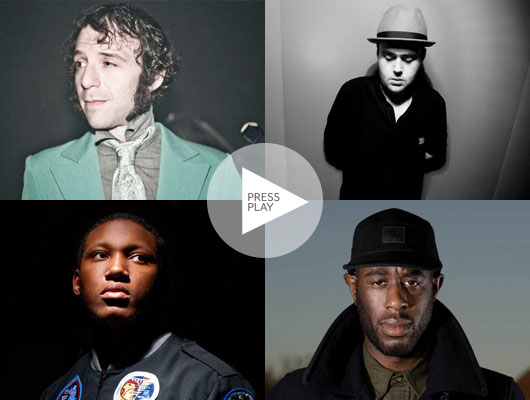 Record streams, singles, unreleased tunes, and more fill out the space of this week’s Press […]

Record streams, singles, unreleased tunes, and more fill out the space of this week’s Press Play, with an array of excellent artists—like Joker, Krystal Klear, D?m-Funk, Fort Romeau, Joe, Daedelus, T. Williams, Ssaliva, Juju & Jordash, and others—contributing their various productions. We think you’ll enjoy what they have to offer.

The SoCal beatsmith known as Daedelus warps “Cartographist” by Canadian synth-poppers Purity Ring into a more upbeat and ominous tune.

Manchester’s Krystal Klear unveils a preview of his forthcoming new single for Mad Tech, the rollicking “More Attention” b/w “My Love is Burning.”

Purple dubstep guru Joker returns after his LP for 4AD with a clip of “Old Era,” a glistening tune set to drop via his own Kapsize label.

Here’s a smooth cover of Prince’s “17 Days” by LA’s undisputed king of contemporary funk, D?m-Funk, lifted from his new EP for Stones Throw, I Don’t Wanna Be A Star!.

Enigmatic UK producer Joe has a new one on the way via Untold’s Hemlock label, and this clattering jam will be on it.

Tiga’s Turbo Recordings has a new EP on the way from London technoist Duke Dumont, called For Club Play Only Vol. 2, and has shared a stream of “No Money Blues” ahead of its release.

Things get a bit ecstatic and unabashedly wide-eyed on this rework of Physical Therapy’s “Drone On” tune by Chicago production duo Supreme Cuts.