It was yet another busy week for new music on the internet, and the latest […] 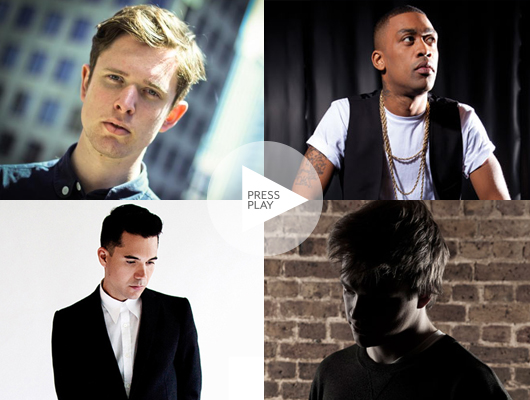 It was yet another busy week for new music on the internet, and the latest […]

It was yet another busy week for new music on the internet, and the latest edition of Press Play is here to round up all of its highlights. James Blake, Matthew Dear, Holy Ghost!, Pearson Sound, DJ Sliink, SCNTST, Mike Slott, and Total Freedom are just a handful of the names who offered up fresh sounds, along with plenty of others. It all can be experienced in full after the jump.

As everyone seems to be doing, recent Mercury Prize winner James Blake reworked a Drake song to his liking, and offered the tune as a free download.

Mr. Mitch’s “response” to the so-called grime war going on lately is this Peace Dubs Vol. 1 offering, a batch of classic grime instrumentals—including Wiley’s “Eskimo”—warped and slowed down by the UK producer.

The week after he dropped previews of his next EP for Hessle Audio, Pearson Sound posted a full stream of barebones title track “Starburst.”

Before his upcoming Self Therapy LP drops via Boysnoize Records, young German DJ/producer SCNTST gave us the premiere of his latest mix.

Tom Demac’s forthcoming EP with vocalist Will Samson is set to drop on November 5 via Will Saul’s consistently solid Aus label, and can now be streamed in full before its release date.

Top-notch producers like Mike Slott, Dam Mantle, Soosh, and Fulgeance, among others, can be found reworking some of Kelpe’s latest tunes on the upcoming Fourth: The Golden Eagle Remixed record.

This week, DJ/producer veteran Brock Van Wey unleashed a stream of one of his forthcoming Earth House Hold tunes, the lush and melodic deep-house sounds of “A Little Late For That Now.”

Holy Ghost’s disco-informed cover of “Hold On We’re Going Home” by Drake is easily one of the better unauthorized versions of the hit single to surface.

Fade to Mind co-owner Total Freedom had his with with Ciara’s recent “Body Party” single, and gave away the haunted, frenetic results as a free download for Halloween.

The soft-voiced singer and co-producer of SETH, Brooklyn artist James K unveiled one of her new solo tracks from the forthcoming RUM EP.

Before his brand-new 12″ drops via Boys Noize’s BNR Trax imprint, Barcelona artist Cardopusher has posted a full stream of both its acid-soaked sides.