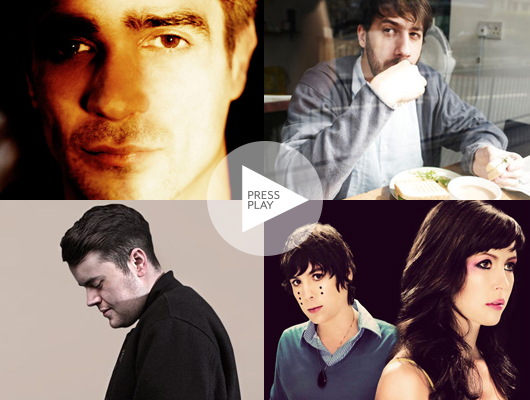 Fresh record streams, quality remixes, lengthy DJ sets, exciting collaborations, brand-new originals, and more fill out the space of this week’s Press Play, and it all comes from an array of excellent artists. Gold Panda, Jon Hopkins, Marcel Fengler, Fatima Al Qadiri, Midland, Glass Candy, Krystal Klear, DJ Haus, Cyril Hahn, and others are behind today’s eclectic list of tunes. Suffice it to say that the music on offer is well worth the time it takes to click a play button or, like, 12, which can be done after the jump.

“Breathe This Air” is a sputtering and gorgeous track from Jon Hopkins’ XLR8R Pick’d Immunity LP, and here, it’s refitted with a wispy vocal by Purity Ring singer Megan James.

Soon after the release of his XLR8R Pick’d sophomore LP for Ghostly, Gold Panda delivered this remix of his “Community” single by label mate and fellow UK producer Fort Romeau.

Though Krystal Klear’s “Addiction” single was released earlier this year via Rinse, it’s apparently getting a re-release on September 2, which is preceded by this 2-stepping remix from Royal-T.

London grime patron Visionist and Brooklyn Fade to Mind affiliate Fatima Al Qadiri teamed up on “The Call,” an unexpectedly beatless and freeform exploration of mood and vintage synth tones.

On the third installment of Peter Van Hoesen’s three-part Receiver series, the Berlin-based DJ/producer is treated to a couple of choice techno remixes from fellow Berliner Marcel Fengler and Italian artist Neel.

Trumpet & Badman (a.k.a DJ Haus & DJ Q) has unveiled its four-track Love Keeps Changing EP for Unknown to the Unknown before the bass- and brass-heavy dancefloor music drops as a limited 12″ this month.

“Ariel” is the forthcoming single from Murlo & Famous Eno, who will release their skewed, percussion-heavy tune via Mixpak on August 20.

Berlin-based up-and-comer Kyson let go of his glimmering and textured contribution to Friends of Friends’ Show Me the Future Vol. 2 compilation before it drops next week.

Almost a year after his 12″ for 100% Silk, Australian hardware enthusiast is ready to drop a record via Modular’s Club Mod imprint, and has shared its raw and rubbery “Tomita’s Basement” to tease the EP’s August 13 release.